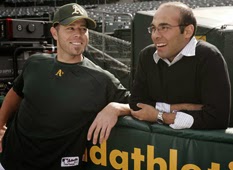 Currently, Zaidi is an Assistant GM with Oakland A's where he has provided statistical analysis for evaluating players available on the free-agent and trade markets, as well as the draft, according to Los Angeles Times. He played a major role in the Athletics' signing of Yoenis Cespedes in 2012. He also assisted on arbitration cases and worked with the coaching staff to analyze scouting reports.

Zaidi was born in Canada to a Pakistani father. He grew up mostly in the Philippines, where he played Little League, and is one of few Muslims in baseball today.

Speaking to The  Los Angeles Times, Zaidi said his interest in the analytic side of the game started to develop when he was in grade school and read “The Bill James Baseball Abstract”. “I bought that book each year and I basically carried it around with me everywhere,” Zaidi said. “Then I think the bookstore realized there was only one customer for the book and they stopped carrying it.”

Those interested in the power of the statistics in picking players should see "Moneyball", a movie based on Michael Lewis's book of the same name. The movie features Brad Pitt playing Oakland A's general manager Billy Beane. Its focus is the team's analytical and evidence-based approach to assembling a competitive baseball team, despite Oakland's disadvantaged revenue situation.
The movie shows Beane letting his young Harvard-educated statistician Paul DePodesta choose players on his laptop.

Farhan Zaidi's new gig as GM of LA Dodgers is yet another sign that Pakistani-Americans are beginning to make their mark in sports and entertainment fields in America. Marvel Entertainment has recently introduced a new Ms. Marvel, a 16-year-old Pakistani-American superhero named Kamala Khan.  A Pakistani-American Kumail Nanjiani is starring in HBO comedy about Silicon Valley techies. Another name is triple-Oscar-winning CGI wizard Mir Zafar Ali. Shahid Khan, a Pakistani-American businessman, became the first non-white owner of an NFL team two years ago. It's good to see Pakistani-Americans entering occupations other than the more traditional professions like engineering and medicine.

From Karachi to Hollywood

What a refreshing post! This is quite the achievement considering MLB's low exposure within the south-asian community.

What you've failed to mention is Farhan's exploits at MIT and Berkely. Quite a sharp brain indeed.


Farhan Zaidi’s résumé sounds almost as eclectic as his background.

He is a Muslim and Canadian of Pakistani descent who grew up in the Philippines. He has two degrees in economics: a bachelor’s degree from Massachusetts Institute of Technology and a doctorate from the University of California, Berkeley.

He has worked in consulting, in business development for a division of a sports magazine, and in the Oakland Athletics’ front office for the last 10 years as a forward-thinking, statistical-minded disciple of General Manager Billy Beane.
-------

With the A’s, Zaidi was widely credited for his part in the signing of Yoenis Cespedes, the Cuban defector who became a star from the time he arrived in 2012.

“He’s absolutely brilliant,” Beane said of Zaidi in an interview with The San Francisco Chronicle this year. “He has a great qualitative mind, but also a creative mind. The ability to look at things both micro and macro is unique, and Farhan could do whatever he wants to do, not just in this game, but in any sport or any business. I’m more worried about losing him to Apple or Google than I am to another team.”

NFL in UK is highly unpopular as such this event will be a waste of time and money.

Imtiaz: "NFL in UK is highly unpopular as such this event will be a waste of time and money"

As one of America's top forensic scientists, Mohammad Tahir, pictured above, uncovered evidence that helped jail boxer Mike Tyson for rape and convict serial killer John Wayne Gacy.
Then Tahir took on his toughest assignment yet - applying his skills in Pakistan. But catching criminals is not Tahir's biggest problem. Rather, it's working with the country's antiquated criminal justice system.
So Tahir, a softly spoken man whose passions are reading and gardening, set out on a quest: to promote forensic science.
"Physical evidence does not lie, it does not perjure itself as humans do," said the dapper 65-year-old. "It is a silent witness ... We make it speak in a court of law."
------------

Members of an investigation unit collect evidence from a possible arson attack at a shoe factory that burned down in Lahore.
Crime scene forensics is a new concept for many involved in law enforcement in Pakistan, a poor nation of 180 million people beset by crime and militancy.
Cases that are brought to court often rely on witnesses who are easily bribed or intimidated. Terrorism and murder suspects often walk free.
---------

Tahir, a dual Pakistani and U.S. citizen, has his own forensics lab in the United States. He spent 36 years working with U.S. police and helped write the FBI handbook on forensics.
In 2008, with militant attacks rising in Pakistan, Punjab's chief minister called Tahir and asked for help: to design a new $31 million forensics lab in the city of Lahore, handpick its scientists and try to enforce new standards of crime solving.

The lab was finished in 2012 and at first, business was slow. But now the lab, which is funded by Punjab state, takes around 600 cases a day, Tahir said. It could easily handle twice that if more police start sending in evidence.
"The police are not educated, they don't know our capabilities. We have to teach them," he said.

The gleaming new lab quickly discovered only a tiny fraction of police knew how to secure crime scenes and collect evidence. DNA samples were mouldy. Guns arrived for analysis, smeared with officers' fingerprints.
"If garbage comes in, garbage goes out," explained one scientist at the lab.

To change that, Tahir set up localised crime scene investigation units and began training police. Now the DNA department says around half the samples they receive are packaged correctly.
"They are getting better," Tahir said. So far 3,100 police out of a force of 185,000 have been trained.
But progress is slow. Punjab Police Inspector General Mushtaq Sukhera said police still secure "very few" crime scenes.
Once the lab makes a report, it goes to the prosecutor. But judges, lawyers and witnesses are often threatened or killed. Courts have a backlog of more than a million cases.
As a result, conviction rates are low. Anti-terrorism courts convict around a third of cases — about half of those are overturned on appeal. Fewer than a quarter of murder suspects are convicted.

As a woman and a Pakistani American, Amanat has made it her mission to redefine what is possible for women and people of color in an industry dominated by white men. Through her work as an editor on comic books like Captain Marvel, Hawkeye, and Ms. Marvel, she has helped reimagine what superheroes can be. Last year, the first issue of Ms. Marvel — a series and character that Amanat co-created with editor Steve Wacker, writer G. Willow Wilson, and artist Adrian Alphona — went into its seventh printing, a level of success that's extremely rare. Earlier this year, Amanat was introduced to National Book Award winner Ta-Nehisi Coates — that initial introduction would later develop into a successful deal orchestrated by editor Will Moss, Marvel's VP of Publishing Tom Brevoort, and Editor-in-Chief Axel Alonso to bring Coates to Marvel and write the new Black Panther comic book series.

"My long title of director of content and character development — I always forget it," she tells me about four weeks after New York Comic Con. I've caught her on a busy Monday.

"That's what my nephew calls me. He's 5 now. It's super cute. I think he's kind of messing with me."

Sana Amanat is the Shonda Rhimes of Marvel comics

There's something poetic about the fact that Amanat is a huge fan of Shonda Rhimes, one of the most powerful showrunners in the television industry and the woman who created the hit shows Grey's Anatomy and Scandal. Rhimes has mastered the art of what Amanat calls the "oh no," the gasp-inducing moments that pepper her sudsy, kinetic dramas. And when you think about it, Rhimes's TV shows, with their hyper swerves and hurtling dialogue, are a bit like live-action comic books.

"You need the 'oh nos.' That's the beauty of serialized storytelling. That's what Shonda does so well," Amanat tells me.

But Amanat and Rhimes have more in common than a love of drama and the utmost respect for Scandal star Kerry Washington. What Rhimes has done for ABC — create great, diverse work that's gone on to inspire more diversity in the network's programming — Amanat is doing for Marvel.

Since her promotion, her editing duties have been streamlined to Captain Marvel, Daredevil and Ms. Marvel, three books she's very passionate about, to make time for an endless array of strategy meetings. Amanat's goal is to determine how Marvel can evolve and make its superheroes more representative and diverse, and then to ensure that it happens. By doing less hands-on editing, she's able to work with the company on a grander scale and across multiple titles.