My good friend and NED University Professor Mohammad Nauman passed away last Sunday. He was a dedicated teacher at NED Engineering University in Karachi. Born on December 19, 1951 in Bahawalpur, Nauman attended Cadet College, Petaro, and then graduated from NED University in electrical engineering in 1974. He attended North Carolina State University for his graduate work.

Nauman was a soft-spoken academic and a left-leaning intellectual of high caliber. He was loved by his friends, colleagues and current and former students spread around the world, including those of us in Silicon Valley.

The last time I met him was in summer this year when I visited the NED University Campus in Karachi. Nauman was very warm and gracious as a host host. We reminisced about our student days at NED in 1970s, and also discussed how NED students can be helped by the alumni in Silicon Valley. One of the projects we discussed involved setting up web conferences where the NED Silicon Valley alumni could bring in experts to speak on various subjects of interest to his students at NEDUET. We also talked about his involvement and work with Koshish Foundation, a foundation set up in Silicon Valley to help students.

He ordered lunch for both of us and then he gave me a tour of the campus. 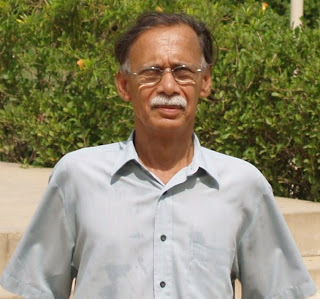 In addition to his academic career and professional involvement with the IEEE, Nauman was a social activist committed to the well-being of the most vulnerable in society. He helped Edhi Foundation to develop its wireless service as a volunteer and served as technical adviser to the defunct Karachi Metropolitan Corporation (KMC) in the early 1990s. He wrote hundreds of research papers on wide-ranging topics such as bonded labor, and water and power and campaigned for the displaced people of Chotiari Dam and other similar causes. He was widely quoted in national and international media.

I have started a condolence page for Nauman on PakAlumni social network.

Readers can share their thoughts at PakAlumni condolence page and I will try and pass the messages on Professor Nauman's next of kin.

Here's a report on how people remember Prof Nauman:

Speaking at the memorial meeting on the city campus of the NED University of Engineering and Technology on Saturday, he said, �Prof Nauman left us when we needed him the most. He was not only aware of his social responsibilities but was also an institution in himself and always strove for the betterment of down-trodden.�

He said that for a long time the people of Pakistan have been condemned to live in a society where irrationality was nibbling scientific thought and Prof Nauman not only fought against irrationality but also told us what should be done in this regard.

Noted Architect and Town Planner, Arif Hasan said that Prof Nauman was anti-establishment and that was his real strength. His biggest legacy was to fight oppression and he had an affinity with the common man and he could rationalise as well, he said.

He pointed out that Prof Nauman worked and researched with him on several issues including problems related to �Katchi Abadis,� Tharparkar, Karachi Electric Supply Corporation, Karachi Metropolitan Corporation and Lyari Expressway to name a few.

Prof Shoab Zaidi said that Prof Nauman enjoyed respect not only in his department but he was also loved by thousands of his students who were dispersed across the world. He was an incredible teacher and his legacy was social justice and education, he said.

Prof Saeed Khan said that Prof Nauman was a multi-dimensional personality and people learnt from his company. He said Prof Nauman had great attachment for the community and although both of them differed ideologically, their objective was people�s welfare. As a teacher, he was a role model, he said, and despite the fact that he was an electrical engineer, he was involved in civil works as well.

Roland deSouza said that Prof Nauman was not only a good engineer but also an excellent teacher. He said that he was a smart man, a �faqir,� a �malang,� and a simple person. He said Prof Nauman realised that panacea lies in simple living and not in consumption. �He was a man of diverse interests and Shehri-CBE was able to undertake many campaigns because of Prof Nauman,� he acknowledged.

Chairman, Department of Architecture and Planning, NED University, Dr Noman Ahmed said that people were usually confined to their specialty but Prof Nauman achieved success in various disciplines and excelled in them.

Shoab Ismael said that Prof Nauman was a perfect teacher and very kind hearted. He said although he was essentially an electrical engineer, he contributed a lot in civil engineering works when Fahimuzzaman Khan was the administrator of the defunct Karachi Metropolitan Corporation.

Human Right Commission of Pakistan (HRCP) Co-Chairman Iqbal Haider said that his organisation benefited a lot from Prof Nauman and he was a committed human rights activist and was against religious extremism.

Trade union leader Latif Mughal said that Prof Nauman played a vital role against the privatisation of the KESC because he was well aware that only poor would suffer if the utility was privatised.

Mustafa Talpur said that the death of Prof Nauman was a challenge to all activists because it was very difficult to replace him. Veteran trade union leader Usman Baloch said that Prof Nauman always defended the interests of workers and even a day before his death he was planning to do something in solidarity with slain activist Nisar Baloch. Prof Nauman�s uncle Arshad Hussain said they were good friends.