N.E.D. University of Engineering and Technology (NEDUET) has been ranked among the world's top 200 universities for "impact" by Times Higher Education. The institution located in Pakistan's largest city of Karachi is ranked among 101-200 in the world. NEDUET also tops the rankings for impact among Pakistani universities included in THE 2019 rankings. The Times Higher Education (THE) University Impact Rankings assess universities against the United Nations’ Sustainable Development Goals (SDGs) to provide "comprehensive and balanced comparisons across three broad areas: research, outreach, and stewardship".

Among other institutions of higher learning, the University of Agriculture Faisalabad (UAF), Ghulam Ishaq Khan (GIK) Institute of Technology and University of Veterinary Sciences Lahore are ranked among 200-300 while COMSATS and Government College University Lahore are among 301+. 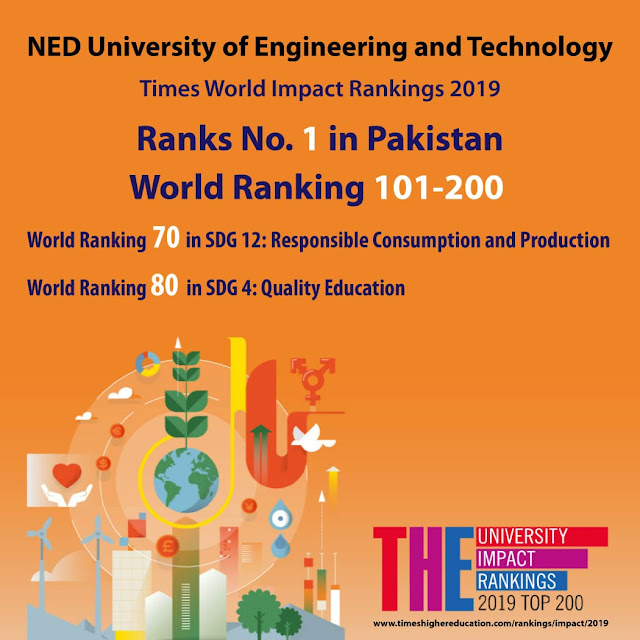 
A university’s final score in the overall table is calculated by combining its score in SDG 17 with its top three scores out of the remaining 10 SDGs. SDG 17 accounts for 22 per cent of the overall score, while the other SDGs each carry a weighting of 26 per cent. This means that different universities are scored based on a different set of SDGs, depending on their focus.

There are three categories of metrics within each SDG:

1. Research metrics are derived from data supplied by Elsevier. For each SDG, a specific query has been created that narrows the scope of the metric to papers relevant to that SDG. As with the World University Rankings, we are using a five-year window between 2013 and 2017. The only exception is the metric on patents that cite research under SDG 9, which relates to the timeframe in which the patents were published rather than the timeframe of the research itself. The metrics chosen for the bibliometrics differ by SDG and there are always at least two bibliometric measures used.

2. Continuous metrics measure contributions to impact that vary continually across a range – for example, the number of graduates with a health-related degree. These are usually normalized to the size of the institution. When we ask about policies and initiatives – for example, the existence of mentoring programs – our metrics require universities to provide the evidence to support their claims. In these cases we give credit for the evidence, and for the evidence being public. These metrics are not usually size normalized. Evidence is evaluated against a set of criteria and decisions are cross validated where there is uncertainty. Evidence is not required to be exhaustive – we are looking for examples that demonstrate best practice at the institutions concerned.

3. Timeframe Unless otherwise stated, the data used refer to the closest academic year to January to December 2017.


Minorities Are Majority in Silicon Valley
Posted by Riaz Haq at 9:10 AM

Riaz are u sure it was Time of US?

Salman: "Riaz are u sure it was Time of US?"

It’s London based Times Higher Education (THE) which publishes its annual rankings of universities. Another org known for such rankings is Quacquarelli Symonds (QS) which is also in UK

The main problem that our universties face is low strength. Universities in Pakistan generally have 4000 students at max. While onaverage International universities have 15000-35000 students. That much number of students mean more funds to hire more P.hd’s, more research publications.

Moh: "Universities in Pakistan generally have 4000 students at max. While onaverage International universities have 15000-35000 students."

Pakistan ka focus should be on younger generation more than big university. I work under EDHi foundation and many many street children in big cities and have no school. One report I show to all politicians but they are very slow for change. Via your website please share in English.

http://cirp.pk/of-all-children-in-pakistan-44pc-are-out-of-schools/
The latest Pakistan Education Statistics 2016-17 reveals that the country has a staggering 44 percent of out of school children (OOSC).
Out of over 51 million children between the ages of 5 and 16 years, 56% children are attending schools from pre‐primary upto higher secondary in both public and private sectors across Pakistan while the remaining 44% children are out of schools.

Thank You
Bilquis Edhi, co-head of the Edhi Foundation

The Higher Education (THE), a weekly magazine based in London that provides the world’s most influential university rankings, in its University Impact Rankings 2019 has ranked 14 Pakistani varsities among the world’s best institutions in different categories including Gender Equality, Good Health and Wellbeing, Quality Education, Decent Work, Economic Growth and others.

This year, Dawood University of Engineering and Technology has also been ranked in the category for Gender Equality. The Times Higher Education (THE) University Impact Rankings assess universities against the United Nations’ Sustainable Development Goals (SDGs) to provide comprehensive and balanced comparisons.

To further strengthen the presence of Pakistani varsities in global rankings, Lahore University on Thursday held the first international seminar on THE Impact University Rankings. The chief guest of the event was Federal Minister for Federal Education and Professional Training, and Federal Minister for National History and Literary Heritage Shafqat Mahmood.

On the occasion, the minister awarded appreciation certificate to DUET Vice-Chancellor Dr Faizullah Abbasi and lauded his efforts for placing the varsity in the rankings.

The VC said that DUET started functioning as varsity in 2013 and within few years the institute has been ranked in the world’s best education institute. “We feel proud. It’s beginning of the success and in the future DUET will try to secure better position”, he said.

#Columbia University #ranking scandal raises questions over sky-high value of an #IvyLeague education. The university drops in #US News & World Report rankings from 2nd to 18th place after admitting to cheating on data submitted. https://finance.yahoo.com/news/columbia-university-ranking-scandal-raises-130038574.html?soc_src=social-sh&soc_trk=tw&tsrc=twtr via @YahooFinance

Caught fluffing its numbers by one of its own professors, one of America’s elite eight Ivy League undergraduate schools admitted handing in homework cribbed to score higher on a placement test.

Columbia University, located in Upper Manhattan, had been ranked the second best in the prestigious 2021 U.S. News & World Report annual ranking, thanks to the use of “outdated and incorrect methodologies.” It has since been bumped down to 18th as a result of the scandal.

The charges are serious given the ongoing debate over the value of a typical college degree in the humanities, given tuition has been among the largest drivers of national inflation. Last month President Joe Biden ended a fractious debate over the hot-button political issue of student debt by ordering a portion of the over $1.6 trillion owed to the federal government to be canceled.

The admission is furthermore extremely embarrassing as academic honesty is considered the cornerstone of higher education. Students found to have cheated on an exam or plagiarized sources without attribution are subject to immediate disciplinary action that often can involve expulsion.

“Anything less than complete accuracy in the data that we report—regardless of the size or the reason—is inconsistent with the standards of excellence to which Columbia holds itself,” the university said in a statement on Friday.

Unlike in other countries, the college one attends is often much more important to potential employers than what degree they received or the strength of their grade point average. Ivy Leagues are considered the benchmark when it comes to teaching the country’s best and brightest young minds how best to analyze problems and arrive at a solution or present a logically compelling argument.

Harvard University, which has long bragged about the number of applicants it receives every year, can charge its students an arm and a leg for their education given it could only accept a record low 3.2% of applicants for its 2026 undergraduate class in April.

‘Bogus rankings’
This culture fosters a heavy emphasis on ranking, boiling down the varied experiences of a university to a narrow number of key performance indicators. Prospective college students and their parents scour the annual special edition of U.S. News & World Report every year before making a decision as to where to apply for admission.

According to Columbia’s own calculations, tuition for this academic year alone costs $65,000; add on room and board, and you’re talking $86,000 with typically three more years still to come before a student has earned his or her undergraduate degree.

Even after adjusting for inflation, nonprofit think tank College Board estimated the cost of tuition at an average private university during the 2020–21 year has doubled relative to where it was 30 years prior. For public universities, it has nearly tripled.

Should a university like Columbia be found not to apply the kind of intellectual rigor expected, it could suffer substantially when attracting the best students and professors, not to mention raising donations from wealthy and successful alumni.

The Columbia professor who flagged the issue
Michael Thaddeus, the Columbia mathematics professor that discovered the inconsistencies, poured scorn on the system of rankings.

“Does it make sense to conclude from this folly that Columbia is the 18th best American university, worse than Cornell but better than Berkeley?” he told Gothamist. “Of course not—that would be ridiculous. The only thing that makes sense is paying no attention to these bogus rankings at all.”