Pakistan ranks among the top 10 countries in terms of tax revenue losses due to corporate tax avoidance, according to UN World Institute for Development Economics.  World Economic Forum estimates that the country lost $10.4 billion in taxes last year. 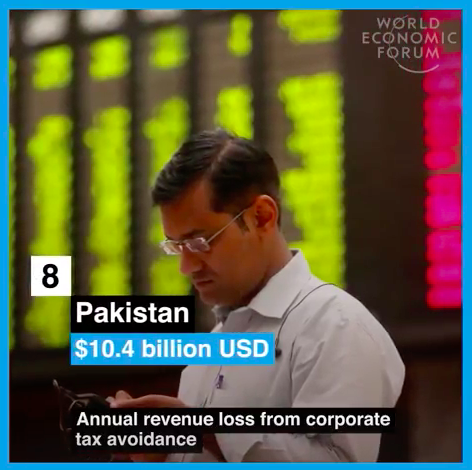 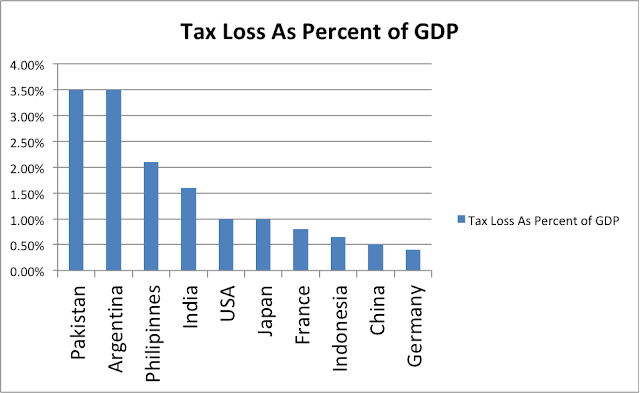 Pakistan and Argentina top this list of 10 in terms of tax revenue lost as percentage of GDP.  Both lose 3.5% of their GDP in corporate tax avoidance, according to World Economic Forum.

Tax Evasion at the Top:

Tax evasion in Pakistan starts at the top. A large number politicians, including ministers and party leaders in the nation's parliament, do not bother to file tax returns or pay taxes.

A study by the Center for Investigative Reporting in Pakistan (CIRP) identified 461 members in national and provincial assemblies who did not pay income taxes in 2015. This figure includes ministers and other prominent political leaders. Federal Board of Revenue found that many of the 550 lawmakers (54%) falsely claimed they paid taxes.

Whatever little accountability that exists is now being eroded by Elections Act 2017.

The nomination forms of candidates for national and provincial assemblies in Pakistan have been redesigned this year to remove all questions on assets, income taxes paid or owed, bank loan defaults, foreign residency (iqama) and  educational qualifications.  This was done based on Pakistan Elections Act 2017 that became law on October 2, 2017 in the wake of several disqualifications from holding office or being a legislator.

Many legislators from across the political spectrum have  been caught lying on their nomination forms filed in prior elections. Some have been disqualified for false financial declarations while others have been removed for lying about their foreign residency visas (iqama), dual nationality or education.

Tax evasion in Pakistan exacerbates budget deficits and forces the government to borrow heavily. It also impacts critical spending on education, health and infrastructure. The result is slow economic growth and persistence of poor socioeconomic indicators.

Pakistan's tax revenue loss of $10.4 billion is ranked among the world's top 10 countries losing tax revenue. Losses of 3.5% of GDP in taxes put Pakistan at number 1 among these countries. Legislators, including government ministers, are among the most prominent tax evaders in the country. Elections Act 2017 limiting financial transparency makes it more difficult to hold the politicians accountable for tax evasion and other financial malfeasance. These developments don't augur well for development or democracy in the country.

Raymond Baker on Corruption in Pakistan

US Investigating Microsoft Bribery in Pakistan

Politics of Patronage in Pakistan

Why is PIA Losing Money Amid Pakistan Aviation Boom?

Charged from Distributor of goods not small merchants, distributors who sell wholesale goods. Distributor has to collect this extra 30% sales tax and deposit it National Bank Account for Federal Government

Transport People (Taxi / Bus / Rickshaw / Truck) (Income tax Abolished)
Just have to maintain a monthly permit government sets the price you maintain it to drive taxi on road, you can pay the small sum any bank with your NADRA card


What you refer to are indirect taxes which unfairly burden the poor. It's a regressive tax system that favors the rich.

Of #Pakistan’s top 50 #taxpayers, 33 are from #Karachi. Only six from #Lahore, three from #Gujranwala and two from #Islamabad are among the top 50 taxpayers. http://www.samaa.tv/news/2019/02/of-pakistans-top-50-taxpayers-33-are-from-karachi/

Pakistan goes after hidden assets and finds nearly $450 million
After another IMF loan, the country is increasing enforcement on tax avoidance to help manage its debt.

Pakistan's government, struggling to lift revenues and cut ballooning public debt, registered around 100,000 new tax filers and expects to have raised about $450m from a tax amnesty on hidden assets, the finance chief said on Thursday.

The announcement came a day after the International Monetary Fund gave final approval to a six-billion-dollar loan package designed to shore up the economy while the government cuts debt and builds up dwindling foreign currency reserves.

That was a significant total in a nation in which less than one percent of the 208 million population file tax returns.

Pakistan’s government, struggling to lift revenues and cut ballooning public debt, registered around 100,000 new tax filers and expects to have raised about $450 million from a tax amnesty on hidden assets, the finance chief said on Thursday.

The announcement came a day after the International Monetary Fund gave final approval to a $6 billion loan package designed to shore up the economy while the government cuts debt and builds up dwindling foreign currency reserves.

That was a significant total in a nation where less than 1% of the 208 million population file tax returns.

In total, around 3 trillion rupees ($19.25 billion) of assets were declared and tax revenue worth around 70 billion rupees ($449.15 million) was collected.


The move represented a turnaround for Khan who had accused previous governments of using amnesties to legitimise illegally acquired wealth hidden inside Pakistan and abroad.

Under the IMF agreement, approved on Wednesday, Pakistan has undertaken to drastically increase revenue mobilization by 4-5% of GDP at federal and provincial level over three years.

There have already been protests by opposition parties at the squeeze on household revenues.


Hafeez Shaikh said the IMF agreement would open up more funds from other lending agencies and help the broader economy.

“Pakistan’s economy will stabilize, and we will take on the path of progress,” he said.

Documenting a Country’s Real Estate Economy. 30-40% of #Pakistan's #economy is estimated to be undocumented. Pakistan has often been accused of not doing enough to curb #terror-financing from within its borders. #property #gold #PrizeBonds #Tax #FBR #FATF https://foreignpolicyi.org/documenting-a-countrys-real-estate-economy/

For too long, Pakistan’s economy has remained largely undocumented and informal. This has caused a lot of trepidation both within the country and internationally. Locally, everyone knows that the country’s real estate sector has been used to park a significant amount of black money as well as launder money.

When we say ‘black money’, we do not necessarily refer to the money earned from illegal sources but (as far as real estate is concerned) also that which has not been documented thanks to loopholes in the registering mechanism – caused, of course, by the negligence of the authorities. The people themselves are certainly to blame, too; it suited them to pay much lower taxes than they would have had to after registering their properties at their proper prices. Also, there was nothing actually stopping them from recording their properties at their actual market values.

Internationally, Pakistan has often been accused of not doing enough to curb terror-financing from within its borders. Regardless of the government’s willingness to effect some change in the prevalent situation – one overarching issue is that the economy isn’t documented enough to effectively restrain finances from being funneled towards any organization with potential terror links. Again the significant importance of taking account of the undocumented black money and the funds parked in real estate sector becomes evident.

All of this has eventually led the government to finally take action on the matter before the current decade sees its closure.

In general, for the economy overall, the issues caused by the undocumented economy can be understood this way:

The informal economy encompasses the entire economy, as well as that particular sector which is resistant to its advances. Any reforms introduced can be easily bypassed by its instigations, and when 30-40% of the economy is estimated to be undocumented (as is the case in Pakistan), this means that, at the end of the day, the reforms will not really take root.
As mentioned above, the informal economy can serve well to hide illicit and downright criminal activities; even more so when the sector is as large as Pakistani real estate, which, according to some estimates, has a volume running in billions of totally unaccounted-for-dollars.
Locally, an oft-discussed issue regarding the undocumented economy in general and real estate, in particular, goes along these lines: the authorities have been unable to tax the sector effectively because of its non-rationalized nature.
The unregulated nature of the sector has also meant that it is highly uncompetitive and random. The prices have been raised on the basis of mere speculation; hence the preponderance of the frequent ‘bubbles’ that deflate the prices significantly ‘all of a sudden’ after every few years.
Two issues attendant to and stemming from the ones mentioned above lead to the market not contributing anything, relatively speaking, to the national economy – when analyzed for its actual size and volume.
And, despite such a large amount of investment being poured into the sector, it doesn’t contribute as much to construction (developmental) activity. Most of the money is allocated towards buying and selling land, which, at the end of the day, serves no purpose at all. It is not, then, surprising that Pakistan has a housing shortfall running into millions of rupees.

The income tax collection from return filers in Karachi remained the highest during Tax Year 2018, followed by Islamabad, Lahore, Faisalabad and Rawalpindi. The Federal Board of Revenue (FBR) has conducted a city-wise tax analysis of the Tax Directory 2018 having data of income tax return filers, and tax deposited in each city for the year ended June 30th, 2018.

The FBR has shared tax details of all major cities, small cities and areas adjacent to border areas of Pakistan including tribal areas.

The income tax collection from return filers in Rawalpindi amounted to Rs35,170,187,615 for the tax year 2018. Malir contributed Rs29,374,153,827 as tax from the income tax return filers falling within the jurisdiction of that area.

Total income tax collection from the return filers of Hyderabad amounted to Rs4,065,622,573.