"Ulat Dunya Kee Sair", my friend Ali Hasan Cemendtaur's latest travelogue written in Urdu, was launched on January 15, 2017 at an event organized by Urdu Academy of North America, a Silicon Valley-based group dedicated to the preservation and promotion of Urdu language in the United States and Canada. The travelogue tells the story the author's travels to the world Down Under (appropriately translated by the author in Urdu as "Ulat Dunya), specifically three southern hemisphere nations of Australia, New Zealand and Fiji. It is available on Amazon.com.

The event was chaired by Khwaja Ashraf sahab, a published Urdu writer in his own right, and attended by many local Urdu lovers hailing originally from South Asia. It was emceed by Arshad Rashid sahab who, along with Tashee Zaheer sahab, runs Urdu Academy.  Other presenters included Kausar Syed sahiba, Mariam Turab sahiba and Riaz Haq.   The program concluded with Ali Hasan Cemendtaur's hilarious and self-deprecating roast of his own writing that he called "Apni Gheebat".  Please follow the embedded links or search Youtube for the individual names to find and watch the presentations.

In his presentation, Riaz Haq said "the history is often referred to as "His Story", a description acknowledging the fact that the history writer's worldview influences his or her work. This reality applies to travelogues as well".

We are used to reading world travel accounts written by western travelers; Ali Hasan Cemendtaur's travelogues, written in English or Urdu, are rare exceptions as they get the reader to see the world through the eyes of a Pakistani traveler.

Ali's Pakistani-ness drove his curiosity to visit Multan Karavansarai in Baku, Azerbaijan., where he discovered old trade ties between the Pakistani city of Multan and the Central Asia region dating back to the 15th century. 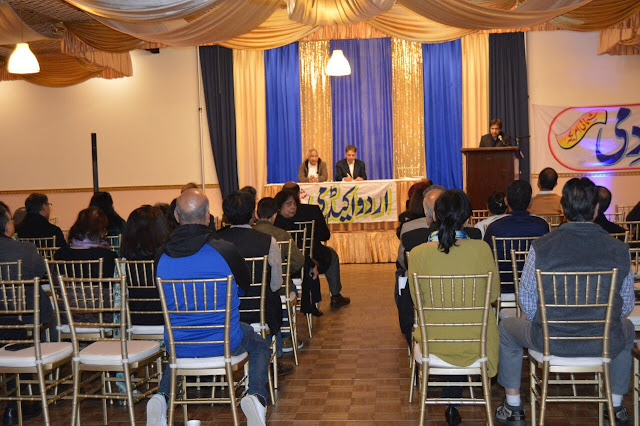 Cemendtaur's Pakistani origin compelled his interest in The Caucasus (Koh Qaaf), the mountainous region 1,000 by 600 kms in size that lies between the Black Sea and the Caspian Sea, where Azerbaijan is located. Koh Qaaf (Caucasus mountain) is associated with many fairytales that Pakistani children have grown up with. Dastaan e Amir Hamza is an Urdu collection of fairytales from Koh Qaf that continues to fascinate Pakistanis to this day. The Caucasian label, the US official race classification for American whites, traces the origin of all white Europeans to the Caucasus region. Harvard genetic studies have confirmed that the ancestors of many Ancestral North Indians and Pakistanis came from this region.

In "Ulat Dunya Kee Sair", Cemendtaur's interest in South Asian language shows through in his impressions of the spoken in Fiji by people of South Asian origin who speak a variant of Hindi but switch to "Bollywood Hindi" when conversing with Urdu or Hindi speaking visitors. 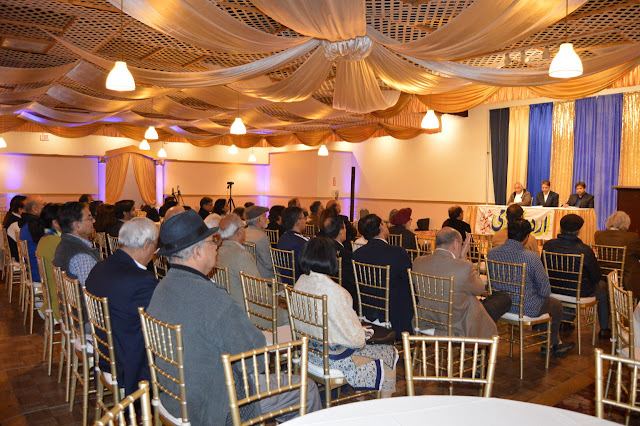 Cemendtaur writes about dealing with what he thought was "gutter smell" in Rotorua, New Zealand, and expresses his shock that a developed nation like New Zealand could have the kind of stink more common in developing nations of South Asia n areas with open sewers.  He soon finds out that it was the smell of hydrogen sulfide emanating from sulfur-laden water from hot springs in the area.

The author also notices that, unlike Australia where most immigrants are Chinese, the immigrants from South Asia are more visible in New Zealand.  Apparently, there are many Punjabi farmers in dairy business who have been living there since the days of the British Raj.

Cemendtaur finds a Hazara town in Sydney with many Hazara Shias from Pakistan who have fled sectarian conflict to find safety in Australia.  Upon research, he finds that human smugglers provide this service for a substantial fee by flying Hazaras to Sri Lanka,  then arranging visas to Indonesia from where they are put on boats to Australia.

Riaz Haq concluded his presentation by recommending "Ulat Dunya Kee Sair" as a well-written Urdu travelogue "filled with entertaining anecdotes and insightful observations about many exotic places and interesting cultures. It is written in an easy to read and highly engaging style that will keep you absorbed and make you finish it in one sitting once you start reading it."

The event concluded with a very self-deprecating and humorous monologue by Ali Hasan Cemendtaur that reminded the audience of Zia Mohyeddin's reading of Mushtaq Yusufi's work.

Here are a couple of video clips of the event:

It's available on Amazon.com at https://www.amazon.com/Ulat-Dunya-Ke...f=sr_1_fkmr0_1

Google today is expanding its speech recognition capabilities to support dozens of new languages, particularly those in emerging markets in India and Africa, the company announced this morning. That means more people around the world will gain the ability to search the web by voice as well as type via voice using Google’s keyboard app, Gboard.

The company says with the update, it’s adding 30 languages and locales around the world, bringing the total supported to 119. The update includes 8 more Indian languages, as well as Swahili and Amharic, two of Africa’s largest languages.

The new speech recognition will be initially supported in Gboard for Android and Voice Search. U.S. English speakers, meanwhile, can now use voice dictation to express themselves using emojis, too. (e.g. you can just say “winky face emoji” instead of hunting for it.)

The new languages are also available today in the Cloud Speech API, which already supported 89 languages, and is used in a number of third-party voice and video applications, like transcription services, speech analytics applications, IVR applications, and more.

In time, the new languages will be added to other Google products, including the Google Translate app.

However, the more critical part of this news is what this means for those in emerging markets – regions that are often ignored when it comes to being among the first to gain access to new technology advances from tech giants.

But with mobile, that’s changed. Tech companies are now aiming to establish footholds in these regions, as the next large swath of internet users come online.

In India, especially, Google’s move to expand speech recognition tech could have a significant impact. The country is estimated to have some 420 million mobile internet users as of this June, making India one of the biggest markets in the world for companies like Apple, Google and Facebook to address.

Google’s expansion with voice technology also comes shortly after a piece in The Wall Street Journal detailed how tech companies are rethinking their products for the developing world – in particular, how the next billion mobile users will heavily take advantage of technologies like video and voice. Google, for example, told The WSJ, that it’s been seeing “a new kind of internet user” – a group that’s “very different from the first billion” in terms of how they access the web.

The company says that it works with native speakers to collect speech samples by asking them to read common phrases. This, in turn, helped to train Google’s machine learning models to better understand the sounds and words of the new languages to improve their accuracy when they were exposed to more examples over time.

The full list of new languages includes the following:

A look into how I overcame social confines and experienced adventures one can only imagine in a lifetime.
ANAM HAKEEM

Fast forward to 2012, I was living with my parents, working at an ad agency as a copywriter, and my MBA was to be completed in a month. I had never travelled outside Pakistan.

My life changed when I found out that a group of students from a course on international retail, along with some teachers, were going to Dubai. I was not taking that course, but a few of my friends and I had previously studied the course with the same teachers. My friends insisted that we go and that it would be fun.

Fun? I thought to myself, once again, this would be me asking dad for permission and him saying ‘no’. I would end up sad and angry. I could sense that this idea would not turn out to be fun for me.

But then I imagined what it would be like to be in Dubai for five days with zero parental supervision, no need for permissions, and no curfew times. And I’d be getting to wear jeans. It seemed like a dream that could actually come true!

Using what I’d learnt from the advertising world, I packaged it to be a very serious, important, safe, and strictly supervised trip and mustered the courage to ask dad.

He realised that on this occasion he shouldn’t say no because the tour was related to coursework. Also, because the faculty members would be accompanying us and one of my close friends whom my parents knew well, also got permission to go. Hence, he said yes.

I could not believe it. I wrote the biggest lesson of my life down in my diary. Never be afraid to ask, no matter what you think the odds are.


I was not earning enough at the time and was paying for my MBA, as well as all personal expenses. And so, I planned this Dubai trip on a very, very tight budget.

I ate falafels and Burger King only, so I could save money to visit Formula Rossa (Ferrari World) and the top of Burj Khalifa.

I grew more rebellious and one year later, after major arguments with my parents, I left home to be on my own. I had built quite a sizable amount of savings during the past two years, thinking I would use it one day to finally break free and travel.

I was turning 27 that year and found out from a friend that on my birthday, the world’s biggest electronic music festival, Tomorrowland, was taking place in Atlanta, Georgia.

I decided to take a chance and applied for a US visa.

At the embassy, I was questioned thoroughly about my reason to visit the US. I told them I wanted to treat myself to a Tomorrowland ticket for my birthday.

They then asked me at length about the festival, the DJs attending, and also expressed amazement at the fact that Pakistanis even know about electronic music. It was a most amusing exchange for both parties.

They asked me in detail about the nature of my job, to which I confidently responded by describing what I do and how much I enjoy doing it.

I don’t know if it was my lucky day, or if they liked how neatly I had presented my documents but I somehow managed to secure approval for the visa.

The lady who had interviewed me told me they had seen many apply for a visa there, but never a girl who wanted it to travel to a music festival.

She was fascinated. I was ecstatic. Getting a US visa, with barely any travel history was indeed an unexpected victory.

The trip to the US in 2014 was a three-week-long adventure with friends, during which I travelled from California to Vegas to Texas to Atlanta and ended it all in New York.