History is often referred to as "His Story", a description acknowledging the fact that the history writer's worldview influences his or her work. This reality applies to travelogues as well. 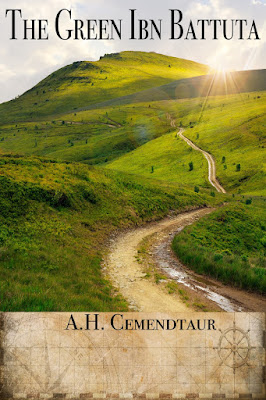 We are used to reading world travel accounts written by western travelers; Ali Hasan Cemendtaur's Ibn Battuta is a rare exception as it sees the world through the eyes of a Pakistani. The title is a tribute to Ibn Battuta, the 14th century Muslim traveler from North Africa who wrote extensively about his travels of much of the known world at the time. Ali's Ibn Battuta covers his travels starting in 1990s.

Ali's Pakistani-ness drove his curiosity to visit Multan Karavansarai in Baku, Azerbaijan., where he discovered old trade ties between the Pakistani city of Multan and the Central Asia region dating back to the 15th century. His Pakistani origin compelled his interest in The Caucasus (Koh Qaaf), the mountainous region 1,000 by 600 kms in size that lies between the Black Sea and the Caspian Sea, where Azerbaijan is located. Koh Qaaf  (Caucasus mountain) is associated with many fairytales that Pakistani children have grown up with. Dastaan e Amir Hamza is an Urdu collection of fairytales from Koh Qaf that continues to fascinate Pakistanis to this day.  The Caucasian label, the US official race classification for American whites, traces the origin of all white Europeans to the Caucasus region.   Harvard genetic studies have confirmed that the ancestors of many Ancestral North Indians and Pakistanis came from this region.

Ali's Muslim identity took him to the Al-Aqsa mosque and the Dome of the Rock, Islam's 3rd holiest place, in Jerusalem now controlled by Israel. It was a Friday when Ali went to the AlAqsa, a day when only Muslims are permitted to enter it.  He was stopped at the entrance to the mosque by armed soldiers who tested him to ensure that he is Muslim. It's an experience I can relate to. I, too, was subjected to similar tests at two different mosques prior to entering for the Friday prayers: At Al-Aqsa in Old Jerusalem and Ibrahimi mosque in Hebron on the Israeli-occupied West Bank in Palestine.

I have known my footloose friend Ali, fellow Silicon Valley NEDian,  disappear for weeks, sometimes months at a time, only to reappear via email or social media posts from some remote exotic locations in different parts of the world. And he doesn't travel alone; he has his wife Hina and twin babies in tow. In fact, he's been doing it since the days when his daughter and son were still infants in diapers.

The list of the locations he's written about is long with countries located on every continent and every corner of the world. And he has done most of it using his green passport issued by the government of his native Pakistan.

Along the way, Ali  ended up in brief Interpol detention in Colombia, robbed in Swaziland and stranded at Romania-Hungary border.

When Ali's Avianca flight to Caracas, Venezuela, was delayed till the following day, his loud protests at Bogota Airport in Columbia helped him get out of the Interpol jail and he was put in the VIP lounge at the airport. Here's an excerpt from The Green Ibn Battuta:

"The Interpol man started talking to people on the phone. He finally put down the phone. "No, we can not let you go to the hotel, but we will put you in the VIP lounge. I'm sure you'd like it there,"we were told. Shortly, a security man came and took us to the VIP lounge. The VIP salon at Bogota airport had drinks and munchies, and reclining seats. We were still in the Interpol surveillance but the VIP lounge was a better jail than the one left behind just minutes ago. "

Ali has travelled through varied terrains ranging from dry deserts to thick rain forests. He has visited the hermit kingdom of North Korea, the conflict-ridden Israel, and the hitherto pariah state of Cuba, at least for the Americans. His travels have taken him to the failed state of Haiti, post-Apartheid South Africa  and the highly industrialized rich nations of Western  Europe. He has ventured into the countries that used to be behind the Iron Curtain in the Cold War era, and seen the developing nations of Asia, Africa and Latin America and the Middle East.

In South Africa while traveling on a bus from Cape Town to Johannesburg, a woman fellow traveler sought to proselytize Ali.  "Have you accepted Jesus Christ as your savior?" she asked.  When Ali said "no", the woman gave him a long sermon that lasted the entire bus ride. Here's an excerpt from the book:

My "no" cost me heavily. I had to listen to Cynthia for a very long time. Later, she asked me,

"On whose recommendation have you come to South Africa?" putting emphasis on each word.

I had a strong temptation to say "Jesus Christ's" but then I had a second thought. She would not appreciate the joke. I mumbled something to the effect that I was a student and I was in South Africa to learn through observation. When I spoke out my critique of the South African society, she let her guard down.

"Before, we could not travel like this," she told me.

I wasn't sure if by "we" she meant all of the South Africans of color, or she meant she and I.

People would travel secretly in much poorer condition. But when you know that Lord loves you, you can put up with all that," she said. No wonder Marx called religion the opium of the masses.

The Green Ibn Battuta is filled with entertaining anecdotes and insightful observations about many exotic places and interesting cultures. It is written in an easy to read and highly engaging style that will keep you absorbed and make you finish it in one sitting once you start reading it. I highly recommend it.

Lovely write-up. I will certainly buy this book if it is available in India.

I have a humble suggestion, sir. You have made a pile and your children have grown up to become well adjusted adults, mashallah! and your family dont need your attention that much. It is time you packed up your bags, sir and travelled around the world and brought your insights to us. With your wordsmithery and attention to details it will certainly be a great read! Looking forward to your travellogue, sir!