In a new book titled "RAW: A History of India’s Covert Operations", Indian investigative journalist Yatish Yadav has essentially confirmed some of what India's neighbors have suspected for a long time. Yadav has added to the revelations contained in a earlier book titled "Mission R&AW" written by ex Indian spy RK Yadav. 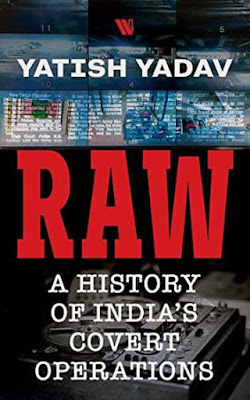 Yatish Yadav has revealed that Indian intelligence recruited three top Afghan leaders, including Northern Alliance leader Ahmad Shah Masood, in 1990s. Two other leaders, not named by Yadav, are still active in Afghan politics. The Americans knew about RAW's activities in Afghanistan.  Although it is not clearly stated in the book, it appears that Indian intelligence continues to have its assets at the highest levels of the government in Kabul. One of India's Afghan assets that is still active but not been named is most likely Abdullah Abdullah, Afghanistan's current "Chief Executive". Abdullah has close ties with New Delhi. Members of his immediate family live in India.

Here's an excerpt of the book about Afghanistan:

"R&AW also created immense goodwill in many countries; it helped a top Afghan politician and former warlord to escape the Taliban and even got his relative a job in Turkey. R&AW spooks relentlessly bribed, cajoled and blackmailed India’s enemies".

Yatish Yadav confirms what is already well known: India had carved Bangladesh out of East Pakistan.  Indian intelligence continued its covert actions in Bangladesh after its creation. Here's an excerpt of the book, as published in the Indian media:

"Set in the turbulent ’70s to the ’90s, R&AW spooks toppled dictators like General Ershad in Bangladesh and Fiji’s Colonel Rabuka by organising public protests and trading loyalties of people in their inner circles respectively.

Although the book makes no reference to it, Indian agent Kulbhushan Jhadav's arrest in Balochistan has confirmed that  RAW agents, based in Afghanistan and Iran, are actively carrying out violent covert ops in Pakistan.

There are 4,000 Indians working in Chabahar, Iran, according to Indian journalist Karan Thapar. Some of them, like Kulbhushan Jadhav, work undercover for Indian intelligence agency RAW.  It is hard to believe that the Iranian intelligence is not aware of the presence of undercover Indian agents among the 4,000 Indians working in Chabahar. After all, Jadhav had two passports, one in his own name and another in the name of Hussein Mubarak Patel. The Indian Express and Asian Age, both Indian publications, suggest that Jadhav had links with Uzair Baloch who has been convicted by for working for the Iranian intelligence in Pakistan.  Kulbhushan Jadhav has confessed to orchestrating deadly terror attacks in Balochistan and Karachi. He has said that India's RAW funneled money through Indian consulates in Jalalabad, Kandhar (Afghanistan) and  Zahidan (Iran) to BLA and TTP for terror attacks in Balochistan and Karachi. Targets of terror attacks included people, mosques, roads, port and Balochistan's Hazara Shia community.

The book claims that RAW fueled the conflict in Sri Lanka by playing both sides. Here's an excerpt:

"In Sri Lanka, R&AW played a double game, helping the Sri Lankan Army to destroy the LTTE while protecting Indian assets against the Tigers and President Gotabaya Rajapaksa’s hit men. According to a R&AW spymaster in Colombo, MEA bungled and allowed the Chinese to get a foothold in the island. Avinash Sinha arrived at Colombo Fort Café on the morning of 3 December 2005, looking forward to what he had been told was the best Sri Lankan breakfast in the city. Avinash, a R&AW operative, perhaps a few autumns younger than Kosala Ratnayake, had returned to Colombo that October after three years. He had recruited Kosala, a top functionary in the Sri Lankan government, over several wet evenings in January 2002. That was when the Sri Lankan regime had been seriously engaging with the Liberation Tigers of Tamil Eelam (LTTE) for peace talks".

Has Modi Stepped Up India's Cover War Against Pakistan?

CFR's View of the Taliban

Rise and Fall of Islamic Civilization

The Prophet I Know

What #China's meeting with #Afghanistan, #Nepal and #Pakistan means for #India's regional isolation? Wang proposed that the attending countries also support the extension of the #CPEC to Afghanistan, and create a regional network of connectivity. https://www.huffingtonpost.in/entry/china-afghanistan-nepal-pakistan-india_in_5f215ddcc5b6b8cd63b03c39?ncid=other_twitter_cooo9wqtham&utm_campaign=share_twitter

The conference comes a month after Indian and Chinese troops clashed in Galwan, resulting in the death of 20 Indian soldiers and an unknown number of Chinese casualties. Both the countries have been involved in disengagement talks, but bilateral relations have worsened in recent days.

Wang, according to a statement from the Chinese foreign ministry, said that the countries should consolidate the consensus on solidarity against Covid-19 and reject politicisation of coronavirus. He also said that the four countries should continue to promote the joint construction of the Belt and Road Initiative, explore ways to synergise the China-Pakistan Economic Corridor (CPEC) and the Trans-Himalayan Multi-Dimensional Connectivity Network.

Wang proposed that the attending countries also support the extension of the CPEC to Afghanistan, and create a regional network of connectivity.

Experts told HuffPost India that the meeting was a clear signal that China wants to encircle India.

Some people say that Indian agents were behind assassination of former PM Benazir Bhutto .

Can you pls throw some light on this ?

Ahmad: "Some people say that Indian agents were behind assassination of former PM Benazir Bhutto"


Both the CIA and Scotland Yard believe Benazir Bhutto's assassination was ordered by the Tehrik-e-Taliban Pakistan (TTP) leader Hakimullah Mehsud.

Subsequent reports indicate that TTP had close links with Indian intelligence agency RAW. Indian analyst Bharat Karnad has also echoed this suspicion and advocated the use of TTP to attack Pakistan.

RAW work for years to annex Sikkim and in 1975 finally make the move. Sikkim was a small independent Himalayan Buddhist kingdom that has existed for hundred of years neighboring China (There is no such thing as India at that time). In the 18th century the small kingdom was briefly overran by the Nepalese and the Sikkim Chogyal (monarch) ask China for help. The then Qianlong emperor sent an expedition army into Sikkim and repelled the Nepalese and restored Sikkim independence. The small kingdom was left unmolested until it was annexed by India in 1975.