Only 18% of Pakistanis and 19% of Indians under the age of 24 have the skills required for 21st century jobs, according to a United Nations and Business Coalition for Education study. It's the percentage of all school age children on track to complete secondary AND reach the learning benchmarks spelled out  by National Achievement Test (NAT) 2016 for Pakistan  and NCERT 2017 for India.

South Asian economies have experienced some of the fastest growth rates in the world. They are driven by young and growing populations in the region. Sustaining growth will become increasingly difficult unless significant investments are made to prepare South Asian youth for 21st century jobs.

Today, South Asia is home to the largest number of young people of any global region, with almost half of its population of 1.9 billion below the age of 24, according to data produced by the Global Business Coalition for Education (GBC-Education), the Education Commission, and UNICEF.

Youth unemployment remains high (at 9.8% in 2018) because of changing labor market demands and over — or under — qualification of job candidates, according to the report. 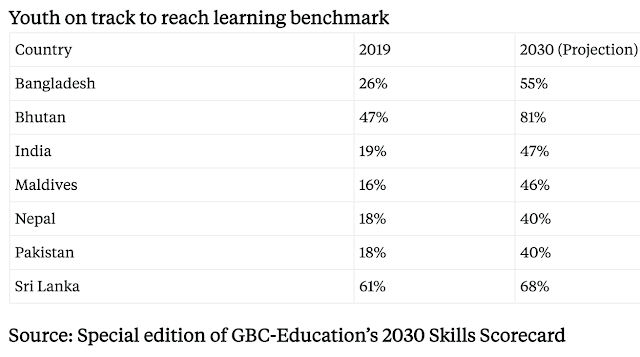 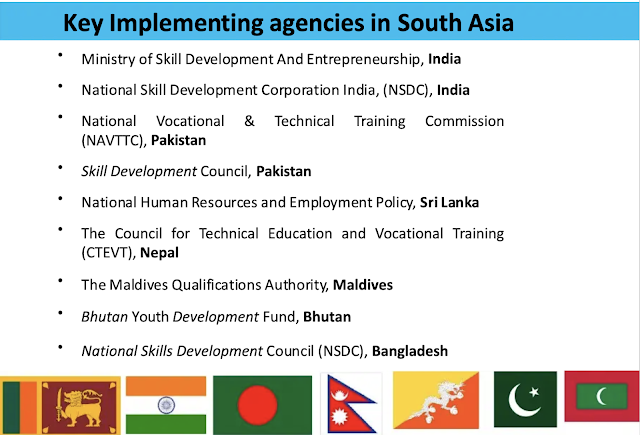 Current efforts underway to fill the skills gap in the biggest South Asian economies of India, Pakistan and Bangladesh are grossly insufficient. Only 47% of Indian, 40% of Pakistani and 55% of Bangladeshi youths will have the skills required by 2030.

These estimates were generated based on a 2019 update of the Education Commission’s original 2016 projections model for the Learning Generation report. Most recent national learning assessment data used for each country as follows: BCSE 2015 for Bhutan, GCE O Levels 2016 for Sri Lanka, LASI 2015 for Bangladesh, NAT 2016 for Pakistan, NCERT 2017 for India, Nepali country assessment 2017 for Nepal, O Level Exam 2016 for Maldives. Afghanistan is not included due to lack of recent learning assessment data at the secondary level.

Expectations of huge demographic dividends in South Asia will not be met unless policy makers significantly increase focus and investments to rapidly up-skill their youthful populations.

10 Pakistan Universities Among Top 300 in Asia

Biotech and Genomics in Pakistan

But would the jobs exist anyway? Isn’t that the crisis for the age?

Saad: "But would the jobs exist anyway? Isn’t that the crisis for the age?"

Sir, which skills are considered here, other than software

Nauman: "Sir, which skills are considered here, other than software"

Industrialization of #Pakistan will require a wide range of skills to design, build, operate, program, maintain and repair all kinds of machinery, software and hardware .

It's percentage of school age children on track to complete secondary AND reach the learning benchmarks.

Sir I don't understand one thing when will the govt of PAKISTAN look into issues of govt schools ,colleges and universities of Pakistan?

In MCS program which is offered in UBIT department of Karachi University ,they are teaching advance level courses to their students who don't have computer science background.

Also their is no option of semester freez and course exemption in UBIT(Computer Science Dept) of Karachi University .

Investor Jayant Bhandari: #Indians in the West are India's best. Those left in #India are unskilled. People who think India can ever compete with #China or even continue to grow without West's help do not understand ground realities. #MakeInIndia #Modi http://jayantbhandari.com/jay-taylor-india-china-hk-ff/

If I need to get plumbing work done in India, I do the job myself, despite that the cost of a plumber is a mere couple of dollars. In Canada, where a similar work might cost fifty times more, I might get someone to do the job. Why? Because the plumber in India will do a horrible job and will create five new problems. I started and ran Indian subsidiaries of two European companies. The so-called cost advantages of India always stayed an illusion. Anyone who thinks that India can ever compete with China or even continue to grow without constant technological help from the West has no understanding of the ground realities in India. Here is a conversation I recently had with Jay Taylor:


Indian government exists for the sole purpose of collecting bribes. Indian bureaucrats are lazy, incompetent, and sadistic, a case study on which I wrote here a few days back. But what one must remember is that India’s most fundamental problem is its tribal and unskilled populace.

The government is fully committed to reforming the skill sector of the country that will not only ensure a prosperous future for young people but also the country.

This was said by Minister for Federal Education & professional Training Shafqat Mehmood during a visit to the new building of National Vocational & Technical Training Commission (NAVTTC) here on Wednesday.

NAVTTC Chairman Syed Javed Hasan and Executive Director Dr. Nasir Khan briefed the minister on the 14 components of ‘Hunarmand Pakistan’ programme, a component of Prime Minister’s ‘Kamyab Jawan’ programme, under which NAVTTC is initiating a comprehensive reforms process of the country’s skill development sector to make it compatible with the requirements of the country’s huge youth population as well as domestic and international job markets.

“Hunarmand Pakistan is a unique and comprehensive program aimed at skilling our most precious national asset, youth, by creating employment opportunities for their social and economic uplift and enabling them to play pivotal role in the national development.

"It presents both challenges and opportunities for NAVTTC to bring reforms in the skill sector of the country,” he added.

The minister emphasized on a uniform certification regime that would serve as a gold standard and would be recognized both in the local and international market.

He also stressed that selection of the best TVET institutes based on merit and transparency must be ensured which is paramount to the overall success of ‘Hunarmand Pakistan’ programme.

“We are focused on imparting quality training to our youth which is the only way to guarantee maximum employability to our TVET graduates,” said chairman NAVTTC Syed Javed Hasan.

“This huge project envisages the reform agenda of TVET sector of Pakistan, and has been developed after extensive deliberations and feedback from key stakeholders from across the country incorporating all eight identified interventions as prescribed in the road map by the Task Force on Technical and Vocational Education," said Executive Director NAVTTC Dr. Nasir Khan.

The meeting was also attended by all the Regional Director Generals of NAVTTC.

The minister appreciated the efforts of NAVTTC to uplift the TVET sector of Pakistan and said the effective execution and implementation of the program will transform the skill development of the country. The minister also planted a sapling at the new premises of NAVTTC.

A multistakeholder approach takes flight
In the local context, Parwaaz means ‘’to take flight”. Standing true to the spirit of the name, with the guidance of the most influential public and private-sector leaders, Parwaaz is developing a futuristic approach to reskilling the nation.

Parwaaz is a multi-stakeholder alliance representing both the public and private sector. It focuses on three areas: lifelong learning and upskilling, future-readiness and youth employability, and innovative skills funding models.

It has identified 6 priority sectors to fuel Pakistan’s future growth: ICT, Financial Services, Textile, Hospitality, Retail and Services, Manufacturing and Light Engineering and Agriculture and Livestock. 42 of the largest employers in Pakistan are working together with the Punjab Skills Development Fund through Parwaaz to establish 6 sector-level incubators to identify reskilling, upskilling and new-skilling roles that are emerging today or that will appear in the future.

Parwaaz business leaders are providing support to the platform in form of funding (full/partial), training facilities, guidance and support in designing course curriculum, providing instructors or any other form of support. Working closely with experts appointed by each of these businesses from within their own companies, the training courses for each role under each industry incubator are being standardized to meet market needs. This will not only be a proof of concept but allow the model to be scaled up quickly and attract a larger pool of employers in each of the 6 sectors across Pakistan.

Real people, real skills, real impact
Parwaaz is already making a difference to people’s lives and futures. Three different skills, pilot incubators have been established and the work underway will ultimately result in approximately 1,000 young people graduating by June 2021 with improved and market relevant skills for the labour markets of tomorrow. These pilot programmes are owned and supported by the companies taking part in Parwaaz and are focusing on the following sectors and skills:

Bridging the gap
The Accelerator is raising awareness and urgency not only among the employers and private sector at large but also the young people around the importance of skilling and reskilling and nurturing a proactive mindset despite of the challenging times. At the peak of the COVID-19 crisis, the Co-Chairs of Parwaaz participated in a number of open virtual activities to provide guidance to young Pakistanis and share their advice on how to navigate this time and prepare for the bounce back of the economy.

Ultimately, the Accelerator is bridging a crucial disconnect. With the Government working closely with the private sector, an opportunity for public-private partnership in the skills sphere has been ignited, which didn’t exist before, and can result in new, forward-looking policies and strategies, and a brighter future for Pakistan’s young and growing workforce.