Pakistani author-journalist Raza Ahmad Rumi recently visited San Francisco Bay Area as part of his book tour to promote his latest book "Being Pakistani: Society, Culture and The Arts". Raza had three speaking engagements in the Bay Area: (1) At the World Affairs Council in San Francisco on Wednesday November 14, 2018, (2) Institute of South Asia Studies at University of California at Berkeley on Thursday November 15, 2018, and (3) Pakistani-American Community Center in Silicon Valley, CA on Friday November 16, 2018. 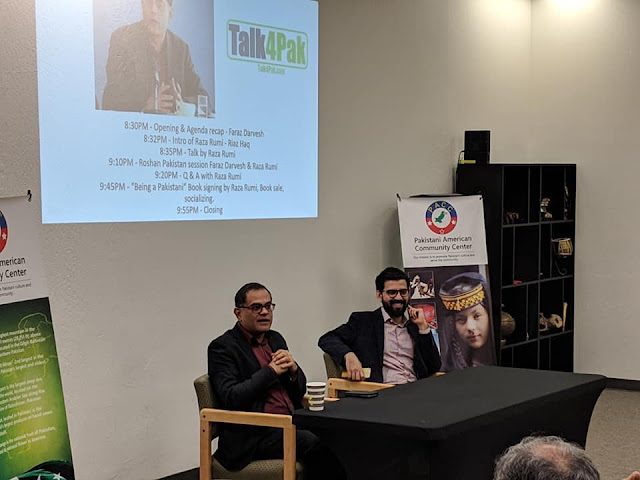 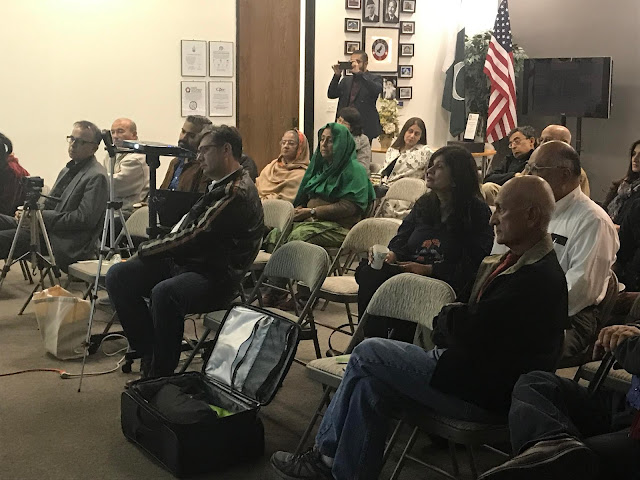 Raza was introduced by Riaz Haq at the PACC. Raza is a alumnus of London School of Economics. He has passed Pakistan Civil Service exam and served in senior positions in Pakistan government. He has also worked as a consultant at the Manila-based Asian Development Bank (ADB). He is currently  the editor of Lahore-based Daily Times. He lives in Ithaca, New York and teaches at Cornell University. His books include Delhi by Heart: Impressions of a Pakistani Traveller, The Fractious Path: Pakistan’s Democratic Transition and Identity and Faith and Conflict. His most recent collection of essays Being Pakistani: Society, Culture and The Arts was published in 2018 by Harper Collins. 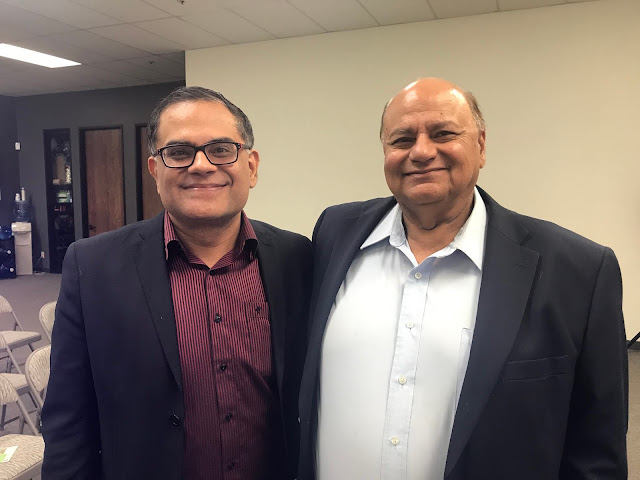 In his presentation at the PACC, Raza Rumi challenged the prevailing one-dimensional narrative of Pakistan that wrongly focuses on extremism and terrorism. He acknowledged that Pakistan does have a serious problem of extremism and terrorism. But these problems also exist elsewhere, including in America where we have seen the rise of white supremacists' violence in recent years. He said part of his motivation in writing Being Pakistani is to highlight Pakistan's other dimensions including, for example, its ancient civilization that is thousands of years old as well its long Sufi traditions of tolerance and inclusiveness.

He mentioned the great ancient cities of Mehrgarh in Balochistan, Moenjodaro in Sindh and Harappa in Punjab. Raza emphasized in the areas that now make up Pakistan as a great center of learning with Taxila University, believed to be the world's first university, located close to the twin cities of Rawalpindi-Islamabad. He also mentioned Gandhara Civilization where Buddhism flourished in what is now Khyber PakhtunKhwa (KPK) province of Pakistan. Rumi sees Pakistanis as inheritors of these great civilizations. 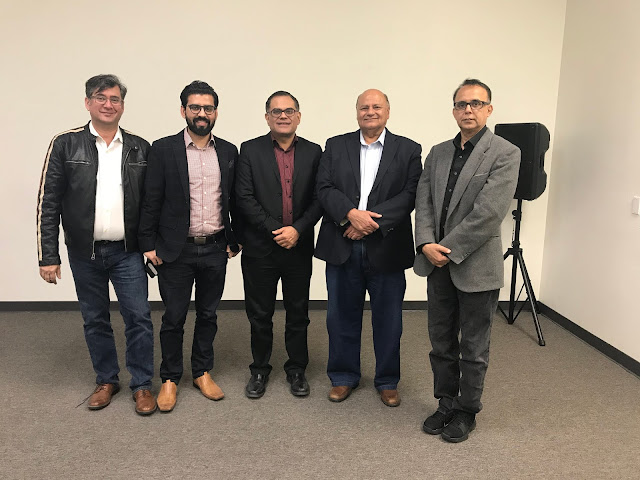 Rumi talked of the poetry of Bulleh Shah and the work of miniaturist artist Shazia Sikander whose art is displayed at top museums across America and the wildly popular Coke Studio that offers a beautiful fusion of the traditional and the modern poetry and music. Raza said that it was "ironically" during General Musharraf's regime that the deregulation of media, telecom revolution and proliferation of news and entertainment channels allowed Pakistani arts and culture to flourish.

Rumi said that there are threats to mass media and free expression but there is also pushback by many who wish to preserve freedom. He said that Pakistan's progress is not linear but it is definitely making progress toward a democratic middle-class nation.  There is a growing middle class in Pakistan and the country recently saw peaceful elections and power transfer for the third time in the last decade. The process is far from perfect but the overall trends are positive.

Here's a video  recording of the event:

Alam vs Hoodbhoy: Clash of Ideas in Islam

On 28 March 2014, Raza was attacked by a group of assailants reportedly members of the Taliban-affiliate Lashkar-e-Jhangvi for his anti-LeJ views. Raza survived the attack, but his driver, Mustafa, was killed. On this incident, the former director of Human Rights Watch wrote: "Miraculously, he emerged unscathed from the hail of gunfire intended for him. Raza is now in a secure location—outside Pakistan. He had no choice but to leave as the authorities felt no embarrassment in letting him know that they could not guarantee his life if he stepped outside his Lahore home.

Western #Illinois University #Music #Education Professor visited #Pakistan on #Fulbright & worked with teachers and students at the National Academy of Performing Arts (NAPA) in #Karachi and the Beaconhouse National University (BNU) in #Lahore for 2 weeks http://www.wiu.edu/news/newsrelease.php?release_id=16034

This is Cangro's second Fulbright award. He worked with teachers and students at the National Academy of Performing Arts (NAPA) in Karachi and the Beaconhouse National University (BNU) in Lahore for two weeks.

"I am very fortunate to have received this award and had the opportunity to visit Pakistan," said Cangro. "One of my goals was to break down stereotypes and misconceptions about the country. I was warmly received, and generously cared for during my visit, and made some great new friends."

Most of the students and faculty were proficient in English, so there were no issues in communication. Cangro presented on topics including music education in the US, assessing learning in the arts and his research area of cooperative learning. He also introduced and demonstrated the trumpet and had the opportunity to jam with a sitar artist and students at both colleges.

Goals for this trip included sharing information on arts education and cultural exchange; however, a new connection for WIU was at the top of the list. Both NAPA and BNU are very interested in collaborating with WIU to create a music degree program. Meetings with faculty and administrators at both institutions opened the door for future collaborative projects, as well as consultation for creating degree programs not currently available in Pakistan.

A contrast in socioeconomic conditions, Pakistan is a young country that is developing and building its identity through education. BNU and NAPA are deeply committed to their students and to building their programs to address 21st century ideals and developing global thinkers in the arts, while preserving their unique culture.

Cangro hopes this trip will be the beginning of a long-standing relationship for WIU that encourages study abroad opportunities, student and faculty exchanges and partnership degree plans.

Sky is the limit for #Pakistan's metal artist. He completed a diploma in electrical #engineering in 1986. Then he joined Nishtar Hall, #Peshawar's main #cultural centre for #music and #art, and then produced a number of oil paintings on large canvasses. https://www.bbc.com/news/world-asia-52660199

Nasim Yousufzai started digging art with a pencil, struck some oil, and ended up in scrap, so to speak.

From unlikely origins, the 50-something metal artist from Pakistan's north-western city of Peshawar has done all of this, and more.

His biggest exhibit was when he designed a huge float for the Pakistan Day parade in 1995, winning second prize.

Then in 2001, he took to the air by designing a makeshift aircraft from an old automobile engine, used car tyres, wooden propellers and wings made of steel pipes covered with canvas sheets.

He flew the machine for five minutes, before he was waved down by his brothers who dragged him home where his panicked mother ordered him never to do it again.

He has since abided by that order.

The son of a day labourer who had migrated from his native Swat region to Peshawar in search of work, Nasim's childhood was steeped in poverty.

But he appears to have made the best of it.

As a child, he did everything he could to help his family while he studied. After school he would go to a nearby wholesale market to buy vegetables, which he sold in his neighbourhood. Then he worked part time as a helper at an electric store, and also at a tailor's shop where he learned stitching.

"Since my earliest years, I somehow developed a passion for drawing," he says.

That might have sparked his talent for designing things in later life - and in recent years making art out of scrap metal.

"I couldn't resist grabbing a paper and a pen to draw anything that caught my interest, which gradually expanded from household objects to living things."

He completed a diploma in electrical engineering in 1986 and was immediately offered a job, which he still holds.

Alongside his work, he started producing political cartoons for a couple of local newspapers which not only added to his income, but also satisfied his creative urge.

When he joined evening classes at Nishtar Hall, Peshawar's main cultural centre for music and art, he learned to paint, producing a number of oil paintings on large canvasses.

In late 1994, he spotted a newspaper advertisement inviting artists to produce a float representing the culture and history of Khyber Pakhtunkhwa province (then called North-West Frontier Province, or NWFP), for use at the annual Pakistan Day parade in Islamabad.

He applied and his idea was approved for official funding.

Over the next two months, he camped in Islamabad, building a massive float using wood, thermopore sheets, plaster of paris and hundreds of jute bags.

The scene that he crafted showed a male Pathan, KP's dominant ethnic group, a British-era hilltop fort, the building of one of Peshawar's oldest graduate colleges, and Tarbela Dam, the largest in Pakistan.

The float was loaded onto a 22-wheel trailer and driven past the stage where the president and the prime minister were seated.

Having seen Naseem assembling the aircraft in the courtyard of their house, his brothers vaguely knew what he was building. But his mother, who had lived in a village all her life, didn't have the slightest idea.

She came to know when someone rang her up and told her. At that time Naseem had arrived at an air strip in a small town just north of Peshawar, and was readying his plane for the flight.

There had been talk at the time of several home-built aircraft in the region, and one of them near Peshawar had crashed, killing the pilot. So his mother was greatly alarmed.