Vehicles in Pakistan: Over Half of All Households Own Motorcycles in 2019

Pakistan is now the 5th largest motorcycle market in the world after China, India, Indonesia and Vietnam. With 7,500 new motorcycles being sold everyday, Pakistan is also the among the world's fastest growing two-wheeler markets. Passenger car and motorcycle sales in Pakistan have both been soaring at rates of over 20% a year until recently. 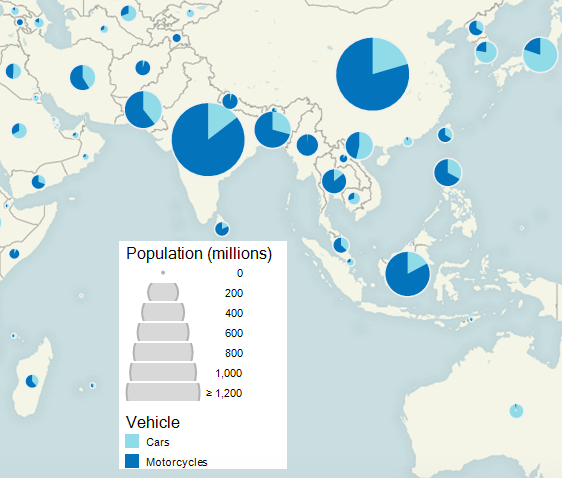 Motorcycle ownership data is yet another confirmation of the fact that the majority of the households in Pakistan now belong to the middle class, a first in Pakistan's history. This was first reported in 2015 research done by Dr. Jawaid Abdul Ghani of Karachi School of Business and Leadership (KSBL).

It's an important tipping point that puts Pakistan among the top 5 countries with fastest growing middle class population in Asia-Pacific region, according to an Asian Development Bank report titled Asia's Emerging Middle Class: Past, Present, And Future. The ADB report put Pakistan's middle class growth from 1990 to 2008 at 36.5%, much faster than India's 12.5% growth in the same period.

The State of Pakistan's Social Sector

Karachi School of Business and Leadership


China-Pakistan Economic Corridor
Posted by Riaz Haq at 10:57 AM

Pakistani consumers continued to spend in the last two years and consumption levels have trended up. The devaluation of the rupee will finally allow Pakistani exports to be competitive and bring the current account deficit down. Hopefully, the SBP is now in charge of the currency, and its new head will let it stay fairly valued and not repeat the mistake of an overvalued rupee. The exchange rate needs to constantly to higher Pakistani inflation. I hope that this next 12 months of pain yields to an export led growth path that can be sustained and that Pakistan can reach 6-7% growth on a consistent basis for the next 20 years. The government needs to end its subsidies and get rid of state owned firms. It should instead concentrate on human development, raising enrollment and completion rates for primary and tertiary schooling, and improving health and cutting infant mortality in half at least. These are all attainable goals with political will.
Another item which was supposed to have been completed last year was rebasing the GDP. It is likely undercounted by 20%, and with a correct GDP number, Pakistani per capita income (in PPP terms) is actually fairly close to India. Given the much lower income inequality in Pakistan there is much less extreme poverty in Pakistan. The fall in the exchange rate effects the market rate GDP but not the purchasing power parity number.

#Pakistan’s #economic #crises over: Central Bank Chief Reza Baqir "Uncertainty and instability was a serious challenge to the country, which is now over as the economic team tackled the situation very effectively. Pakistan's future is bright." #SBP #IMF https://www.thenews.com.pk/latest/486036-pakistans-economic-crises-over-future-is-bright-sbp-governor-dr-reza-baqir

KARACHI: Governor, State Bank of Pakistan (SBP), Dr. Reza Baqir on Monday assured that the country has come out of the economic crises as it has achieved economic stability including financial one, which has created investors' confidence that is very positive signal.

"Uncertainty and instability was a serious challenge to the country, which is now over as the economic team tackled the situation very effectively. Pakistan's future is bright," he said while speaking at his first interaction with media here at the SBP Building.

He also answered questions by journalists in Islamabad through a video link.

Dr Reza said the present government had assigned two major tasks to its economic team that is, bringing economic stability and ensuring inclusive economic growth in the country; where there is improvement in the life of the common man.

“The two main reasons for the economic instability were: external deficit and fiscal deficit. Now, these were being addressed effectively and in credible manner.”

The external/trade deficit situation was improving.

He said it was very positive development that the government had pledged not to borrow from State Bank of Pakistan.

Instead, he added, it would borrow from the money market. This would save State Bank of Pakistan from printing new notes which pushed inflation.

About the exchange rate, SBP Governor said a fixed rate or free float currency policy were not in favour of the country.

Rather, SBP had adopted the market-based policy for it.

Regarding the key interest rate, Dr. Reza said SBP's Monetary Policy Committee did take into account the projected inflation before fixing it.

"We shall be fighting inflation to our best," he reassured, adding the interest rate was the best tool to control inflation.

He said the state bank had to work for three objectives including financial stability, maintaining exchange rate and for sustained economic growth.

The SBP Governor defended the agreement being signed with IMF maintaining that it had sent positive signals to the entire world about financial stability in Pakistan that had also built confidence among the local and foreign investors.

"Going for IMF loan, everything was being done in the interest of the country," he said and that all IMF conditions were dully fulfilled.

He informed the media that on July 3, 2019 IMF Board of Directors' meeting would be held and all details would be dully published which would make the things clear about the deal with the world credit body.

The market-leader in Pakistan’s Consumer-Electronics and Home Appliances market – Dawlance has now achieved another huge milestone, by manufacturing its Ten Millionth unit. Completing its 40 years of excellence, this enterprise is a fully owned subsidiary of Arçelik A.S. – The largest Turkish enterprise and the third-largest manufacturer in Europe.

The Chief Executive Officer of Dawlance – Mr. Umar Ahsan Khan stated that: “Dawlance is the biggest Turkish investment in the economy of Pakistan. Producing its 10 millionth Unit is the strongest evidence of the brand’s reliability. It is an unforgettable moment for us as we enter this new era of consumers’ confidence. The company is thankful to its over 4000 employees, our consumers, stakeholders, distributers, and dealers all over Pakistan, along with everyone else who contributed to the success and growth of the company.”

The Head of Production at Dawlance – Mr. Ameen Ahmed expressed his delight and said; ”We have come a long way since the company’s humble beginning, back in 1980, when a small assembly plant was established in Hyderabad. Today, the company has grown tremendously, operating 3 large-scale manufacturing units in Pakistan. The 10 millionth product is a testament to our passion and commitment, to strengthen Pakistan’s industrial-base and economy.”

Through this resourceful collaboration, the most reliable brand has been established, to offer the highest quality electronics and services to Pakistani consumers. Our most innovative technologies also promise the conservation of energy. Being a socially responsible organization, it generously contributes towards credible initiatives for community-development and other healthy socio-cultural activities, to create more economic opportunities and empower its consumers.

All Dawlance Refrigerators and Freezers come with a 12 Years Compressor Warranty (including Inverter and non-inverter technology). All its new models of Washing Machines are covered by a 10 Years Motor Warranty.

With the continued focus on customer care and after-sales service, it always exceeds the customers’ expectations. With creating newer technologies, every employee is inspired to ensure compliance with global standards and best-practices at every level.

A joint-venture company in Pakistan for the integrated-production of motorcycle chains is now on the cards as two of Japan’s acclaimed corporations Atlas Group and DID Group Japan have now been amalgamated as one.

The association between the two groups has now strengthened through the joint-venture which aims to provide consistent quality, cost and delivery services to motorcycle manufactures and the after-market suppliers in Pakistan by starting an integrated production of motorcycle chains in Pakistan.

The two had earlier in November of 2017 initiated the assembling of motorcycle chains in Pakistan through a technical collaboration.

DID is a leading supplier of advanced automotive technology, systems and components for the world’s major auto-manufacturers and has operations in numerous countries around the world.

The venture marks a significant milestone in the collaboration between two Companies as it strengthens an already excellent co-operation between the two partners.

Nitin Kumar, a young automobile salesman in South Delhi’s Lajpat Nagar, isn’t having the best of days at work.

Customer footfall at his showroom, which sells Indian carmaker Mahindra & Mahindra’s (M&M) vehicles, has fallen in the recent times.

“The situation has worsened in the past six months,” Kumar said. “Earlier, 60-70% of customers who made enquiries through phone calls and other channels, used to visit the showroom. This has now gone down to 10-20%.”

Falling footfalls and poor sales at Kumar’s showroom is not a one-off instance.

India’s automobile sector is witnessing its worst-ever slowdown. In May, passenger vehicle sales in the country fell 20.55% year-on-year to 239,347 units. It was the steepest drop in nearly 18 years, according to data released by industry body Society of Indian Automobile Manufacturers (SIAM).

Several major automakers are being forced to cut production as inventory piles up.

Mahindra Vehicle Manufacturers, an arm of M&M, informed the stock exchanges (pdf) on June 8 that it would be observing “no production days ranging between 5–13 days” in the April-June quarter as part of “aligning its production with sales requirements.”

Market leader Maruti Suzuki will also shut its plants between June 23 and June 30 to curb the rise in unsold vehicles.

What caused the downturn?
A host of factors has brought India’s automobile industry, the world’s fourth largest by sales, to this sorry state.

Second, automakers are struggling to comply with the government’s new policies, including a total ban on polluting petrol and diesel vehicles, forcing them to discontinue some old models. The government think tank Niti Aayog has recommended that only electric vehicles be sold in the country after 2030.

Besides, the Bharat VI emission standards are set to kick in from April 2020, forcing brands like Maruti Suzuki to remove diesel cars from their portfolio from next year.

“Customers know buying diesel cars will no longer be fruitful, and we cannot convince them otherwise. Petrol variants can still find buyers, but diesel ones continue to wait,” said a Maruti salesperson from East Delhi’s Preet Vihar showroom, who did not wish to be named.

The Economic Survey 2018-19 presented here on Monday by Adviser to PM on Finance, Revenue and Economic Affairs Dr Hafeez Shaikh unfolds that the remittances have increased by 8.45 percent in first 10 months of the ongoing fiscal to $17.875 billion against $16.482 billion during the same period last year.

The remittances during July-April financial year 2019 have declined by 9.28 percent from EU countries, 5.40 percent from other GCC countries. However, a marginal increase in remittances has been observed from Saudi Arabia, 2.08 percent as compared to 9.5 percent decline in the same periods last year. However, visa fee reduction from the Kingdom is likely to boost up the inflows in coming years. A strong increase from USA and UK provided a major push to inflows.

Over the last couple of years, Malaysia has been facing workforce shortage in labour-intensive sectors, such as manufacturing, construction and agriculture. To address the problem, Malaysia raised the wages for both local and foreign workers in its minimum wage policy of 2013. Following this, the number of Pakistanis going to Malaysia for work has been rising since 2014-15, leading to increase in remittances from the country.