India tops the list of charity recipients from private foundations while Pakistan is ranked as the 12th largest recipient of philanthropic giving in the world, according to a report released by OECD (Organization for Economic Co-operation and Development).

Private foundations are filling the huge gaps in public funding of health and education sectors in developing nations. . They contributed  $11 billion for the health sector alone in the three year period, ranking third behind the United States and a global fund for fighting disease.

In addition to being the biggest recipient of private foreign charity,  India has been the number one recipient of official US aid since 1947, according to the US government data.   The country India's first Prime Minister turned to for help during the 1962 China-India war was also the United States. 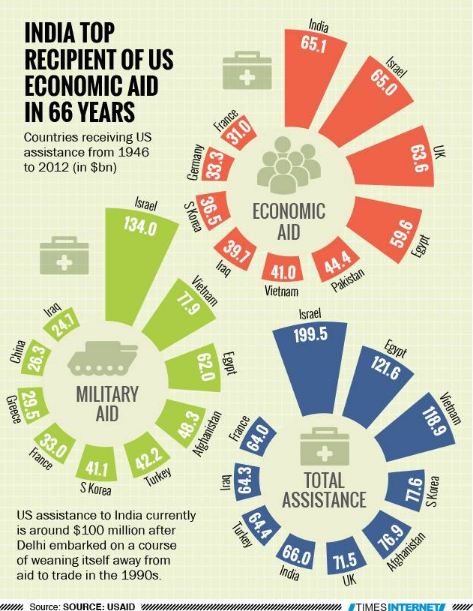 India has received $65.1 billion in US aid since its independence, making it the top recipient of American economic assistance. Pakistan, with its $44.4 billion, is at number 5 on the list.  US data also shows that Pakistan is not among top 10 for military or total economic and military aid.

Pakistanis donate generously to local charities in the country in the form of religiously mandated donations such as "zakat, sadaqa and fitrana".  One of the key measures of empathy is generosity to others, the kind of generosity demonstrated in Pakistan by the likes of  late Abul Sattar Edhi. The Edhi Foundation set up by the great man is funded mainly by small donations from ordinary people in Pakistan.

Anatol Lieven, author of "Pakistan: A Hard Country" wrote the following tribute to the Mr. Edhi:

"There is no sight in Pakistan more moving than to visit some dusty, impoverished small town in an arid wasteland, apparently abandoned by God and all sensible men and certainly abandoned by the Pakistani state and its elected representatives - and to see the flag of Edhi Foundation flying over a concrete shack with a telephone, and the only ambulance in town standing in front. Here, if anywhere in Pakistan, lies the truth of human religion and human morality."

What Professor Anatol Lieven describes as "human religion and human morality" is the very essence of the Huqooq-ul-Ibad (Human Rights) in Islam. Abdus Sattar Edhi understood it well when he said, "there's no religion higher than humanity".

Edhi understood the meaning of what the Quran, the Muslim holy book, says in chapter 2 verse 177:

"Righteousness is not that ye turn your faces towards the east or the west, but righteous is, one who believes in God, and the last day, and the angels, and the Book, and the prophets, and who gives wealth for His love to kindred, and orphans, and the poor, and the son of the road, beggars, and those in captivity; and who is steadfast in prayers, and gives alms."

A recent article written by Shazia M. Amjad and Muhammad Ali and published in Stanford Social Innovation Review said that "Pakistan is a generous country. It contributes more than one percent of its GDP to charity, which pushes it into the ranks of far wealthier countries like the United Kingdom (1.3 percent GDP to charity) and Canada (1.2 percent of GDP), and around twice what India gives relative to GDP."

OECD says corporate donations in Pakistan have increased from  $4.5 million to $56.4 million over the last 15 years. Corporate donations are dwarfed by individual donations made as zakat, sadaqa and fitrana as commanded by the Quran.

In addition to zakat, sadaqa and fitrana, Pakistanis spent about $3.5 billion on Eid ul Azha in 2017, according to analysts. This included sacrifice of $2.8 billion worth of livestock and another $700 million on clothes,  shoes, jewelry and various services. This amount represent a huge transfer of wealth from urban to rural population, including many rural poor, in the country. It also brings philanthropic donations of Rs. 2.5 billion to Rs. 3 billion ($25-30 million) worth of animal hides which are sold to the nation's leather industry.

A Michigan State University (MSU) study of 63 countries finds that Pakistanis have higher empathy for others than people in their neighboring countries. It also finds that the United States is among the most empathetic nations in the world.

The MSU researchers, led by William J. Chopik,  analyzed the data from an online survey on empathy completed by more than 104,000 people from around the world.

The survey measured people’s compassion for others and their tendency to imagine others’ point of view. Countries with small sample sizes were excluded (including most nations in Africa). All told, 63 countries were ranked in the study, according to MSUToday, a publication of Michigan State University.

Pakistanis are among the most generous people in the world.   They contributes more than one percent of the nation's GDP to charity, which pushes Pakistan into the ranks of far wealthier countries like the United Kingdom (1.3 percent GDP to charity) and Canada (1.2 percent of GDP), and around twice what India gives relative to GDP, according to Stanford Social Innovation Review.  Average Pakistanis continue to be empathetic and generous in spite of the violence and the terror they have endured for over a decade. It can only be attributed to the strength of their faith and their adherence to what Prof. Lieven describes as "the truth of human religion and human morality".

Comparing Median Wealth and Income in India and Pakistan


World Values Survey Finds Indians Most Racist
Posted by Riaz Haq at 10:10 AM

Thanks for another informative piece. With regard to charitable giving in Pakistan, we at TCF monitor this closely. In recent years, the ratio of donations to TCF has been 60:40 (Pakistani v. overseas donors). As giving to TCF by overseas donors has increased, the ratio is still 50-50 (2016, 2017).

Pakistan is focusing instead on the rollout of the next batch of the JF-17, the fighter jet it is developing with China, and which is catching up with the F-16 in terms of capabilities.

One former Pakistani minister recalls telling colleagues the US decision confirmed his worst fears. “We have learnt over time that the Americans are terrible when it comes to honouring their promises,” he says. “This was bound to end up in divorce.”

Pakistan’s response encapsulated what had been a slow but steady shift in military procurement away from American-made weapons towards Chinese ones, or those made domestically with Chinese support.

Since 2010, US weapons exports to Pakistan have plummeted from $1bn to just $21m last year, according to data from the Stockholm International Peace Research Institute. During the same period, those from China have also fallen, but much more slowly, from $747m to $514m, making China the biggest weapons exporter to its southern neighbour.

The shift coincided with Islamabad’s growing suspicion about the closeness between the US and India, but was accelerated by the killing of al-Qaeda leader Osama bin Laden on Pakistani soil in 2011, which badly damaged relations with the US.

This year, relations deteriorated again when President Donald Trump suspended $2bn of military aid to Pakistan, accusing it of showing “nothing but lies and deceit” in its promises to crack down on the Taliban and affiliated groups. The problem for Mr Trump is that he needs support from Pakistan as he recommits to the war in Afghanistan, and his officials are finding that Islamabad is less responsive than usual to the US message.


Harrison Akins, a research fellow at the Howard H Baker Jr Center for Public Policy at the University of Tennessee, says: “The Trump administration’s decision to pursue sanctions against Pakistan, alongside Trump’s fiery rhetoric . . . can only push Pakistan further into the arms of Beijing — especially with Pakistan’s shift from US military supplies to Chinese military supplies.

“In the short term, this will make the US mission in Afghanistan more difficult and costly.”

For the US, there could be longer-term consequences that stretch well beyond its complicated relationship with Pakistan. Sales of weapons systems, often backed by preferential financial terms, have become central to the way the US has managed its vast network of military alliances and partnerships — in effect, a form of patronage.

But many of those countries are now advertising their ability to buy some of that hardware from other governments. Key allies such as Saudi Arabia and Turkey have signed arms agreements with Russia. From the Philippines and Thailand in east Asia, to large parts of Africa, world leaders are also increasingly looking to China to provide the kinds of weapons they always used to buy from the US. Between 2011 and 2015, China exported 88 per cent more in weapon sales than during the previous five years, according to Sipri.


For Pakistan’s defence planners, the collaboration with China on defence technology is not only about equipping their own armed services. They are also hoping they can become a significant arms exporter and, in doing so, help to boost the country’s low foreign currency reserves.

Pakistani officials say that between 2014 and 2016 the country exported about $63m of weapons, but last year they announced an intention to increase that to $1bn a year. To do that, they say, they will focus on selling aircraft such as the JF-17, jointly made with the Chinese, to countries such as Egypt, Turkey and Nigeria. Farooq Hameed Khan, a commentator on security affairs, says: “Pakistan’s close collaboration with China has helped us build our quality of weapons. Gone are the days when Pakistan only produced small arms.”

OUTRAGE as #India spends £330 MILLION of £1billion #UK foreign #aid on GIANT BRONZE #StatueOfUnity. BRITONS are outraged after the Indian government spent hundreds of millions of the £1.17billion of overseas aid sent to them by the UK. #Modi #patel http://shr.gs/SrNnexe

While the UK was sending India £1.17billion in aid, the Indian government was spending nearly half of that on the world’s tallest statue.

This new statue is twice the height of the US’ Statue of Liberty and has been met with condemnation for the large bill that it carried.

Over the 56 months it took to build India’s Statue of Unity, the government spent around £330million of UK taxpayer’s aid.


It stands in Mr Modi’s home state of Gujarat at the bend of the Narmada river.

The Prime Minister was the chief minister of Gujarat when the statue was first commissioned.

Construction began in 2012 when the UK sent India nearly £300million.

Since then, the UK has sent India smaller sums.

While this money was coming in, India was spending much of it to build the 579ft bronze replica of a hero of India’s independence movement, Sardar Patel.

In response to this, Tory MP Peter Bone said: “To take £1.1billion in aid from us and then at the same time spend £330million on a statue is a total nonsense and it is the sort of thing that drives people mad.

“What it proves is that we should not be giving money to India.

“It is up to them how they spend their money but if they can afford this statue, then it is clearly a country we should not need to be giving aid to.”

The aid money was also spent on various programmes ranging from improving women’s rights to funding solar panels to investment in low-carbon transport.

In 2014, around £14,000 was spent in Gujarat to increase religious tolerance among young people.

While the UK did not directly fund the statue, the money was spent on programmes that the government could not have afforded if they had been using their own money on building the statue.

It took 3,500 workers four years to build and it also saw a massive land-grab that affected 72 nearby villages that, according to tribal chiefs, forced thousand out of their homes.

Britain’s former International Development Secretary Andrew Mitchell said in 2012 that the UK would stop ending India aid in 2015, but £92.6million was sent to India last year.