A recent Pew Survey of 21 countries reported that 81% of Pakistanis believe in hard work to achieve material success. Americans are the second most optimistic with 77% sharing this belief followed by Tunisians (73%), Brazilians (69%), Indians (67%) and Mexicans (65%). 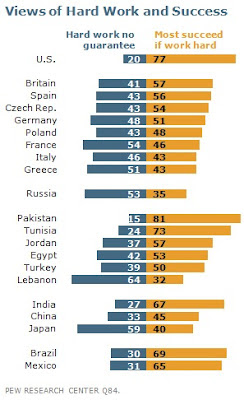 The survey found that "faith in the work ethic is particularly weak in Lebanon, where only 32% of the public anticipates rewards from hard work, and in Russia (35%), Japan (40%), Italy (43%) and Greece (43%), all countries that have suffered greatly from the recent economic downturn. There is also little confidence in hard work in China (45%), despite the fact that it has economically outperformed every country in this Global Attitudes survey".

Reacting to the survey results, former corporate leader Asad Umar who recently left Engro Corporation to join Imran Khan's PTI, said, “Fundamentally, the survey reveals that Pakistanis haven’t lost faith in the country. The Pakistani youth believes that current problems are short-term and can be resolved.” 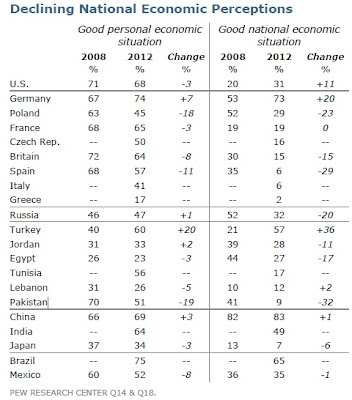 Another survey titled "Pervasive Gloom About the World Economy" reveals that the vast majority of Pakistanis recognize that their country is facing economic difficulties and most hold the government responsible for it. Only 12% of Pakistanis are satisfied with the current direction of the country. However, 23% believe that Pakistan's economy will get better in the next 12 months. 26% expect it to remain the same and 43% think it will get worse.

Defying the prophets of doom and gloom, Pakistanis remain much more optimistic than the people of any of the 21 countries surveyed, including BRIC countries, that their hard work can bring them material success.It's this perpetual optimism and willingness to work hard that helps Pakistanis maintain their upward social and economic mobility.

Riaz - I admire you for pointing out that the glass is more than half full - over all these years - and so consistently.

Thank you for bringing to light certain trends that are not so apparent to my lazy mind.

Eid Mubarak to y'all.

I believe Riaz has cited certain studies in support of his stance, which prima facie sound credible. We as individuals mahave different perceptions about the subject but the promising larger picture that he has depicted with supporting survey results and write-ups by well known institutions / persons can only be countered with equally weighty supporting material.

Here are some interesting recommendations made by a working group of leading Pakistani development professionals and outside experts at the Global Economic Symposium (GES) and detailed by Seth Kaplan in his blog:

Recommended projects given a $100 million budget

Instead of just funding
projects, invest $5m to
endow two institutions
so they will have
independence and
capacity to build for
the long term

These are for 17-20 year
olds before university;
aid going to technical/
vocational schools now,
but none going to this
sector; these youth
susceptible to extremism


Now just in Karachi
and Lahore only
(IFC funded)

Expand coverage of
these to lower
level officials