In Memory of Farooq Nadeem and Naseem Aftab

Truly! To Allâh we belong and truly, to Him we shall return.

The early morning call from Pakistan came as a big shock. Farooq was a dear friend of mine who I had known for over 30 years. He was a frequent business traveler on Airblue within and outside Pakistan. He is survived by his wife and his only son. After the first false reports of survivors among 152 passengers and crew, they both rushed from Karachi to Islamabad in the hope of finding him among the survivors. Now they are waiting to hear of the news of identification of Farooq's remains amidst the wreckage in Margala Hills. Let's hope and pray that they, along with 151 other bereaved families of victims of the worst air disaster in Pakistan's aviation history, can bear this tremendous loss. 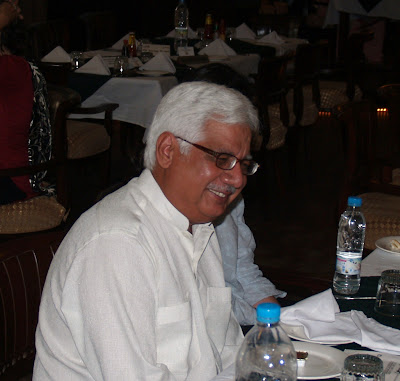 Farooq and I graduated from NED University in Electrical Engineering, and he was the spirit behind a website and email list of our fellow graduates that has helped the NEDians' class of 1974 stay in touch with each other. Thanks to his efforts, I have reconnected and met with a number of fellow NED alums in various parts of the world.

My family and I had the good fortune of spending some time with Farooq and his wife and son during our Karachi visit last year. Since we had gone to attend my nephew's wedding and my sister's house was full with extended family members staying with her, we decided to book a hotel suite during our stay in Karachi. Farooq advised against it and made arrangements for us to stay in a nice suite at a private club near his home. We met several times for breakfast, lunch or dinner at common friends' homes, restaurants and private clubs, and his wife and son drove us around during our stay in Karachi. I still remember when one of my daughters fell ill and Farooq, Annie and Faraz accompanied us to the Agha Khan Hospital's emergency room and stayed for hours until she was treated and released.

Though I was lucky enough to be counted among Farooq's friends, I was not alone as a recipient of his sincere friendship and generosity. It was felt by all of his friends and acquaintances who came in contact with him over the years. The outpouring of deep emotions of sadness and sympathy upon his untimely death are a testimony to the the lasting impression he made on many people who knew him. His unique sense of humor and the jokes he shared via email will be missed by all of us.

The other gentleman, Naseem Aftab from California, was in Pakistan in connection with his daughter's engagement. Now his wife Samina, his newly-engaged daughter, and his son are devastated by their sudden tragic loss.

I did not know Naseem well, but we shared many common friends. Naseem worked for Vertical Systems Inc, a Silicon Valley hospitality IT services company founded and run by fellow NEDians Idris Kothari and Saeed Kazmi. Naseem was well liked and he and his wife Samina were often invited to many of the same parties as my wife and I. Naseem will definitely be missed by Silicon Valley's Pakistani-American community at large.

May the crash victims' souls rest in peace and may Allah's blessings be upon their bereaved families.

Eleven Days in Karachi
Posted by Riaz Haq at 8:19 AM

My sympathies. That is a great tribute to your friend. A very shocking event.

Sudden loss is always traumatic. A friend has told me that one of the Dawoods lost a 19 year old daughter traveling for a sports meet.
I have lost a cousin in a crash in the early 1970s and a friend lost her youngest sister lost in the Swiss Air crash off the coast of Canada in the late 1990s.
So know what it feels like.
My condolences to all who knew these two gentlemen.

There was Quran khwani (for Farooq) today after juma prayers. A lot of friends came.his son returned from Islamabad giving his blood sample for DNA.body not found yet.pls recite fateha

Mr. Farooq Nadeem's death was indeed a shocking news. I knew him very but his personality has impressed me lot.

He was vice president of IEEEP (www.ieeepkhi.org). IEEEP has planned to dedicate the upcoming newsletter to Eng. Farooq Nadeem. After reading your post, I came to know that he was your friend.

We are collecting all sort of information and views for including in the upcoming newsletter. Being the editor of IEEEP newsletter, I would like to request you to please send us your brief views about Engr. Farooq Nadeem. In addition to this if you have any information/pics (esp. old NED pics) that we can add in the newsletter then that would also be appreciated.

We are making all efforts to treasure memories about him in this newsletter.

I just happened to look for Engr. Farooq Nadeem who was friend of my late father, Riyaz ur Rahim Khan after I came to know of Margalla Hills incident.
I dont even know you and you might not even know me but I believe we do share a common loss. When my mom heard Farooq Nadeem's name on TV, she then told me how he was so close to my father. She praised a lot about him.
Do convey condolences to his family on our behalf, if possible.

On other hand, it feels gud that u all NED alums are connected together. I also liked ur blog. Keep maintaining it.

Thank you for your deeply felt sentiments so ably expressed in your comment. Your father Riyaz and I were very close. Prior to Farooq taking the mantle, your father used to be my guide to connecting me with my NED friends whenever I visited Pakistan.

I still have very fond memories of my visit with your father at McGill in Montreal in late 1970s when he was a graduate student there. He was a caring friend and a gracious host.

I had a very profound sense of personal loss on Riyaz's untimely passing.

It was a normal hot end of July day in Karachi.Perhaps it was 15 Shaban ,and around 1030 , I recieved the first call.The CLI showed ,an unidentified number.The caller was Feroze A. After initial talk he asked me if I knew about any bad news.
No,was my reply
Najam Saheb,short time back an Air Blue flight crashed near Islamabad,Farooq Nadeem was on that plane.
My reaction was Inna lillahe Wa Inna
No Najam Saheb,there are some survivors .Let's pray Farooq is amongst them.
Survivors from a plane crashing in hills!

Within five minutes ,there were calls from Tahir S and Sohail M. All disclosing the tragic news and all hoping for Farooq Nadeem to be amongst the survivors.

I asked Tahir S,who has told about survivors?
Interior Minister Rehman Malik has said on a TV channelI
I told Tahir that I would like to pray for Farooq,but this stupid Rehman Malik needs to be educated.He has given false hope to some 140 families ,without any reasoning.They will remain under severe mental strain.

Since that fateful day,there has never been any gathering or meeting of our class friends,where we have not discussed Farooq Nadeem,his personal qualities,his ability to keep the friendship bondage glued up,his jokes,his big heartedness to invite friends regularly for food etc.

And just 3 days before the accident ,he had rang me to invite for opening ceremony of his new factory at Korangi Industrial Area.It was never to be.In this holy month ,I request all listeners to please pray for him,for other friends and also for the family members of friends.