Halal Chicken Curry and Veggie Korma for Brits in Afghanistan 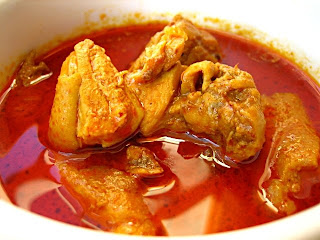 Corned beef hash is giving way to halal chicken curry and veggie korma on the menu for the British troops in Afghanistan, according to a report in the Daily Telegraph.

The new menus - including halal, vegetarian and Sikh and Hindu diets - are designed for troops serving in extreme weather conditions, and will be trialled on the front lines from May until October. Among the new additions are chicken tikka masala, the British version of south Asian curries that was once referred to as a "national dish" by former foreign secretary Robin Cook, and Thai green vegetable curry.

Britain has 4100 troops in Iraq, most of whom will pull out by the middle of the year, and some 8300 soldiers in Afghanistan, most of whom are fighting a fierce insurgency against Taliban militia in the south of the country.

It has been a while since chicken tikka masala" overtook fish and chips as the nation's favorite meal in Britain. It is estimated that curry now accounts for 2/3rds of all eating out. So an additional advantage of making spicy foods available to British troops in Afghanistan is that they will feel less homesick.

There has been speculation that spicy foods have an impact on temperament. It has been suggested that the popularity of curry in England has made the English more expressive of their emotions. Though much is suspected, relatively little is known about the health effects of peppery foods. In general, hot, spicy foods are stimulants. They stimulate the circulation and raise body temperature. If you are living in a hot climate, the increase in body temperature can make you feel cooler by diminishing the difference between your body and the surrounding air and by inducing sweating, which cools the body when the perspiration evaporates.

Nutritionally, capsicum peppers, both sweet and hot, have something important to offer: large amounts of vitamin C, according to the New York Times health columnist Jane Brody. In fact, ounce for ounce, peppers have two and a half times more vitamin C than oranges. They are also good sources of vitamin A (which may account for the claim that they help prevent night blindness) and potassium and contain some iron and protein. At the same time, they are very low in fat and calories: 22 calories in three and a half ounces.

The new cuisine could possibly help the British to stay happy, healthy and cool in the hot Southern Afghan climate while still keeping them sufficiently fired up to fight the ferocious Taliban insurgents.
Posted by Riaz Haq at 5:09 PM

Indian curry first showed up in England on the royal menu of Queen Victoria courtesy of her Muslim teacher Abdul Karim, according to new research by Shrabani Basu and reported by the BBC:

Mr Karim was just 24 when he arrived in England from Agra to wait at table during Queen Victoria's golden jubilee in 1887 - four years after Mr Brown's death. He was given to her as a "gift from India".

Within a year, the young Muslim was established as a powerful figure in court, becoming the queen's teacher - or munshi - and instructing her in Urdu and Indian affairs.

Mr Karim was to have a profound influence on Queen Victoria's life - like Mr Brown becoming one of her closest confidants - but unlike him, was promoted well beyond servant status.

"In letters to him over the years between his arrival in the UK and her death in 1901, the queen signed letters to him as 'your loving mother' and 'your closest friend'," author Shrabani Basu told the BBC.

"On some occasions, she even signed off her letters with a flurry of kisses - a highly unusual thing to do at that time.

"It was unquestionably a passionate relationship - a relationship which I think operated on many different layers in addition to the mother-and-son ties between a young Indian man and a woman who at the time was over 60 years old."
Principal mourners

Ms Basu hints that it is unlikely that the pair were ever lovers - although they did set tongues wagging by spending a quiet night alone in the same highland cottage where earlier she and John Brown used to stay.

"When Prince Albert died, Victoria famously said that he was her husband, close friend, father and mother," Ms Basu said. "I think it's likely that Abdul Karim fulfilled a similar role."

Mr Karim's influence over the queen became so great that she stipulated that he should be accorded the honour of being among the principal mourners at her funeral in Windsor Castle.

"The elderly queen specifically gave this instruction, even though she knew it would provoke intense opposition from her family and household," Ms Basu said.

During his service with the queen, Mr Karim was bestowed with many honours as the royal party travelled around Europe meeting monarchs and prime ministers.

He taught her how to write in Urdu and Hindi, introduced her to curry - which became a daily item on the royal menu - and eventually became her highly decorated secretary.

Curry is fast becoming thought of as a new international superfood. Curry has been shown in studies to have amazing health benefits such as increasing metabolism, relieving arthritis pain and helping to combat heart disease.

Now, a recent study has shown that adding curried foods to your diet at least three times a week may help you live longer. A study of nearly a half million Chinese people indicated that those who ate curry three times a week or more had a 14% less risk of premature death.

Curry was discovered during the 17th century, and has been refined over time to make the yellow-orange spice you see on store shelves today, which usually includes a mix of spices such as turmeric, coriander, cumin, fenugreek and a variety of chili peppers.

Among the superfood meals that the study participants ate on a regular basis? Chili. Fresh chili stews are full of spicy, curried antioxidant rich foods such as chili peppers. Fresh chili is known to health experts around the world to be packed full of nutrients that help fight disease, combat inflammation and ward off obesity.

If you’re a firm believer that spicy, curried foods do indeed improve health, here are some ways you can incorporate more curry into your diet.

Curry most often comes in a powder or a paste form. This makes it easy to add it to many foods, such as:

A nice pita sandwich with chicken, sprouts, fresh peppers and curry paste brings a healthy lunch or dinner to your plate

Adding curry to your meals will help ensure you are doing what you can do to live a healthier, longer life.

The new spot, located at 340 O’Farrell St. in the old Naan N Curry, will be the first step in what’s a miniature Bay Area takeover for the East Coast food cart. (They have plans for another spot in Berkeley). Right now, the Halal Guys have 200 locations in development across the U.S., Canada and Southeast Asia.

We’ve been following the news of Halal Guys setting up shop in the Bay Area for the last few months now. This latest update means they’re less than a month from dishing out those renowned chicken gyros or falafel between Taylor and Mason streets for both Union Square and Tenderloin audiences.