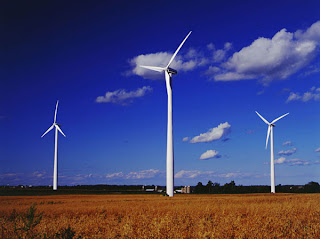 Suzlon, India's wind power giant, has reported a quarterly loss after years of expansion and profit growth. It was hurt mainly by the ongoing global credit crunch, slowing wind turbine sales, and by rising costs and a provision to do repairs stemming from the widely reported quality problems at the wind-turbine manufacturer's overseas plants.

Chairman and Managing Director Tulsi Tanti said the global credit crunch is likely to hit sales growth in the wind-energy sector, which had a compounded annual growth rate of more than 34% over the past five years.

But Suzlon said it expects the industry's outlook to turn favorable by 2010 as easing credit and lower costs boost demand from the U.S., Europe, China and India.

U.S. factories building parts for Wind turbine industries have announced a wave of layoffs in recent weeks, and trade groups are projecting 30 to 50 percent declines this year in installation of new equipment, barring more help from the government, according to the New York Times.

Prices for turbines and solar panels, which soared when the boom began a few years ago, are falling. Communities that were patting themselves on the back just last year for attracting a wind or solar plant are now coping with cutbacks.

“I thought if there was any industry that was bulletproof, it was that industry,” said Rich Mattern, the mayor of West Fargo, N.D., where DMI Industries of Fargo operates a plant that makes towers for wind turbines. Though the flat Dakotas are among the best places in the world for wind farms, DMI recently announced a cut of about 20 percent of its work force because of falling sales, the NY Times reports.

Much of the problem stems from the credit crisis that has left Wall Street banks reeling. Once, as many as 18 big banks and financial institutions were willing to help finance installation of wind turbines and solar arrays, taking advantage of generous federal tax incentives. But with the banks in so much trouble, that number has dropped to four, according to Keith Martin, a tax and project finance specialist with the law firm Chadbourne & Parke.

Wind and solar developers have been left starved for capital. “It’s absolutely frozen,” New York Times quotes Craig Mataczynski, president of Renewable Energy Systems Americas, a wind developer. He projected his company would build just under half as much this year as it did last year.

The wind and solar industries are hopeful that President Obama’s economic stimulus package will help. But it will take time, and in the interim they are making plans for a rough patch.

Solar energy companies like OptiSolar, Ausra, Heliovolt and SunPower, once darlings of investors, have all had to lay off workers. So have a handful of companies that make wind turbine blades or towers in the Midwest, including Clipper Windpower, LM Glasfiber and DMI.

Some big wind developers, like NextEra Energy Resources and even the Texas billionaire T. Boone Pickens, a promoter of wind power, have cut back or delayed their wind farm plans.

President Obama has often talked about America's energy policy and dealing with its impact on climate change as a priority. He wants to create five million new jobs by strategically investing $150 billion over the next ten years to catalyze private efforts to build a clean energy future. Transformation in the way people and businesses use technology could reduce annual man-made global emissions by 15 per cent by 2020 and deliver energy efficiency savings to global businesses of over $ 800 billion, according to a new report published by independent non-profit The Climate Group and the Global e-Sustainability Initiative (GeSI). The choice of a Nobel laureate scientist, Berkeley's Dr. Steven Chu as energy secretary by Obama reflects this priority.

There were reports in 2007 that some of the wind projects in Pakistan could not proceed because of the lack of wind turbines availability, even though the land had been allocated and permits issued for this purpose. Most vendors were sold out through 2009. The contract terms in turbine supply agreements became increasingly favorable to the vendors, with less warranty, earlier and larger pre-payment requirements, and higher prices. After years of boom, the second half of 2008 saw a bust in the wind energy sector with credit being extremely tight.

Finally this year, Pakistan awarded a contract to a Turkish company to set up a wind farm near Hyderabad. President of Zorlu Enerji (Pvt) Ltd., Murat Sungar Bursa, who signed the agreement with HESCO (Hyderabad Electric Supply Company) in Pakistan, said that the estimated cost of 50 MW project was 120 million dollars. He added the company was also considering to further expand the project up to 250MW. He said incentives offered by Pakistan’s renewable energy policy was a major factor in the company’s decision to invest here. He said that capacity of the wind farm will be enhanced upon successful completion of 50 MW phase. Zorlu Enerji has become the first company to establish wind farm for power generation in Pakistan after signing Energy Purchase Agreement with Hyderabad Electric Supply Corporation for purchase of six MW electricity generated at the company’s facility in Jhimpir. NEPRA (Pakistan's power regulator) has awarded tariff of US cents 12.1057 Per KWH, which is cheaper than the electricity generated from thermal sources. The power generated from the first phase would be routed to the Jhimpir gird station by HESCO and would be sufficient to electrify 6,900 homes in Hyderabad region. Harnessing the strong winds coming from South West, the wind farm is first major commercial wind power project of the country, comprising five towers in the first phase with an installed capacity of 1.2MW wind turbine generator per tower.

A video clip about renewable energy in Pakistan:

Community Based Renewable Energy Project in Pakistan
Posted by Riaz Haq at 8:39 AM

I have been in Renewable since 2005. Now on Geothermal. Yes there is slowdown. But its also in Fossil.
Suzlons problem is also tech obsolecence. They still have first gen turbines.

Ending a federal tax break for wind farms in India, the largest market for turbines after China and the U.S., would cause a $540 million drop in demand just as suppliers including General Electric Co. (GE) expand local capacity, according to Bloomberg News:

Wind park installations may fall 15 percent in the financial year starting April 2012 from the 2,600 megawatts projected for this year should the benefit be discontinued, said Ashish Sethia, lead analyst with Bloomberg New Energy Finance in New Delhi.

The government wants to axe an accounting rule next year that encouraged companies to erect most of India’s 14,157 megawatts in wind projects as a way of cutting taxes rather than generating power. It favors a less-generous subsidy that companies have been slow to adopt.

“We could see some disturbance in demand and some filtering out of smaller players,” said Mahesh Makhija, director of renewables at the local unit of CLP Holdings Ltd. (2), Hong Kong’s biggest power supplier and India’s largest developer of wind farms. A 400-megawatt slump in demand could cut investment by 24 billion rupees ($540 million) based on current construction costs.
---------
A shakeout may intensify turbine suppliers’ push for new business as wind installations peak in developed markets in the U.S. and Europe. Turbine suppliers in India jumped by a third to 20 last year as the country installed about $3 billion of wind capacity, the most after China and the U.S.
Surpassed Wind Targets

While global wind farm installations declined for the first time in almost two decades in 2010, India overshot the government’s target by 18 percent.

The alternative subsidy favored by the government “will shift the market focus from investment incentives to production incentive, which is very relevant in the backdrop of energy shortfalls in the country today,” GE said.

“This will attract new developers” that will focus on making power more available more efficiently, it said in an e- mailed response to questions.

Suzlon Energy Ltd. (SUEL), India’s dominant supplier, said in an e-mail that it welcomed “this shift across investor groups” who are now looking with a long-term view that would mean larger- sized projects, lower transaction costs and more evenly distributed demand throughout the year for the industry.

Enercon India Ltd., India’s second-biggest turbine supplier, declined to comment on whether the end of the tax break could impact demand. Suzlon shares fell as much as 4.4 percent, the most in three weeks, and closed down 2.7 percent in Mumbai trading. Suzlon’s stock has dropped 10 percent this year.
Suzlon, Gamesa Competition

Suzlon faces increasing competition from new entrants. Its share of new wind installations in India dropped below 50 percent for the first time last year while Spain’s Gamesa topped Vestas Wind Systems A/S to emerge as the nation’s third-biggest wind supplier after just 18 months in the market.

The Generation-Based Incentive pays wind farms 500 rupees for every megawatt-hour fed to the grid.

Wind developers are pressing to double that to 1,000 rupees and remove an overall cap of 6.2 million rupees per megawatt to make the subsidy as lucrative as accelerated depreciation, said K. Kasthoorirangian, chairman of the Indian Wind Power Association.

Only 543 megawatts of wind projects have signed up for the Generation-Based Incentive since its introduction in December 2009, which is available for as much as 4,000 megawatts of projects, according to ministry data....

Here's a press release of Hitor Group in Pakistan:

Hitor Group Inc. is pleased to announce it has executed an agreement with Orient Renewable Energy (Ptv) Ltd. relating to the Hitor technologies including a Manufacturing Plant for the fabrication of construction components and systems for housing and International Housing Development Projects.

Hitor will oversee the development, construction, commissioning and operations of a plant for construction components and systems including but not limited to a manufacturing plant for Structural Steel Systems™ or other Hitor technologies. Orient Renewable Energy (Ptv) Ltd. will contribute it's contacts, licenses (as needed), agreements and relational know how and development work to date as well as overall Primary Project Development services in the provision of process development, negotiations with the local Government and approval authorities of and the financing required for the manufacturing plant.