From Haryana With Love 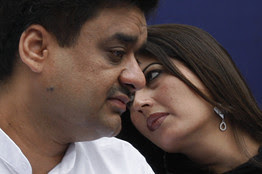 The story of Chand and Fiza Mohammad in Haryana, India, appears to have all the elements of a Bollywood Masala movie, except the as-yet undetermined ending.

Mr. Chander Mohan aka Chand Mohammad, Deputy Chief Minister of Haryana, whose overwhelmingly Hindu state of 23 million people is among India's most prosperous, announced that he had converted to Islam. The 43-year-old father of two added that he had also just wed his second wife, Anuradha Bali aka Fiza Mohammad, another Muslim convert, according to the Wall Street Journal.

Serving his fourth term in Haryana's legislature, Mr. Mohan was widely touted by his supporters as a future chief minister. But soon after the conversion announcement, he was removed from his job and relieved of his security guards. The Haryana government also dismissed his new wife, 37-year-old lawyer Anuradha Bali, from her position as the state's assistant advocate-general.

The official reason for both sackings was that Mr. Mohan, now known as Chand Mohammad, and Ms. Bali, who now goes by the Muslim name of Fiza, failed to perform their government duties. Both dispute this assessment. "This was all just because we became Muslim. There is no other good reason," Fiza told the media recently.

Piecing together different accounts and the unfolding events, it appears that Chand was primarily motivated by love for Fiza. But he faced many obstacles. As a Hindu, he could not have two wives and divorce under Indian law would be a long and complicated process. He had the option of having Fiza as a mistress like many other politicians but the couple decided against it. So they chose to convert to Islam and marry in a religious Muslim ceremony recognized by Indian law and went public with it. The shocking announcement came as India was reeling from the Mumbai terrorist attacks in December.

What Chand underestimated was how crucial religious identity remains in a country that bills itself as the world's largest secular democracy. Mr. Mohan's supporters, who have followed the twists and turns of the case reported by the Indian media, largely agree that religion played a huge role in the drama as it unfolded. Their logic: It was politically untenable to have a Muslim deputy chief minister in a state like Haryana, which was the scene of some of the worst violence between Hindus and Muslims during partition along religious lines in 1947.

Mr. Mohan "has lost his Hindu vote bank, and he would lose the next election here if he stays a Muslim," says 52-year-old engineer Jeevan Singh told the Wall Street Journal. Mr. Singh resides in the politician's Panchkula constituency and voted for Mr. Mohan in previous elections.

The Haryana government's information secretary, K.K. Khandelwal, denied that religion was a factor. He said that Mr. Mohan and Ms. Bali had been fired simply for not doing their jobs. Yet, he added: "In public life you have to maintain certain standards and cannot behave like Romeo and Juliet. This became a matter of jokes. The government -- and the chief minister -- had to save their image."

As a result of the tremendous social hostility and family pressures and extreme stress, both Chand and Fiza are now apparently estranged and physically separated from each other. Fiza has been hospitalized after an overdose of sleeping pills and Chand's whereabouts are unknown.

This story is still unfolding. How it will end remains a mystery. But it does raise serious questions about the reality of the secular nature of India's democracy.

Here's a video clip of Fiza sharing the amorous text messages Chand sent her in his pursuit of her as a devoted suitor:

The Rise and Rise of Mangalore's Taliban

Hindu Nationalists Gang Up on Musharraf at Stanford

Can India "Do a Lebanon" in Pakistan?

Priest Survivor: Hindu Radicals are Terrorists
Posted by Riaz Haq at 10:33 AM

It's really sad but sweet too.

As a Hindu, he could not have two wives and divorce under Indian law would be a long and complicated process. He had the option of having Fiza as a mistress like many other politicians but the couple decided against it. So they chose to convert to Islam and marry in a religious Muslim ceremony recognized by Indian law and went public with it.

Doesn't that make you go "Awwwww ... so sweet"? Very noble of Chand to want to keep the first wife and have a nice big(ger) happy family. What kind of moron state allows some of its men to have multiple wives? We've been appeasing instead of secularizing. It's got to stop. Chand's behavior is unacceptable (by current Indian standards) as a private individual. That it's allowed by some silly perversion of the law is another matter. He and Fiza need to sort this private mess out before they can be considered again for public life. Only One Wife at Any Time!

Better remove from the job than kill him and his wife, which is what Islam has for those who convert away from Islam.

There is nothing sweet about it. This guy dumped his wife and kid for a sexy assistant attorney general.
This guy called Mohan Chand didn't divorce his first wife only because most of the property he owned was in the name of his first wife and it would be financially disastrous for him to divorce her not because of his "Romeo Love" towards the cute lawyer.
I would also like you to visualize what would have happened to them, if the case is reverse(convert from Hindu to Islam) for a politician holding important position in Pakistan...ha ha beheaded?stoned?hanged?
This is not the first time. Actor Dharmendra of Sholay fame also converted to Islam for keeping two wives(Meena Kumari and Hema Malini). In India, only Muslims can have four wives, if I keep two women in my home "who are not relatives" ;-) as a Hindu, I can get arrested under immoral trafficking act and can spend years in jail. For Muslims, they can have fun with maximum 4 wives and if they get bored can terminate by triple talaq. So you are giving in short good publicity for Indian system at the same time a backhanded compliment to a perverse religion called Islam.

Dharmendra married twice and has maintained both his wives. His first marriage was to Prakash Kaur at the age of 19 in 1954.His second marriage was to the Bollywood actress Hema Malini. The couple are said to have fallen in love on the set of Sholay (1975) although they had made films together before. He had to convert to Islam to gain permission to marry a second wife, and his religious name became Dilawar Khan and he is member of party BJP and Member of Parliment
source:en.wikipedia.org

p.s. I am all for polygamy..but there should be equality of rights i.e. polygyny and polyandry must be legal and accepted.It should not be a one way street.

so much for "Indian secularism" propaganda....

Chand has been tortured by Indian society and he has been effectively given a political death sentence for his "crime". Fiza has suffered as well. She lost her livelihood for the same "crime".

In any event, I think it doesn't make a lot sense to compare India's "secular democracy" with Pakistan's "Islamic Republic". Each must live up to the standards it sets for the country.

But I do not know of any instance when a convert from Islam has even been prosecuted in Pakistan, much less given a death sentence for it.

Yes, I agree. Pakistan is as oasis of tolerance. Land of the Pure and Citadel of Islam it may be - with its politicians intent on seeing its demise (hint - post on Sharif brothers?). But persecution/prosecution of it's minorities? No way! The execution of many Christians by the state using the fair and righteous Blasphemy Laws is just a figment of the Western media. Just ask Abdus Salam and Zafarullah Khan. In fact, women too have been exalted with the righteous Hudood Laws. Oh, that the rest of the world follows this shining example. The people of "India" must curse the British for carving a Dar ul Harb from this Land of the Pure where a billion+ people live an unenlightened existence, instead of reverting to the Golden Era when they could have lived with state patronage and happily paid jizya. :-)

It really is shocking how India treats former Hindus who converted to Islam...look at the other guy, Dileep aka AR Rahman. He is a real pariah in India today.

Riaz, you sad old man. I have read many ridiculous things here,but this takes the cake. You make this fool to be some kind of a martyr. He only converted because under indian law, as a muslim, he could marry again. This was a conversion of convenience, not of true faith. And he wasnt being 'punished' for his religious beliefs, but because he had abandoned his family and wasnt doing any governing (his first job).

What Chand did was illegal but there is always a recourse to it, convert to Islam and be absolved of all crimes. Another proof that Islam is a magnet for criminals and crimes. So Mr. Hak, please do not slam Indians or the Indian society under your thinly veiled defense of Islam, a curse that all you muslims unwaveringly live with.

Last year, officials in Haryana recorded about 100 honor killings of young people caught in the war between clan, caste, culture and cupid. Banwala's case is the first honor-killing trial to secure a verdict, although a similar trial is underway. In that case, four people are accused of beating and hacking a young man to death with sticks, sickles and scythes last year after he married a woman from a neighboring village, a relationship villagers also regarded as incest.

In 2008, a judge in Haryana and Punjab, Kanwaljit Singh Ahluwalia, said the number of "couples hiding themselves in the corridors of court" had risen in recent years. In response, the government set up hotlines and opened shelters for the runaway couples.

Mewa Singh Mor, the president of all clan councils in Haryana, said the councils do not order killings but often ostracize and boycott the defiant couples and their families.

"It is a shame that so many girls and boys are eloping nowadays, under the influence of TV and movies. Our constitution tells our youth what their rights are but says nothing about their social duties," he said. "These couples are like an epidemic. They are destroying our social fabric."

Jagmati Sangwan, a social activist, said the council meetings are "frightening, Taliban-type" gatherings that bar women but announce stern decisions on matters that directly concern them.

"There are seeds of an egalitarian society in such self-choice marriages, and these councils cannot tolerate that," said Sangwan, director of the women's studies center at the Maharishi Dayanand University in Haryana. "Victims of honor crimes fear filing a police complaint, and witnesses are hard to find. Sometimes the police dismiss them, saying it is a private, community matter. We want to break the social acceptance that honor crimes and killings enjoy."

Meanwhile, the court has posted two security guards outside Chanderpati Banwala's home. She has a fresh battle ahead when a higher court hears the defendants' appeal. "I will not give up. I want to teach them a lesson, so that innocent young couples are not killed again in the name of tradition," she said. "Now I trust only the court and God."