Pakistan's Arsalan Ash defeated the “hometown” American hero Hoa “Anakin” Luu in a thrilling Grand Finals set to win first place in Tekken 7 at CEO 2021 in Florida. Arsalan won every single match without dropping a single game. This came against some of America’s top players, including EVO 2021 Online champion Marquis “Shadow_20z” Jordan. Known for his ability to use several different characters, Arslan Ash stuck with Zafina for the entirety of the CEO 2021, according to a report in EsportsTalk.

CEO 2021 was the first major fighting game tournament since the start of COVID-19 pandemic in 2020. The victory is Arslan Ash’s first major win in the United States since his memorable performance at EVO 2019 in Japan. It is also the second offline event he has won in 2021 after taking 1st at WePlay Ultimate Fighting League last April.

Prior to the latest win at CEO 21, Arslan Ash Siddique won three top ESports awards, including Player of the Year award for 2019, according to ESPN.com. In December awards, Aslan Ash won the Best Esports Player award under both the fan and ESPN choice categories. He was also the first-runner for Best Moment of the Year award in the fan poll. The nomination was based on his EVO wins.

Arslan put Pakistan on the esports map following his surprise first-place victory in Tekken 7 at EVO Japan 2019 and EVO 2019. Before October 2018, Ash, the Pakistani Tekken 7 phenom, had never competed in a major international tournament. Now, at the end of 2019, he is an international star and the only person to ever win the Evolution Championship Series Japan and its American counterpart in  Las Vegas the same year.

Arslan is not the only successful Pakistani esports competitor on the world stage. Karachi-born Pakistani Syed Sumail Hasan, 19, is the world's youngest video gamer to surpass $1 million in earnings in esports. In fact, he has earned $3.6 million so far as an international Dota 2 player, ranking him the 10th biggest winner in the world, according to esportsearnings.com website which tracks players' earnings. Sumail started playing Dota 2 at the age of 7. He now lives in a Chicago suburb as a permanent resident of the United States.

Arsalan Ash Siddique, 23 years old player from Lahore, Pakistan, caused a stir in Fukuoka Japan when he defeated the world's top players to win EVO championship in February, 2019, according to Asahi Shimbun. In his victory speech, Arslan acknowledged many unknown Pakistani players who are also quite strong but could not join the competition because they could not get the visa to travel to Japan. 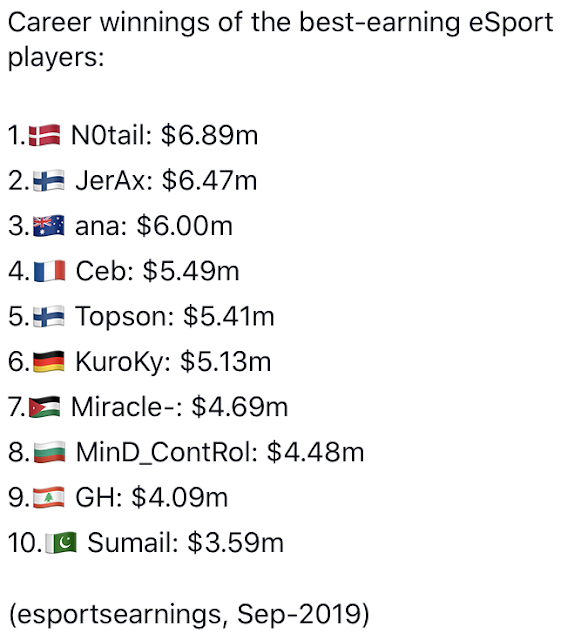 It wasn't easy for Arsalan to reach Japan to participate in the contest. He had to jump through many hoops and travel through several transit countries each of which made it difficult for him. When he arrived at Haneda airport in Japan,  he only had Pakistani rupees and no exchange would accept them. Hungry and tired he tried his luck at the food court but no one would accept the Pakistani currency. His next flight was from Narita airport an hour away by public transport. To travel he needed to buy a ticket but did not possess any local currency, according to SBS Urdu.

Arsalan was exhausted and ready to give up his dream when he finally got through to his Japanese sponsors who helped him out. Needless to say he got no help from Pakistani diplomats through his challenging journey.

In spite of visa denials and other travel challenges faced by Pakistani players, the country ranks 25th in the world for players' earnings in 2019, according to esportsearnings.com.  Ranked above Pakistan are  mainly rich industrialized nations from North America, Europe and East Asia. All South Asian nations rank below Pakistan. Players from India rank 63rd, Sri Lanka 98th, Afghanistan 108th, Bangladesh 115th and Nepal 123rd.

Here's a video of Arsalan's competition at CEO 2021 Finals in Florida: