My wife Yasmeen and I returned from a 10-day Alaska cruise over the weekend. We left from Pier 27 in San Francisco aboard the cruise ship named Grand Princess on Pakistan's Independence Day and came back on August 24, 2019. The ship sailed almost full with about 3,000 passengers and 1,100 crew. It was a fun-filled cruise with excellent food and entertainment with ports of call at Ketchikan, Juneau and Skagway in Alaska as well as Victoria, British Columbia in Canada. It was smooth sailing except one night on our way to Victoria when the sea was really rough making some of the passengers really sick. Seeing massive glaciers up close and watching whales made for some the highlights of our trip. 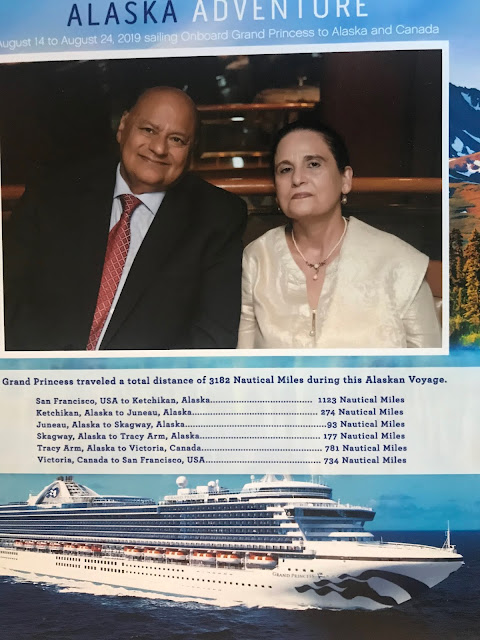 We were picked up from home on time at 12 noon on August 14 by a driver from East Bay Shuttle driving a Toyota Sienna minivan and arrived at San Francisco Pier 27 at about 1:15PM. The process of baggage handling and check-in was very efficient and we soon found our way to our cabin where our baggage was already sitting at the door. We put the baggage inside our room and left for the lunch buffet that was all set for the hungry passengers on Deck 14. The ship sailed from the port exactly at 4 PM as scheduled.

The ship sailed for two days and nights toward our first port of call at Ketchikan in Alaska. The second night was a Formal Night when all on board dressed up for pictures. Most of the passengers chose fine dining with sit-down dinner available at multiple restaurants on the ship. 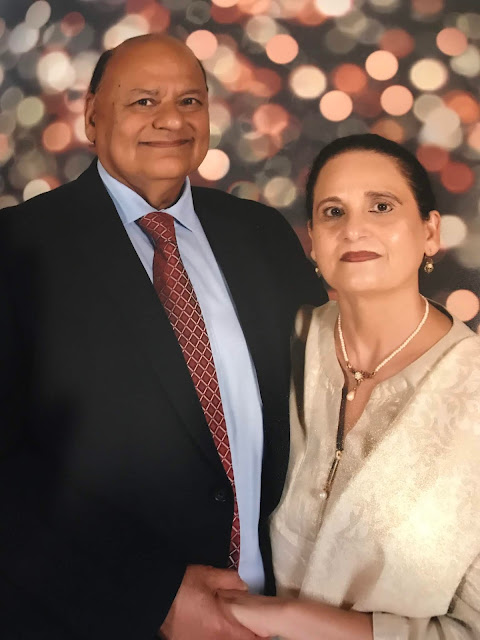 Yasmeen and I had lots of pictures taken at several spots chosen by professional photographers. We then sat down for dinner at Michelangelo restaurant on Deck 5. Yasmeen had shrimp cocktail and I ordered Caesar's salad to start. Yasmeen had steak and I ate almond crusted salmon for the main entree. We topped it off with Creme Brulee for Yasmeen and a slice of fruit tart cake and a cup of cappuccino for me. 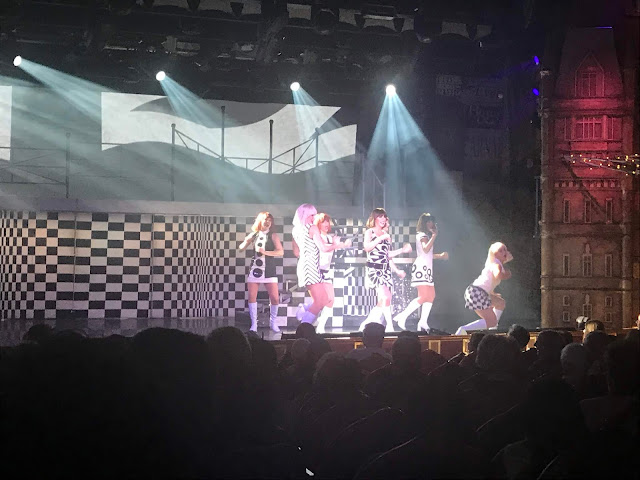 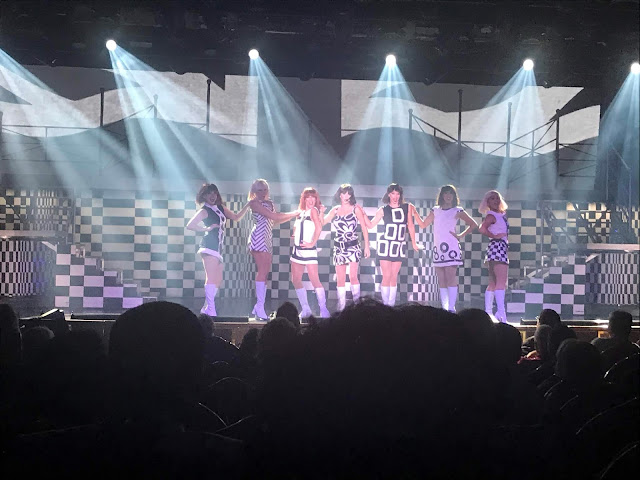 After dinner, we both went to the Princess Theater to see the "British Invasion" show. It was mostly about the Beatles but also featured Elvis Presley “ the King” and The Rolling Stones. The cast ably performed with songs and dances that got the audience up on their feet singing along the favorites like Help Me, Lucy in the Sky” and I Don’t Get No Satisfaction”. It was loads of fun!

We arrived in Alaskan town of Ketchikan on the morning of Saturday, August 17, 2019. Our disembarkation photo op with a man holding an axe said it all: The population of Ketchikan traditionally relied on cutting down trees for their livelihood. It sits on the edge of Tongas National Forest, America's largest national forest covering 16.7 million acres. Logging was banned in large parts of it in 1990. Since that ban, tourism has emerged as the largest industry in Ketchikan and similar other towns in Alaska. The second largest industry here is salmon fishing. 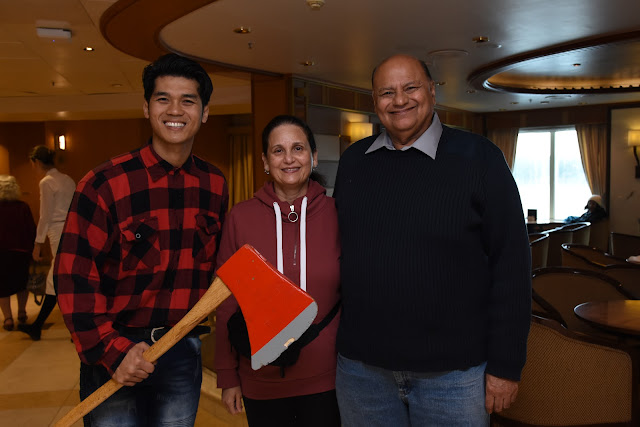 We took "Duck Tour" in an amphibious vehicle which took us on a tour of both the land and the sea. On this tour, we saw several fresh water streams where salmon come from the sea to spawn. 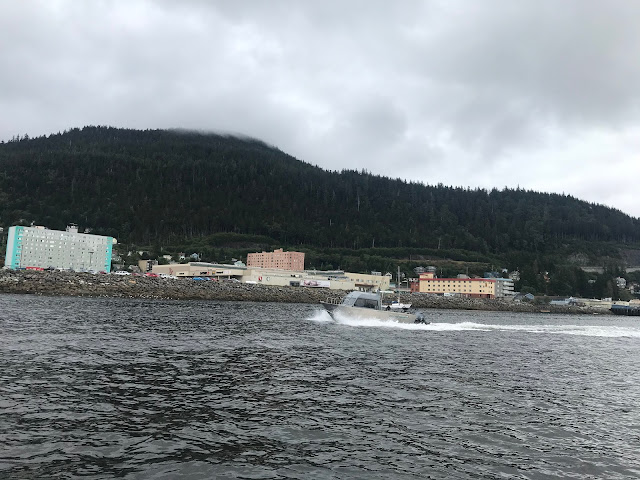 The original native people who have been living here since well before the Europeans arrived are called the Tlingit people. They first suffered at the hands of Russians from 1733 to 1867 when Alaska was purchased by the United States. Then came the Gold Rush that brought a huge influx of Americans who brought many infectious diseases that almost wiped out the native population.

Back on the ship, we watched Bohemian Rhapsody. It’s a biopic about British singer Freddie Mercury who was born Farrokh Bulsara in Zanzibar to Parsee Indian parents. The word Bismillah is in the lyrics he wrote for the Bohemian Rhapsody song. He was the lead singer of the band Queen that produced some of the most popular hits in 1980s like We Will Rock You, We Are the Champions and Another One Bites the Dust. Freddie is played by Egyptian born actor Rami Malek who won the Best Actor Oscar for his role. It’s worth watching.

Our ship docked at Juneau, the capital of Alaska and the second largest city in the state, on Sunday August 18, 2019. We saw three other large cruise ships already in port, indicating Juneau is a popular tourist destination.

We took Mount Roberts Tramway, an aerial tramway located just south of downtown Juneau. The tram hanging from cables made a 6-minute ascent of 3,819-foot Mount Roberts from the cruise ship docks to a height of about 1,800 feet.

In the evening, Yasmeen and I met with Libby Riddles, the first woman to win the Iditarod dog sled race . She was invited on board to talk about her experience of one of the world's toughest races in the  frozen Alaskan Tundra. 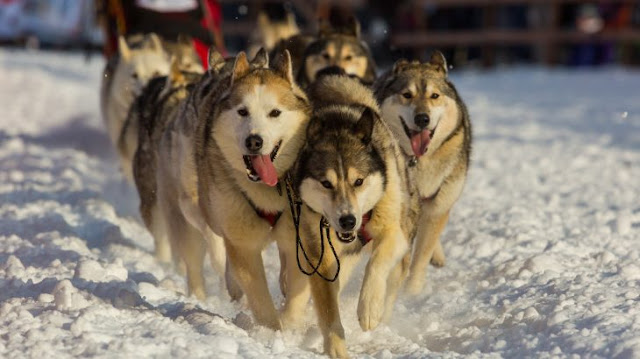 Skagway is the northernmost point that our ship sailed to on this cruise on Monday August 19, 2019. This town was the biggest attraction during Klondike Gold Rush years. We took a bus tour that took us to the historic White Pass and Yukon route. 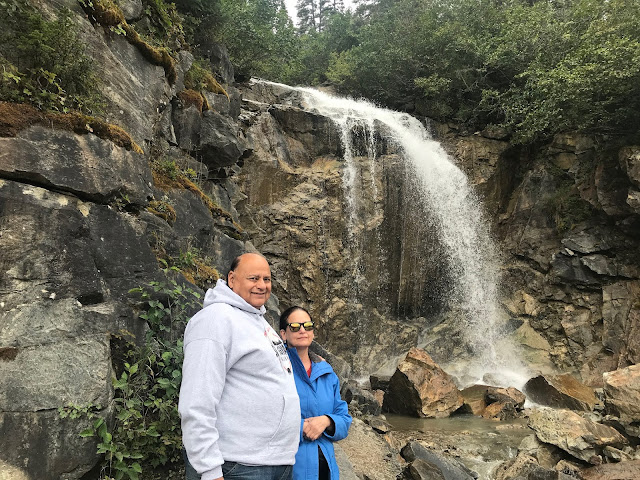 We passed through Canadian territory on this tour. It's a very scenic road with glaciers visible on mountain tops, several beautiful streams and waterfalls and trees growing on high mountains.

Some of our fellow tourists took the steam engine train that runs the route where railroad tracks were first laid during the Klondike Gold Rush.

We sailed through TracyArm Fjord, named after Civil War General Benjamin Franklin Tracy, toward a huge glacier on water's edge. Along the way, we saw several small and large icebergs floating on the water. Tracy Arm is a narrow, 27-mile long inlet 50 miles south of Juneau. The Fjord at its narrowest is no more than half mile wide—and cliffs rise over 3,000 feet on either side, with waterfalls covering them. 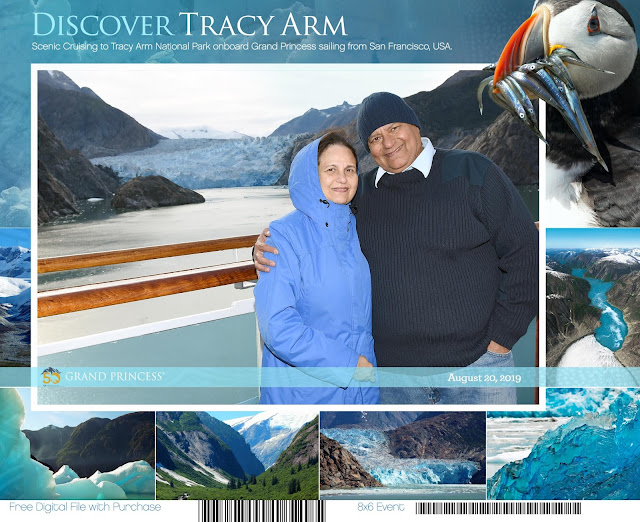 The ship made a tight S-turn and stopped as we got really close to the face of twin glaciers, known as Sawyer Glaciers, to allow us to a take a close look. Photographers hovered around us to take lots of pictures with the majestic glacier in the background.

Our last stop on August 22 was in the city of Victoria in British Columbia, Canada. It's a charming town that reminds of London, England. Some of the oldest buildings, including the provincial legislature, were designed by British architect Francis Rattenbury (1867-1935). Victoria's Chinatown is the second oldest in North America after San Francisco's. Victoria is sometimes described as the city of gardens. Its Butchart Garden is world famous for its floral display gardens. 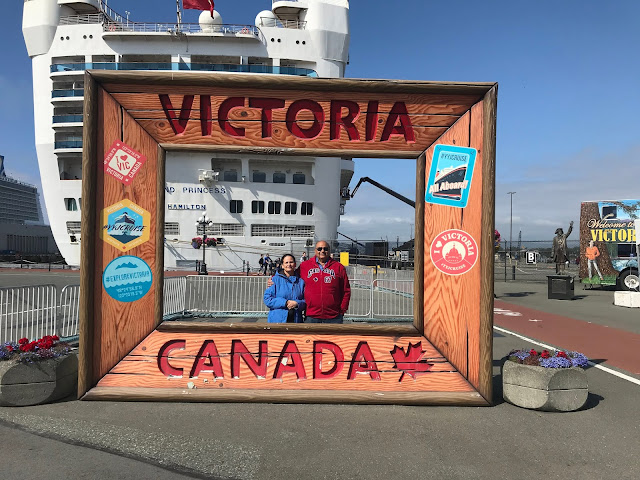 We took a bus tour of the city that took us to Oak Bay, home of some of the most expensive real estate in western Canada. Along the way, our tour guide talked about the architecture of various buildings and spent considerable time telling us tales of architect Francis Rattenbury's scandals.

We had our cruise's second formal night on August 22, 2019. We put on formal clothing, had pictures taken and sat down for dinner at a restaurant. Yasmeen started with Caesar's salad and I had escargot. Our main course was chicken for Yasmeen and salmon for me. Yasmeen chose fresh fruit and I had chocolate cake. 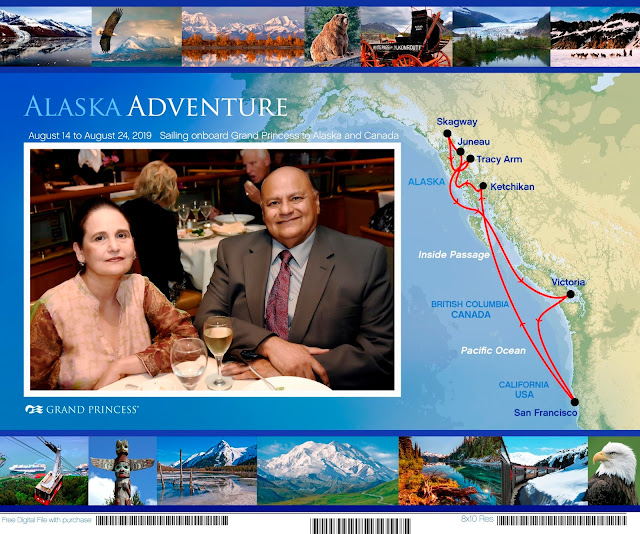 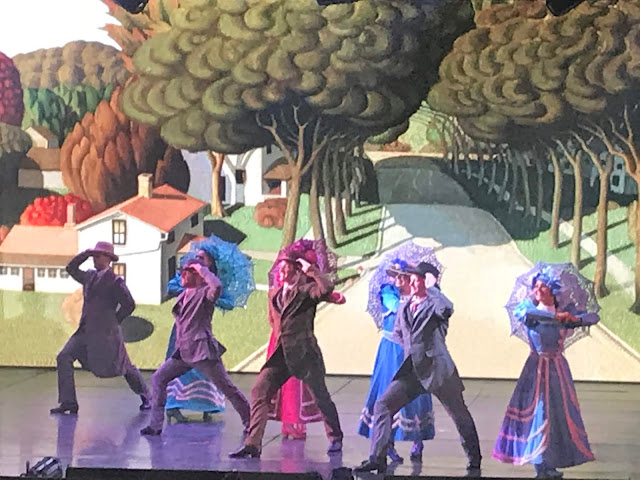 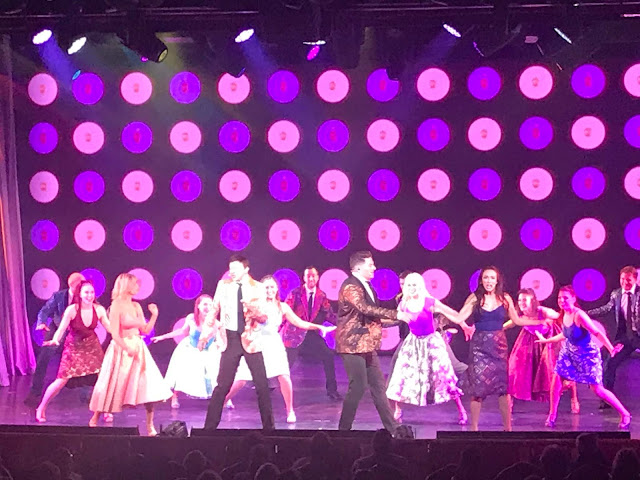 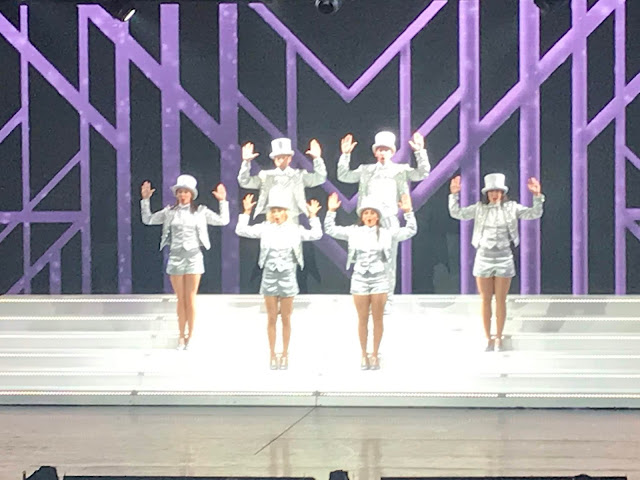 There was a group of 60 Indian-Americans among 2700 fellow passengers on board. Yasmeen and I know some of them from the San Francisco Bay Area. Princess cruises responded to their significant presence by offering daal, chawal, vegetarian dishes and spicy papad on the menu.

On August 15, the Indians had Independence Day Celebrations on the ship with flag raising and karaoke.

There were also many Indians among Grand Princess's multi-national crew.  Large numbers of Russians, Ukrainians, Hungarians, Latin Americans and Filipinos were some of the more significant nationalities among the crew. The ship's captain was from Italy where Grand Princess was built in 1998 at a cost of $450 million.

Back in San Francisco:

We had smooth sailing as we headed back. Early Saturday morning of August 24 as we woke up, we saw Golden Gate's red and green lights through the fog. We were home again. San Francisco skyline with TransAmerica building and the SalesForce Tower were soon visible as we pulled in to Pier 27 of San Francisco Port where we had left exactly 10 days earlier.

Alaska's fresh clean air, natural beauty and cool temperatures were great for our summer vacation. With the exception of one rough right as we sailed to Victoria, it was smooth sailing for the rest of the cruise. It was worth every penny we spent on it.

Pakistani American to Pakistani Diaspora: Go Back and Visit Pakistan

Great summary of the trip. Took us back to ours in 2013 which started out from Vancouver and docked at Anchorage. We brought our girls with us.

Glad you had a great time. Ours was a Princess cruise too.

Riaz Bhai - we took the same cruise from July 5th
Thru the 15 th from SF also on the Grand Princess
But our stops were Ketchikan, Haines , Juneau
& Victoria ( BC )........ we had a fantastic trip &
Were lucky with no rains or rough seas during our 10 day
Trip - I would recommend this cruise to anyone
Especially those Who have never been to Alaska before-
We also met many on our cruise that have taken
These cruises to Alaska about 3-4 times to date