"Do your fasting, pay zakat (charitable donations) and serve your parents, but do these things by the light of legal electricity." Peshawar Electric Supply Company (PESCO)


Peshawar's electric utility has published full page advertisements in major Peshawar newspapers to appeal to its customers' religiosity in the holy month of Ramadan to stop stealing electricity and pay their bills.

According to news reports, PESCO ads exhort the local power consumers to do the right thing by citing religious edicts as follows: "Clerics have ruled that doing good deeds by the light of stolen electricity is against sharia, so let us stop using stolen electricity and beautify our day of judgement."

A combination of deadbeats and power thieves brazenly flout the law by not paying for electricity they use. Many of them are often politically powerful or connected to political bosses who protect them from the law. Some even shamelessly assert their right to steal electricity and refuse to pay bills. The state-owned power companies' employees are often corrupt and complicit in perpetuating the problem which is hurting the entire country. As a result, Pakistan's power sector and its fuel supply chain have been crippled by years of underinvestment, leaving people to endure blackouts of up to 20 hours a day in scorching summer heat.

The problem is widespread. It may be bigger in Peshawar but it is certainly not limited to any one particular city or province. In Islamabad, the nation's capital, it's fairly common for people living in large luxury homes to bribe corrupt utility officials to cap their monthly bills to just Rs. 1000 ($10) regardless of how much electricity they consume.  It's a key reason for Pakistan's worsening energy crisis. By some estimates, more than 40% of the power generated in Pakistan is not paid for. 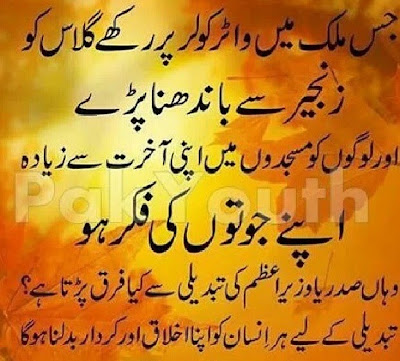 It can be argued that the power theft is just one manifestation of the fraying moral fiber that is responsible for much of what is wrong in a country where religious fervor has been on the rise particularly since 1980s. Pakistan has rapidly climbed Transparency International's corruption rankings with more and more Pakistanis wearing religion on their sleeves. Symbols of religiosity like beards and hijabs are far more common in Pakistan now than I ever saw when I was growing up in the country in 1960s and 1970s.  Violence against fellow Muslims has also grown along with increasing religiosity. Huqooq-ul-Ibad have been almost completely ignored as Huqooq-ul-Allah have dominated religious discourse in the country.

KESC (Karachi Electric Supply Corporation), Pakistan's largest city Karachi's privately held utility, has started to reward those who pay and punish those who don't. It's a collective reward and punishment scheme to deal with the problem in Karachi. Areas where there is 80% money recovery see almost zero load shedding, 70% get a couple of hours of power cuts and those with less than 50% endure very long hours of black-outs. This policy has helped KESC reduce power theft from about 40% a few years ago to about 28% now  It has also resulted in about 50% of Karachi being supplied uninterrupted power.

There are many steps the new government can take to reduce power theft and improve revenue collection in the power sector. Here are a few of them:

1. Lead by example. All government ministers, top officials and members of national and provincial legislatures should pay their bills.

2. Implement the KESC's Karachi policy in more cities and towns to show consumers the benefits of paying for electricity by rewarding those who pay and punishing those who don't.

4. Appeal to people's deep religiosity to fulfill their obligations of paying for what they use. Encourage mosque leaders such as imams and khatibs to reinforce the message through their daily and weekly sermons.

5. Enforce the law. Cut off power to the delinquent consumers. Use police and paramilitary forces to remove kundas, illegal hooks slung over power lines to steal electricity in broad day light.

There is little hope of fixing the worsening crisis without strong action to improve the finances of the power sector to attract more investment.

Twin Shortages of Gas and Electricity

That was hilarious. Good one!

If "deeply religious" people are extremely dishonest, what makes you think religion can possibly find a solution to the problem.

To put this another way, OBSERVE that each person keeps his own house clean, but thinks nothing of throwing garbage on to the common streets. It is the same way with honesty in Pakistan. Everyone is honest with friends, family, associates et cetera. But that honesty evaporates when it comes to dealing with the system at large.

Do you see what I mean?

HWJ: "they perceive Pakistan at large to be "murtad" of "kafir", and so they have no sense of religious obligations to Pakistanis at large."

Honesty and Huqooq-ul-Ibad in Islam apply equally to dealings with all human beings regardless of their religious beliefs.

Very creative, out of the shoe box. Pashtoon are known for doing remarkable things, I hope they are the next revolution!

Here's a pv magazine report of a local NGO working to light up Pakistani villagers' homes:

Working with local and international partners like Coca-Cola, China Mobile's Zong, the Imran Khan Foundation and Engro Corporation, Pakistan's Buksh Foundation has set a goal of illuminating 4,000 off-grid villages by 2017.


Pakistani village Chak 113
The village of Chak 113, in Punjab's Sahiwal District, installs its new lantern charging station.
Buksh Foundation
As part of a pilot project to increase the use of solar power, the Lahore-based microfinance institute Buksh Foundation and the Energy and Resources Institute (TERI) in India, working with national and international partners, have electrified 72 off-grid villages in Pakistan's Punjab province.

The Buksh Foundation, launched in 2009 by Pakistani retail giant Buksh Group, has sought to increase financial inclusion for rural and peri-urban population.

The organization has launched a unique solar energy access model, Lighting a Million Lives, which aims to provide energy access to rural un-electrified areas of Pakistan.

"Under this project, 72 villages in the districts of Sahiwal, Mianwali,
Lodhran, Dera Ghazi Khan, Dera Ismail Khan, Bahawalpur and Chiniot have already been electrified, with 70 more in the pipeline for this month, further reaching out into Mardan, Khushab, Gujrat, Kasur and Bahawalnagar in a period of only six month," Anam Elahi, the Buksh Foundation's business development manager and head of the Lighting a Million Lives project, told pv magazine.

The project has already impacted some 25,000 people and the Buksh Foundation is planning to light a total of 4,000 Pakistani villages, directly helping a million individuals, in the next three years. Recently scheduled projects include electrifying the villages in the northwestern province of Khyber Pakhtunkhwa.

"The project with its multifold benefit model, has not only helped in providing a sustainable energy alternative, but has also encouraged female empowerment, increased economic capacity of the rural areas, created literacy about the needs for environmental friendly energy alternatives and the benefits they provide," said Buksh Foundation CEO Fiza Farhan.

The initiative seeks to empower females in rural communities by putting them in charge of photovoltaic charging stations, which are used to charge lanterns during the day. The women then either sell or rent the lanterns to villages for PKR 4 (€0.03) a day, providing a much cheaper alternative to high-priced kerosene traditionally used for lighting.

Each solar lantern replaces about 500-600 liters of kerosene during its 10-year lifespan, mitigating about 1.5 tonnes of CO2, according to the Buksh Foundation.

The organization said that about 43% of the population of Pakistan lives without access to electricity, of which 70% live in rural areas in 50,000 villages, completely detached from the national electricity grid. By 2015, the figure is expected to climb to 46% as the energy deficit worsens; by 2025, it will rise to 64%, with 187 million people having no access to the power grid.

By reaching its goal of providing a million lanterns to people the Foundation said it could reduce 1.5 million tons of CO2, save around PKR 25 billion (€188 million) and reduce oil imports by 6% a year....