Beer photo ops are an important part of Obama v. Romney race, a historic presidential contest with no WASP candidate. Neither Obama-Biden nor Romney-Ryan are White Anglo-Saxon Protestants, or WASPS, who have dominated America's top leadership throughout American history. Mitt Romney is Mormon and a teetotaler and Obama is Protestant. 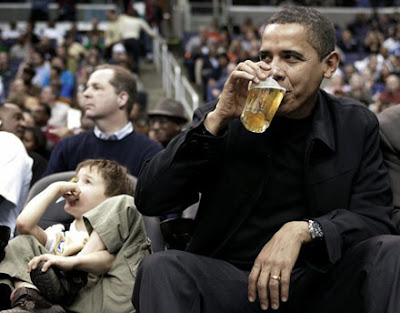 In fact, polls show that President Barack Obama is incorrectly thought to be Muslim by one in six American voters, and only one quarter of voters can correctly identify him as a Protestant. Over 60 percent of Republican voters know that Mitt Romney is Mormon. Less than half of Catholic and Democratic voters know this. Joe Biden and Paul Ryan, the VP candidates, are both Catholic.

What's beer got to do with it? It seems the Obama campaign knows that the American voters have long identified with a candidate in polls as someone with whom they’d prefer to drink a beer. Recently, Obama has been shown drinking beer with voters at the Iowa State Fair. Earlier he did the same at a campaign stop in Ohio. Drinking beer with voters helps Obama differentiate himself from Mitt Romney who, as a practicing Mormon, does not drink beer or any other alcoholic beverage. As a bonus, beer photo ops might also help Obama distance himself from Islam and Muslims to increase his appeal to the "working class white" voters, an important constituency in presidential elections.

As to the absence of a WASP from the top of the tickets, it's symptomatic of  power shift happening at the top. The percentage of Protestants in Congress has dropped to 55% from 74% in 1961, according to Pew Forum. Jews now account for 7% of the US Congress overall and 12% of the US Senate. The corner offices of the top banks, once ruled by Rockefellers and Bakers, now include dozens of Jews, an Indian-American and the grandson of a Greek immigrant, according to Wall Street Journal. There are no WASP judges on the US Supreme Court bench. Three of the top judges are Jews. The remaining 6 are Catholics.

It would be wrong to assume, however,  that the power of America's WASP establishment is nearing an end, just as it was a mistake to expect Obama's election to presidency as the beginning of post-racial America.

So What if Obama is Muslim?

Obama Shies Away From Muslims

Jewish Power in US Congress
Posted by Riaz Haq at 6:43 PM

In his case, however, most of those (Ryan's) ideas appear to come from works of fiction, specifically Ayn Rand’s novel “Atlas Shrugged.”

For those who somehow missed it when growing up, “Atlas Shrugged” is a fantasy in which the world’s productive people — the “job creators,” if you like — withdraw their services from an ungrateful society. The novel’s centerpiece is a 64-page speech by John Galt, the angry elite’s ringleader; even Friedrich Hayek admitted that he never made it through that part. Yet the book is a perennial favorite among adolescent boys. Most boys eventually outgrow it. Some, however, remain devotees for life.

And Mr. Ryan is one of those devotees. True, in recent years, he has tried to downplay his Randism, calling it an “urban legend.” It’s not hard to see why: Rand’s fervent atheism — not to mention her declaration that “abortion is a moral right” — isn’t what the G.O.P. base wants to hear.

But Mr. Ryan is being disingenuous. In 2005, he told the Atlas Society, which is devoted to promoting Rand’s ideas, that she inspired his political career: “If I had to credit one thinker, one person, it would be Ayn Rand.” He also declared that Rand’s work was required reading for his staff and interns.

And the Ryan fiscal program clearly reflects Randian notions. As I documented in my last column, Mr. Ryan’s reputation for being serious about the budget deficit is completely undeserved; his policies would actually increase the deficit. But he is deadly serious about cutting taxes on the rich and slashing aid to the poor, very much in line with Rand’s worship of the successful and contempt for “moochers.”

This last point is important. In pushing for draconian cuts in Medicaid, food stamps and other programs that aid the needy, Mr. Ryan isn’t just looking for ways to save money. He’s also, quite explicitly, trying to make life harder for the poor — for their own good. In March, explaining his cuts in aid for the unfortunate, he declared, “We don’t want to turn the safety net into a hammock that lulls able-bodied people into lives of dependency and complacency, that drains them of their will and their incentive to make the most of their lives.”

Somehow, I doubt that Americans forced to rely on unemployment benefits and food stamps in a depressed economy feel that they’re living in a comfortable hammock.

But wait, there’s more: “Atlas Shrugged” apparently shaped Mr. Ryan’s views on monetary policy, views that he clings to despite having been repeatedly, completely wrong in his predictions.

In early 2011, Mr. Ryan, newly installed as the chairman of the House Budget Committee, gave Ben Bernanke, the Federal Reserve chairman, a hard time over his expansionary policies. Rising commodity prices and long-term interest rates, he asserted, were harbingers of high inflation to come; “There is nothing more insidious that a country can do to its citizens,” he intoned, “than debase its currency.”

Since then, inflation has remained quiescent while long-term rates have plunged — and the U.S. economy would surely be in much worse shape than it is if Mr. Bernanke had allowed himself to be bullied into monetary tightening. But Mr. Ryan seems undaunted in his monetary views. Why?

Well, it’s right there in that 2005 speech to the Atlas Society, in which he declared that he always goes back to “Francisco d’Anconia’s speech on money” when thinking about monetary policy. Who? Never mind. That speech (which clocks in at a mere 23 paragraphs) is a case of hard-money obsession gone ballistic. Not only does the character in question, a Galt sidekick, call for a return to the gold standard, he denounces the notion of paper money and demands a return to gold coins.

Here's an excerpt of Pankaj Mishra's review of Civilisation: The West and the Rest by Niall Ferguson:

‘Civilisation’s going to pieces,’ Tom Buchanan, the Yale-educated millionaire, abruptly informs Nick Carraway in The Great Gatsby. ‘I’ve gotten to be a terrible pessimist about things. Have you read The Rise of the Colored Empires by this man Goddard? … The idea is if we don’t look out the white race will be – will be utterly submerged.’ ‘Tom’s getting very profound,’ his wife Daisy remarks. Buchanan carries on: ‘This fellow has worked out the whole thing. It’s up to us, who are the dominant race, to watch out or these other races will have control of things.’ ‘We’ve got to beat them down,’ Daisy whispers with a wink at Nick. But there’s no stopping Buchanan. ‘And we’ve produced all the things that go to make civilisation – oh, science and art, and all that. Do you see?’-------------

Scott Fitzgerald based Goddard, at least partly, on Theodore Lothrop Stoddard, the author of the bestseller The Rising Tide of Color against White World Supremacy (1920). Stoddard’s fame was a sign of his times, of the overheated racial climate of the early 20th century, in which the Yellow Peril seemed real, the Ku Klux Klan had re-emerged, and Theodore Roosevelt worried loudly about ‘race-suicide’. In 1917, justifying his reluctance to involve the United States in the European war, Woodrow Wilson told his secretary of state that ‘white civilisation and its domination over the world rested largely on our ability to keep this country intact.’

Hysteria about ‘white civilisation’ gripped America after Europe’s self-mutilation in the First World War had encouraged political assertiveness among subjugated peoples from Egypt to China. Unlike other popular racists, who parsed the differences between Nordic and Latin peoples, Stoddard proposed a straightforward division of the world into white and coloured races. He also invested early in Islamophobia, arguing in The New World of Islam (1921) that Muslims posed a sinister threat to a hopelessly fractious and confused West. Like many respectable eugenicists of his time, Stoddard later found much to like about the Nazis, which marked him out for instant superannuation following the exposure of Nazi crimes in 1945.
--------
It is hard, even with Google, to keep up with Ferguson’s many claims and counter-claims. But his announcements of the dawning of the ‘Chinese Century’ and his more recent revised prophecy that India will outpace China, can be found as quickly as the boisterous heralding of the American imperium that he now disavows. As for his views on the innate superiority, indeed indispensability, of Western civilisation, these can be easily ascertained from his published writings and statements. Here is an extract from an interview early this year in the Guardian justifying the conquest of Native Americans:

The Apache and the Navajo had all sorts of admirable traits. In the absence of literacy we don’t know what they were because they didn’t write them down. We do know they killed a hell of a lot of bison. But had they been left to their own devices, I don’t think we’d have anything remotely resembling the civilisation we’ve had in North America.

It says something about the political culture of our age that Ferguson has got away with this disgraced worldview for as long as he has. Certainly, it now needs to be scrutinised in places other than the letters page of the LRB.