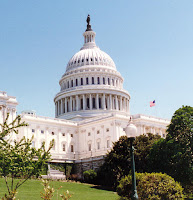 With Washington on an unprecedented spending spree to stimulate the economy, President Barack Obama has repeatedly promised unprecedented transparency. "Instead of politicians doling out money behind closed doors, the important decisions about where taxpayer dollars are invested will be yours to scrutinize," the President said in a video announcing the opening of the site called recovery.gov.

While polls indicate that most Americans support their new president in his sincere efforts to revive the US economy, it is clear that President Obama is up against the massive power of Washington's corrupt political-industrial elite that has brought American economy near collapse. And many of the same people are still in charge on the Hill.

As the stimulus package is getting the nod from the US Congress, the lobbyists on K-street say that their phones are ringing off the hook. "There was this unique opportunity that government was handing out money and anytime that happens, companies will spend what they must to get in line to get a piece of the pie", said Sheila Krumholz, Executive Director of Center for Responsive Politics in a report aired on NPR Radio today.

Washington lobbyists earned a whopping $3.2 billion last year. That's the highest amount in the decade tracked by the nonpartisan watchdog group's Sheila Krumholz. She said interest groups spent $17.4 million on lobbying every day Congress was in session last year. And with Washington on a spending spree, companies are boosting their influence on Capitol Hill.

The situation is no different on Wall Street, one of the largest contributors to the powerful politicians in America. Despite crippling losses, multibillion-dollar bailouts and the passing of some of the most prominent names in the business, employees at financial companies in New York, the now-diminished world capital of capital, collected an estimated $18.4 billion in bonuses for the year, according to a recent report in the New York Times.

That was the sixth-largest haul on record, according to a report released Wednesday by the New York State comptroller.

Massive loss of confidence in many of the US public and private institutions is largely responsible for the current global economic crisis of historic proportions. It is in the best interest of America's political-industrial elite to reform themselves in the larger interest of the nation and the world. I hope our new popular new president can get the people on the Hill as well as those on Wall Street and K Street to behave themselves in their own best interest. To accomplish this challenging task, Obama should be willing to risk going directly to the people, over the heads of the Congressmen, including his fellow Democrats, early and often to maintain his own credibility with the people.

Senator Schumer: The Champion of Wall Street on the Hill

Pay to Play is the Name of the Game in Washington

Are Jews Culprits of Collapse on Wall Street?

Jewish Network in US Congress

Obama warned his opponents in his Sat address today that he is ready for a fight to get his budget and priorities approved:

“I know these steps won’t sit well with the special interests and lobbyists who are invested in the old way of doing business, and I know they’re gearing up for a fight as we speak,” Obama said in his weekly radio address Saturday.