Pay-to-Play is the Norm in Washington 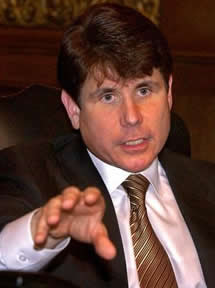 “This town (Washington) is full of people who call themselves ambassadors, and all they did was pay $200,000 or $300,000 to the Republican or Democratic Party,” says the well-known criminal defense lawyer Robert Bennett, referring to a passage in the criminal complaint filed against the Illinois governor suggesting that Mr. Blagojevich was interested in an ambassadorial appointment in return for the Senate seat. “You have to wonder, How much of this guy’s problem was his language, rather than what he really did?” Gov Blagojevich was reportedly wire-tapped by the FBI as saying, "I've got this thing (the senate seat) and it's f------ golden, and uh, uh, I'm just not giving it up for f------ nothing."

Patrick Fitzgerald, the US prosecutor who has charged Gov Blagojevich, believes that the governor has crossed the line between political horsetrading and corruption. “We’re not trying to criminalize people making political horse trades on policies or that sort of thing,” Mr. Fitzgerald said. “But it is criminal when people are doing it for their personal enrichment. And they’re doing it in a way that is, in this case, clearly criminal.”

It seems to me that political campaign contributions routinely buy favors such as favorable legislative votes or policy decisions or significant political appointments by elected officials. However, this is done in a manner that avoids the explicit mention of quid pro quo in any conversations or writings. A nod and a wink is often sufficient for such a transaction to keep the prosecutors away. If what the prosecutors claim Balgojevich did is proven in a jury trial as criminal violations of the law, it would be because of how Blagojevich chose to do it rather than the substance of what he really did.

As the recent CBS 60 Minutes segment explained, "In retrospect, giving Wall Street immunity from state gambling laws and legalizing activity that had been banned for most of the 20th century should have given lawmakers pause, but on the last day and the last vote of the lame duck 106th Congress, Wall Street got what it wanted when the Senate passed the bill unanimously." Though CNN has only picked Senator Phil Gramm as one its top 10 Culprits of Collapse, the entire senate is responsible for it.

Political corruption in Washington is believed to be the root cause of the current international financial crisis, the worst since the Great Depression that started in 1929 and lasted through the 1930s. Clearly, the unanimous Senate passage of the Commodity Futures Modernization Act of 2000 demonstrated the power of Wall Street over both Republicans and Democrats. In fact, the data of the financial services industry's recent campaign contributions shows that two of the top three recipients of the largess from Wall street are Democrats Barack Obama and Hilary Clinton. John McCain is in a distant third position. Overall, Sen Obama's campaign is awash with record, massive cash contributions.

Since the current financial crisis has its roots in easy, plentiful mortgages and the housing bubble facilitated by the Democrats' unabashed and reckless support for home ownership via Fannie and Freddie and community re-investment legislation, a larger share of the blame for the current crisis should be assigned to the Congressional Democrats such as Barny Frank and Chris Dodd. Both Fannie and Freddie have been major campaign contributors to key politicians in Washington.

If Blagojevich is convicted and jailed, it would simply offer a lesson for other politicians to be wiser about how they exchange favors for campaign money rather than deter them from engaging in the rampant pay-to-play political corruption in America. As far as campaign money is concerned, the rules for how it can be used by politicians are loose enough that it amounts to personal enrichment for maintaining power and expensive lifestyles. If the Blagojevich case goes to trial, it may help bring the spotlight on the culture of political corruption in America.

In terms of government corruption, the US is currently ranked at number 20 on a list of 179 nations by Transparency International, worse than most of the countries of Western Europe and Japan. If the American politicians' common practices are redefined as criminal rather than mere political horse trades, then the US corruption ranking will likely slip further.

Here's a video clip on US campaign contributions:

Here's an Op Ed by Prof Anatol Lieven published in the Guardian:

If Pakistan's chief justice, Iftikhar Chaudhry, manages to press his charges of corruption against the president, Asif Ali Zardari, he will bring down the existing Pakistani government. If he extends his anti-corruption campaign to the political elites as a whole, he will bring down the entire existing political system – and replace it, his critics say, with a dictatorship made up of an unelected (and equally corrupt) judiciary.
----------
The truth is that Pakistani politics revolves in large part around politicians' extraction of resources from the state by means of corruption, and their distribution to those politicians' followers through patronage. Radically changing this would mean gutting the existing Pakistani political system like a fish. Nor is it at all certain how popular the process would really be with most Pakistanis.

For while the greater part of this process of extraction and redistribution is illegal according to Pakistani law, how much of it is immoral in Pakistani culture is a much more complicated question. Every Pakistani politician accuses his rivals of corruption but, equally, the perception that he himself is "generous" and "honourable" to his own supporters is likely to be central to his own local prestige. If a public monument is ever erected to the Ideal Pakistani Politician, the motto "He dunks but he splashes", originally coined by Mayor Richard Daley of Chicago, should be inscribed on its pedestal.

And this is not just a matter of cynical politics. It also obeys a fundamental moral imperative of local culture to be loyal to one's followers and, above all, one's kinfolk. The politician who is really despised is the kleptocrat who both steals immoderately and does not share the proceeds. As a result, a good deal of the proceeds of corruption does get distributed through parts of society, thereby helping to maintain what until recently has been the surprising underlying stability of the Pakistani political system.

The military is widely seen as relatively immune to corruption, and when it comes to its own internal workings, this is largely true – though it usually ceases to be true when generals go into politics. However, it is vitally important to note that this is in large part because for many decades the military as a whole has acted as a kind of giant patronage network, extracting a huge share of Pakistan's state resources via the defence budget and other concessions, and spending them on itself. Because – to its credit – it has distributed the resulting benefits in an orderly if hierarchical way among its generals, officers, non-commissioned officers and even to a degree privates, it has managed to keep a lid on corruption within the military itself. However, a belief is growing among ordinary soldiers, not just that the generals' perks are immoderate but that in some cases their families are using their connections to make huge corrupt fortunes outside the military.

As for Zardari, it seems highly doubtful that he can hang on much longer. The chief justice is pursuing him with bulldog determination and the letter of the law is on his side. The military has been infuriated by what it believes are his attempts to ally with Washington against it. It does not want another military government, but it does want a civilian regime that is much more responsive to its wishes. And the opposition want him out before, not after, senate elections that might just enable him to cling to the presidency even if as expected his Pakistan People's party is defeated in general elections due by early 2013. Whether getting rid of Zardari will fundamentally change Pakistani politics, however, is a very different matter.