Only 20,918 refugees have so far been admitted to the US in fiscal year 2018, despite the cap being set at 45,000. Of those admitted, Muslim refugees have been hit the hardest with their share dropping to 14.5%, the lowest since 2001. At the same time, the Christian refugees share rose to nearly 71%, the highest since 2001, according to data compiled by United Nations High Commission for Refugees (UNHCR). This data provides incontrovertible evidence of U.S. President Donald J. Trump's Islamophobia and xenophobia. 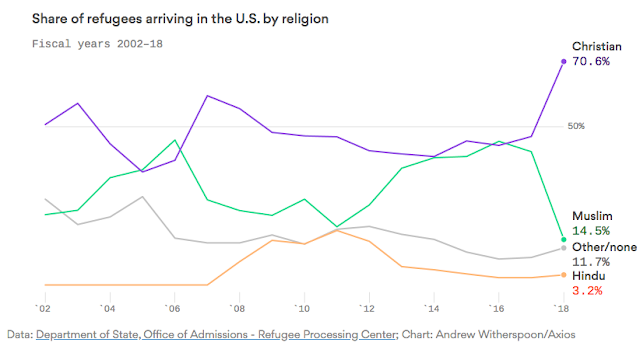 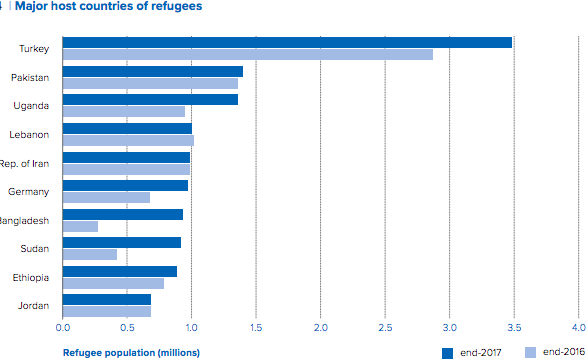 Myanmar: A majority of Muslim refugees accepted into the U.S. in FY 2018 have come from Myanmar, where thousands of Muslim-majority Rohingya have been killed in an ethnic cleansing and hundreds of thousands have fled.

Somalia: The number of refugees admitted from the Muslim-majority, African nation of Somalia has dropped by 96% compared to last fiscal year. For no known reasons, the White House expressed particular concern over allowing refugees from Somalia into the U.S., former chief of the refugee affairs division at USCIS Barbara Stack told Zoe Chace in the latest episode of This American Life.

The year of Islamophobia began in earnest on January 20, 2017 with the inauguration of President Donald J. Trump who called for "total and complete shutdown" of  Muslims entering the United States during his successful electoral campaign. Among the first executive orders he signed was a "Muslim Ban" from seven predominantly Muslim countries.

Trump closed the year with recognition of Jerusalem as Israel's capital, a recognition that prior US administrations had withheld pending negotiations and final settlement of the issues between Israelis and Palestinians.

Only 20,918 refugees have so far been admitted to the U.S., despite the cap being set at 45,000 for fiscal year 2018. Of those admitted, Muslim refugees have been hit the hardest with their share dropping to 14.5% while the Christian refugees share rose to nearly 71%, according to data compiled by United Nations High Commission for Refugees (UNHCR). This data provides incontrovertible evidence of U.S. President Donald J. Trump's Islamophobia and xenophobia. The simultaneous rise of Neo Nazis in the West and the Hindu Nazis in India represents a very serious and growing threat to world peace. Their combined menace can lead to further global instability and increased violence if these trends are not halted and reversed soon. I hope good sense prevails among the voters in these countries to pull the world back from the brink of human catastrophe.

A Conversation With White Nationalist Jared Taylor on Race in America

Lynchistan: India is the Lynching Capital of the World

Hindutva: The Legacy of the British Raj

#Trump tweets #socialdistancing enforced differently at mosques & churches. #Muslims calls remarks "insulting and frustrating on the eve of Ramadan … our president chooses to use his energy and platform to amplify the hateful words" of the original tweet."https://www.cnn.com/world/live-news/coronavirus-pandemic-04-18-20-intl/index.html

President Donald Trump said Saturday that there "could be a difference” in how authorities enforce social distancing guidelines at mosques versus how they do at churches.

This was in a response to a question regarding a post by conservative author and political commentator Paul E. Sperry he retweeted today.


Farhana Khera, executive director of Muslim Advocates, called Trump’s remarks "insulting and frustrating on the eve of Ramadan … our president chooses to use his energy and platform to amplify the hateful words" of the original tweet."

"As is often the case, the President is yet again stoking anti-Muslim hate and sowing division at a time when he is failing to do his job," Khera said.

Asked if he thought mosques might not follow the social distancing guidelines, Trump responded, "I don't think that at all. I'm somebody who believes in faith. It matters not what your faith is. But politicians treat different faiths differently. I don't know what happened with our country. But the Christian faith is treated much differently than it was, and I think it's treated unfairly."

The retweet ignores the fact that President Trump is pushing for states to ease social distancing guidelines if they are ready to do so, and for weeks has been pushing for some of those restrictions to be lifted by May 1. Ramadan will be observed between April 23 and May 23 this year.

In the U.S. and Western Europe, people say they accept Muslims, but opinions are divided on Islam
BY NEHA SAHGAL AND BESHEER MOHAMED


At the same time, there is no consensus on whether Islam fits into these societies. Across Western Europe, people are split on Islam’s compatibility with their country’s culture and values, according to a 2017 Pew Research Center survey. And in the U.S., public opinion remains about evenly divided on whether Islam is part of mainstream American society and if Islam is compatible with democracy, according to a 2017 poll.

Surveys in both the U.S. and Western Europe were conducted on the telephone, and due to the tendency of some respondents to give socially acceptable responses, may overstate the share of people willing to accept others (also known as social desirability bias).

In both the U.S. and Europe, the surveys find higher acceptance of Muslims among those with more education. In the U.S., for example, 86% of adults with a college degree would be willing to accept a Muslim into their family; among Americans without a college degree, this share falls to 75%. Similarly, in Germany, a majority of those with a college education (67%) say they would be willing to accept a Muslim in their family, compared with roughly half (52%) among those without one. The same pattern is present in other countries, such as the UK (71% vs. 44%) and Austria (67% vs. 51%).

On both sides of the Atlantic, attitudes toward Muslims are tied to politics, even after taking education, age and other demographic factors into account. In Western Europe, those who lean toward the right of the European political spectrum have less accepting views than those who lean toward the left. Likewise, in the U.S., those who identify with or lean toward the Democratic Party are more likely than Republicans and Republican leaners to say they would be willing to accept a Muslim family member (88% vs. 67%). Still, majorities among both Democrats and Republicans say they would be willing to accept Muslims in their lives. Additional analysis of how other demographic factors (such as religion) are correlated with these kinds of attitudes in Europe can be found here.