President Donald Trump's first new year tweet in 2018 accused Pakistan of "nothing but lies and deceit". This is not new.  Back in 2011, then Secretary of Defense Robert Gates in a US Senate Hearing was asked by Senator Patrick Leahy about Pakistan's "lies" to the United States. 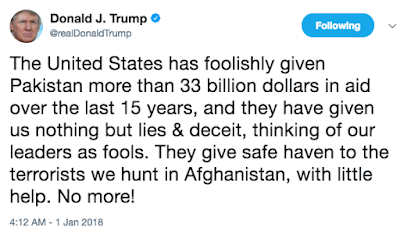 Here's how the exchange went:

SENATOR PATRICK LEAHY: How long do we support governments that lie to us? When do we say enough is enough?

SEC ROBERT GATES: Well, first of all, I would say, based on 27 years in CIA and four and a half years in this job, most governments lie to each other. That's the way business gets done.

LEAHY: Do they also arrest the people that help us when they say they're allies?

GATES: And -- and sometimes they send people to spy on us, and they're our close allies. So...

LEAHY: And we give aid to them.

GATES: ... that's the real world that we deal with.

Is the United States always truthful with all its allies? Is President Donald Trump a paragon of virtue when it comes to telling the truth?

Will Pakistan Yield to Trump's Pressure?

Robert Gates' Straight Talk on Pakistan
Posted by Riaz Haq at 10:51 AM

Most Americans, not to mention Pakistanis too, don't understand the nuances of the highly competitive international relations. Given that context, I often remind Americans that the total US aid to all the countries barely amount to 1% of the US budget.

Is Pakistan Willing to Lose America?
By MOSHARRAF ZAIDI AUG. 29, 2017

For the past 16 years, whenever the United States has been faced with the reality of a failing war in Afghanistan, it has blamed Pakistan. Efforts to bring freedom to the valleys of Afghanistan, this narrative claims, have been thwarted by a double-dealing “ally” that takes American aid while supporting its enemies.

The narrative inadvertently casts American presidents, generals, diplomats, spies and others who have been part of the war effort as credulous dupes and casts poor light on the American military, stuck in a quagmire despite having the world’s most advanced weapons and largest financial resources. It also assumes that Pakistan has a clear interest in harming both the United States and Afghanistan.

Those assumptions are wrong.

Pakistan joined President George W. Bush’s war on terrorism reluctantly but proved itself an effective ally in the fight against Al Qaeda and helped decimate its ranks. That contribution was sullied by Pakistan’s failure to locate Osama bin Laden in Abbottabad.

After the Sept. 11 attacks, the United States established a partnership with Pakistan over a decade and a half — handing out substantial amounts of aid, sophisticated weapons and the status of major non-NATO ally. Pakistan continues to require American military hardware, and middle-class Pakistani children continue to dream of attending American universities and of working on Wall Street. The United States is the biggest market for Pakistani exports, and Pakistani-Americans form its seventh-largest diaspora group.

China’s rising global status, and its explicit push for regional influence, has reduced Pakistan’s dependence on the United States, but the rumors of the demise of America’s importance in Pakistan are greatly exaggerated.


Despite these factors, neither the United States nor Pakistan has gained all that it would like from the relationship. Pakistan has not been able to convince the United States of the validity of its primary interest in Afghanistan — preventing it from becoming a “proxy for India” and stemming fears of “encirclement” in Pakistan despite India’s proclamations of merely offering economic assistance to Afghanistan.

Afghanistan’s leaders have recently taken to brazenly welcoming an ever-increasing Indian footprint in Kabul and beyond. Pakistani hawks used to be merely suspicious of collusion between the most anti-Pakistan Afghans and the Indian establishment. In the past two years, that suspicion has turned into conviction.

For its part, the United States has failed to convince Pakistan of the urgency of its primary interest in Afghanistan — shutting down the Haqqani network, the principal planner and executor of the most lethal terrorist attacks in Afghanistan over the past decade. Pakistanis have hemmed and hawed, offering up low-level Haqqani operatives and occasionally trimming the space available to them.

Until Americans learn how to have an honest conversation with India about what Pakistan sees as its proxy warfare in Afghanistan and its brutal occupation of Kashmir, no amount of threats to Pakistan will help. Countries can be weaned from many things, but not from protecting themselves. Pakistan is definitely a problem in Afghanistan, but it is a problem of America’s making.

Here's part of Gen Petraeus' response: "I looked very very hard then (as US commander in Afghanistan) and again as CIA director at the nature of the relationship between the various (militant) groups in FATA and Baluchistan and the Pakistan Army and the ISI and I was never convinced of what certain journalists have alleged (about ISI support of militant groups in FATA).... I have talked to them (journalists) asked them what their sources are and I have not been able to come to grips with that based on what I know from these different positions (as US commander and CIA director)".

Q: What is India’s role in Afghanistan?

A: It’s nowhere near as significant as Pakistan thinks it is. It has had a long relationship with the Afghan government, and supported Afghanistan when the government was reconstituted in 2001. It’s soft power — roads, hospitals, some military training. They don’t want to … further provoke the paranoia of ISI. As long as we (the United States) are in there fighting the terrorists, they can free-ride on our military commitment.

Q: Your book shows how officers within the ISI have continued to support the Taliban in Afghanistan, despite numerous deadly attacks within Pakistan and on Pakistanis by branches of the Taliban operating there. What is the motivation?

A: The Pakistani officer class — and they are ultimately the directors of the spy service as well — have a proud nationalistic tradition. There’s a conviction that India is under every pillow, that it’s out to destroy Pakistan. Over the years that (belief) has become a rationale for army influence in Pakistani politics … the whole country has moved to the right as the years have gone by.


The practical reason is that Pakistan feels vulnerable to Afghanistan. They share a long and open border, and the people along the border don’t even recognize its legitimacy. The fear is that without a buffer strategy of political influence, that India will use Afghanistan to destabilize Pakistan.

Q: Islam is the state religion of Pakistan — how does religious faith affect the motives of the ISI?


A: It’s a very diverse officer corps. The junior officers are more pious; the senior officers are ardently nationalist, more nationalist than even 20 years ago, given the violence and pressure they have come under. When you talk nationalism you’re talking about a country that was founded on the basis of Islam. I think Americans have always struggled to figure out how personal faith among Pakistani officers may affect their political judgment. The lazy way is to take them out for a drink. That doesn’t work with these guys.

Q: How do you see Afghanistan’s future unfolding?

The Afghan government is stuck. In 40 percent or more of the country’s rural districts, the Taliban are embedded. They are present in other parts of the country where they don’t have ethnic or religious roots … It’s even more complicated, because now all this violence has created an ethnic polarization in the rest of the country, and there’s a constitutional crisis in Kabul that’s been going on for three-and-a-half years.

The (NY Times) newspaper's decision to publish the article, provocatively titled "What We, the Taliban, Want," jolted not only ordinary readers and US foreign policy hawks, but also Washington's biggest detractors abroad. As the criticism mounted, The Times' opinion editors issued a statement to try and justify their decision to give a platform to Haqqani.

"Our mission at Times Opinion is to tackle big ideas from a range of newsworthy viewpoints," they stated. "We've actively solicited voices from all sides of the Afghanistan conflict, the government, the Taliban and from citizens. Sirajuddin Haqqani is the second in command of the Taliban at a time when its negotiators are hammering out an agreement with American officials in Doha that could result in American troops leaving Afghanistan. That makes his perspective relevant at this particular moment."

What the Times did not mention, however, was the extent to which the Haqqani question has prickled the relationship between the US and Pakistan - a major non-NATO ally historically accused by many in Washington of not doing enough to facilitate American objectives in neighbouring Afghanistan.

Back in 2011, following an attack on the US embassy in Kabul believed to be perpetrated by the Haqqanis, the then chairman of the Joint Chiefs of Staff, Mike Mullen, called the network a "veritable arm" of Pakistan's Inter-Services Intelligence (ISI), ratcheting up pressure on Pakistan to eliminate the network and paving the way for more American drone strikes in the country.

Mullen's assertion caused widespread anger and disappointment in Pakistan. In the years that followed, consecutive civilian governments in Pakistan maintained that the infrastructure supporting the network had shifted to Afghanistan and that scapegoating Pakistan for American failures in an interminable war next door was disingenuous and unjust.

For many in Pakistan, no other political group better exemplifies America's long history of playing sides to suit its own strategic objectives. Few American diplomats today care to recount that the Haqqanis started as Washington's closest allies in Afghanistan; that the network's founder Jalaluddin Haqqani was a CIA darling kept flush with money and weaponry, including shoulder-fired Stinger missiles that would ultimately down Soviet aircraft. Fewer still have any compunction over the diplomatic arm-twisting meted out to Pakistan, including the cutting off of vital Coalition Support Fund aid, for allegedly not doing enough to combat the group.

As the US continued to pressure Pakistan for not doing enough to curtail the Haqqani Network's activities in Afghanistan, the grievances against Washington's regional policies started to pile up in in the country. Many in Pakistan came to believe that the US was scapegoating Islamabad to camouflage the deeper contradictions in its military strategy against the Taliban. And they had ample reason to hold this view. In 2015, for example, the US and the Haqqanis came face-to-face during the ill-fated "Murree talks" between the Taliban and the Afghan government. Conveniently, the US raised no objections to the Haqqanis being in the meeting.

On his recent visit to India, President Trump took a softer line on Pakistan, reflecting the hard work that both sides have put into resuscitating the relationship from its worst days....

For Pakistanis, that alone is a welcome shift, even if an official public apology for taking the flak for the Haqqanis, takes time.