South Asian institutions featuring on this list include 17 from India, 10 from Pakistan and 1 each from Bangladesh and Sri Lanka. The list is topped by Singapore with its National University at #1 and includes Singapore's Nanyang Technical University at #7. It is dominated by 58 universities from China (including 7 in Hong Kong and 1 in Macao), 50 from Japan, 47 from South Korea and 28 from Taiwan. Other nations represented with universities among top 300 in Asia are: Malaysia (17), Thailand (10), Indonesia (9), Philippines (5), Vietnam (3) and Brunei (1). 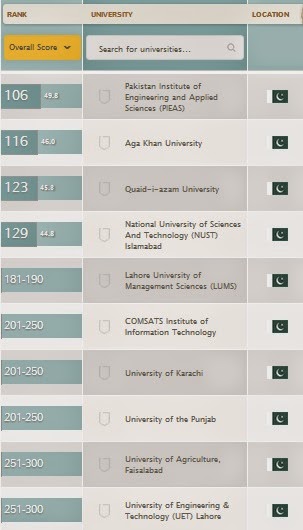 Rise in international rankings of Pakistani universities began during Musharraf years when the annual budget for higher education increased from only Rs 500 million in 2000 to Rs 28 billion in 2008, to lay the foundations of the development of a strong knowledge economy, according to former education minister Dr. Ata ur Rehman. Student enrollment in universities increased from 270,000 to 900,000 and the number of universities and degree awarding institutions increased from 57 in 2000 to 137 by 2008. Government R&D spending jumped seven-fold from 0.1% of GDP in 1999 to 0.7% of GDP in 2007.

Role of Politics in Pakistan Economy

India and Pakistan Compared in 2011

The European Council for Nuclear Research (Cern) has decided to grant Pakistan the status of an associate member.

Pakistan is the first Asian country and third after Turkey and Serbia to have received the associate membership.

The country has a two-decade long history of collaboration with Cern which began with the signing of a Cooperation Agreement in 1994.

Since then, Pakistan has carried out a number of successful projects involving a variety of technical disciplines with sophisticated technologies and precision engineering science, including the manufacture of various equipment and components of Cern’s Large Hadron Collider and associated experiments.

The fact that he (Prof Ramzi Suleiman )is an Israeli Arab drew a positive response from many of the Pakistani scientists, who were interested developments in Israel and the Palestinian Authority and spoke about the importance of cooperation in the field of science. ....Participating in the conference were some 200 physicists and mathematicians from various countries, including China, England, Japan, Switzerland and the U.S., in addition to researchers from a number of Pakistani universities.

Suleiman represented the University of Haifa and Al Quds University, where he teaches.

He focused on the implementation of the proposed theory to understand the dynamic of the universe, including the dynamic of dark energy, black holes in the centers of galaxies and the evolution of chemical elements in the universe.

#India’s climb to world's top 100 #universities not easy, but it can rise. #education https://www.timeshighereducation.com/comment/philip-altbach-indias-passage-might-not-be-simple-but-it-can-climb-to-elite-tier … via @timeshighered

Late last year, India’s president, Pranab Mukherjee, told a conference on industry-academic interaction that if India provides “enough funds to [the] top 10 to 15 institutions for the next four to five years, these institutions will certainly storm into the top 100 of global academic rankings within [the] next few years”. Unfortunately, his optimism is misplaced. That laudable goal will be difficult, if not impossible, to achieve in the short or medium term.

India’s higher education and research sectors have, for decades, been underfunded, especially in view of the tremendous growth in student numbers. Compared with the other BRIC countries, the proportion of Indian gross domestic product spent on education – 4.1 per cent – is second to Brazil. But India is bottom for research expenditure, committing just 0.8 per cent of its GDP, and it educates the lowest proportion of the relevant age group. So despite now having the largest higher education system in the world after China, the public and political clamour for more expansion is immense.

Indian higher education is also poorly organised to create world-class universities. No state government has a vision to do so, and none provides adequate funding to maintain high standards. The central universities are better funded and do not share with the state universities any of the immense, globally unique responsibility for supervising India’s 36,000 colleges. But they are still beset by a range of factors that make institutional change extraordinarily difficult. These include excessive bureaucracy, a promotion system that pays little attention to productivity and the occasional intrusion of local politics on to campus. This explains India’s tendency, when it wants to innovate in the sector, to create new institutions, such as the Indian Institutes of Technology, the Tata Institute of Fundamental Research or the Indian Institutes of Management. But doing this requires time and immense resources – and leaves the vast majority of the system wallowing in mediocrity.

Whatever the approach, creating world-class universities requires careful thought and planning, as well as considerable funding over the long run. India will need to consider whether it has the resources. If recognition in the global rankings is a goal, the challenges are even greater because the rankings are a moving target. There can be only 100 institutions in the top 100, and several other countries, such as Russia, Japan and China, are also spending big on their top universities. India is very much a latecomer to the world-class party.

Jamil Salmi and I analysed the experiences of 10 successful new universities in our 2011 book The Road to Academic Excellence: The Making of World-Class Research Universities. We found that while money is necessary, other elements are just as vital. One is a governance model that involves significant participation from – but not total control by – academics. Another is strong leadership: not only a visionary president but also competent administrative staff able to implement the university’s mission. A third element is enough autonomy to prevent the interference of governmental or private authorities, combined with reasonable accountability to external agencies. A fourth is top academic staff who are committed to the university’s mission (including teaching), paid adequately and provided with appropriate career ladders. Also important are academic freedom, highly qualified and motivated students, and a firm commitment to meritocracy at all levels.
------


Pakistan has around 170 public and private higher education institutions, some of which date back to when the country was first established. Following the establishment of Pakistan as an independent country the government built several universities to provide vital skills to the newly-formed republic, especially in the sciences and engineering. That legacy continues to this day with many universities retaining a focus on science, medicine and technology.

The COMSATS Institute of Information Technology, or CIIT for short, was established in 1994 by the commission on Science and Technology for Sustainable Development in the South, an intergovernmental organisation whose goal is to promote sustainable growth in developing countries through science and technology. CIIT is spread over six campuses with the main campus in the capital city, Islamabad.

Although still a young institution, CIIT has gained a strong reputation in the region for its research and teaching especially in the fields of IT and computer science, and CIIT is highly placed in regional rankings as a result. The Islamabad campus is home to over 5,000 students while around 30,000 more attend classes at CIIT’s satellite campuses in Abbottabad, Attock, Vehari, Lahore, Wah and Sahiwal.

The university offers a wide range of degrees at postgraduate and undergraduate level. Subjects are split into nine departments which between them offer almost 100 degree programs. Teaching at CIIT takes place in English and the comparatively low cost of tuition makes this an attractive option for international students wishing to specialise in information technology or computer science.

National University of Sciences and Technology

The National University of Sciences and Technology (NUST) is a public research university based in Islamabad. The university was founded in 1991 to further the provision of science, technology, engineering and mathematics (STEM) subjects in Pakistan’s higher education system.

The university was founded in collaboration with the military and military and civil educational establishments merged to become NUST. Since its creation, the institution has grown student enrolment and broadened its curriculum to include non-STEM subjects.

NUST consistently performs well in the regional rankings for the quality of its electric engineering department, the university also ranks highly among those from other emerging economies. Students can choose from a wide array of undergraduate, postgraduate and doctoral programs from over 20 departments.

The university has in the region of 15,000 students encompassing many different nationalities. NUST also has close links with a great many international organisations such as Stanford and Caltech in America, the university of Manchester in the UK and the Tokyo Institute of Technology, among many others. The university also collaborates with CERN, Intel and Microsoft in research and training.

Pakistan is a fascinating country with beautiful natural scenery, a rich culture and a complex history.

The country stretches from the shores of the Arabian sea in the south to the towering heights of the Himalayas in the north, and encompasses the Indus River valley, a cradle of human civilization and home to some of the world’s most ancient cultures. Over the millennia the land has been ruled by many different kingdoms, Hindus, Muslims, Mongols, Sikhs, Achaemenids, Mughals and the British have all controlled parts of modern-day Pakistan.

The country today is an ethnic and linguistic patchwork (more than 60 languages are spoken in Pakistan) where the people mirror the incredible diversity of its landscapes and geography.

Pakistan has around 170 public and private higher education institutions, some of which date back to when the country was first established. Following the establishment of Pakistan as an independent country the government built several universities to provide vital skills to the newly-formed republic, especially in the sciences and engineering. That legacy continues to this day with many universities retaining a focus on science, medicine and technology.

Many Pakistani universities actively encourage foreign students to enrol, and large numbers choose to study abroad in Pakistan. Students come from as far afield as Saudi Arabia, Africa and China as well as some from America and Europe. Higher education is delivered in English at all public universities in Pakistan which, combined with the relatively low cost of living, makes studying abroad here an attractive option.

The COMSATS Institute of Information Technology, or CIIT for short, was established in 1994 by the commission on Science and Technology for Sustainable Development in the South, an intergovernmental organisation whose goal is to promote sustainable growth in developing countries through science and technology. CIIT is spread over six campuses with the main campus in the capital city, Islamabad.

National University of Sciences and Technology

The National University of Sciences and Technology (NUST) is a public research university based in Islamabad. The university was founded in 1991 to further the provision of science, technology, engineering and mathematics (STEM) subjects in Pakistan’s higher education system.