Two-day Pakistan Fashion Week 2013 held April 9 and 10 in Karachi  is yet another illustration of the fact that life goes on in Pakistan in spite of the terror and violence that makes daily headlines. It's a testament to Pakistanis' extraordinary resilience and great capacity to take it all stride. Here are a few pictures of Pakistani models wearing the creations of Pakistani designers at the show which concluded on April 10, 2013: 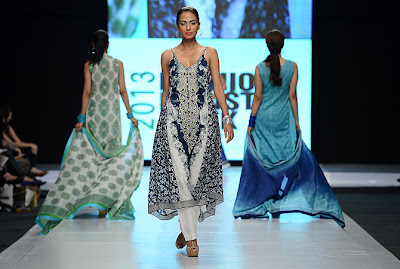 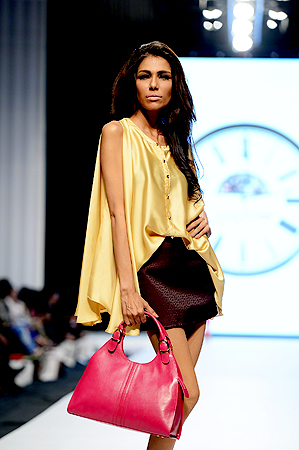 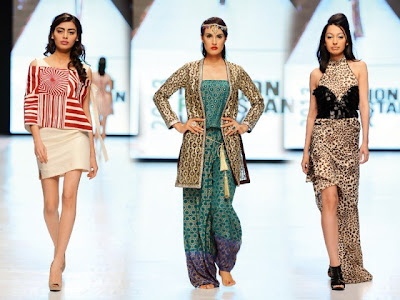 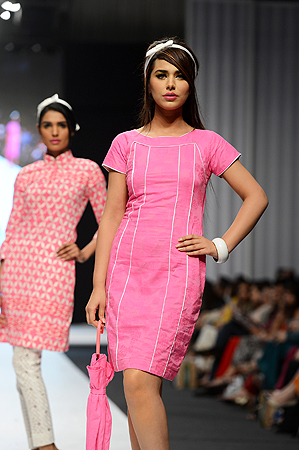 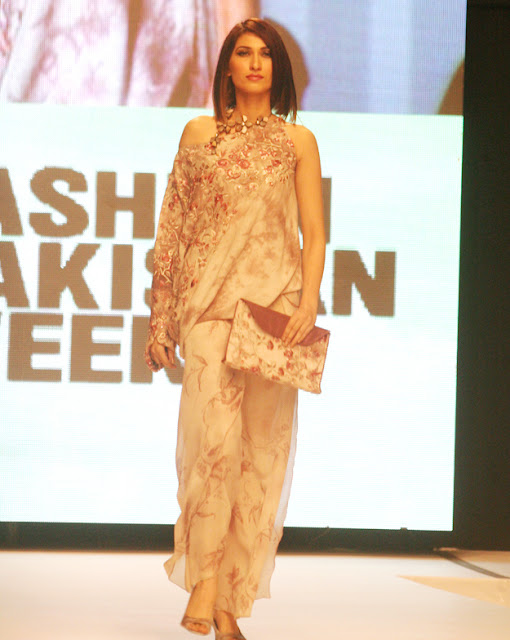 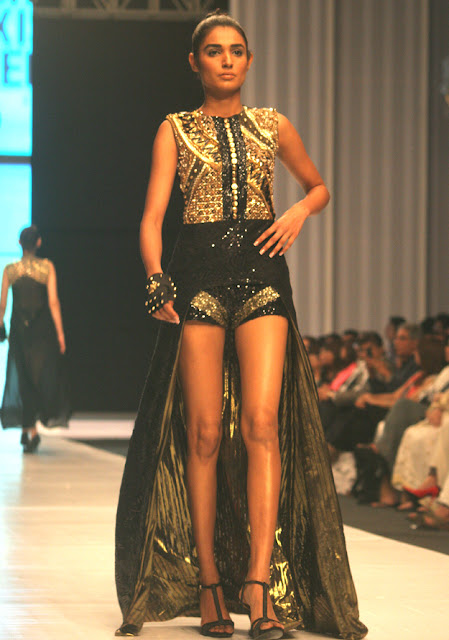 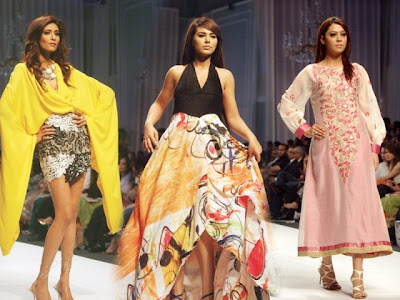 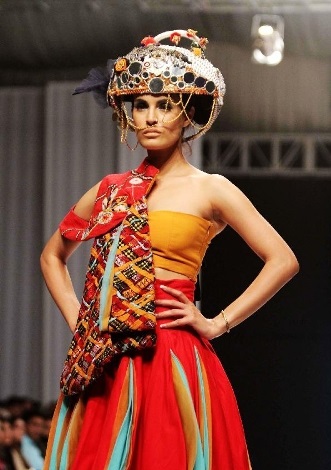 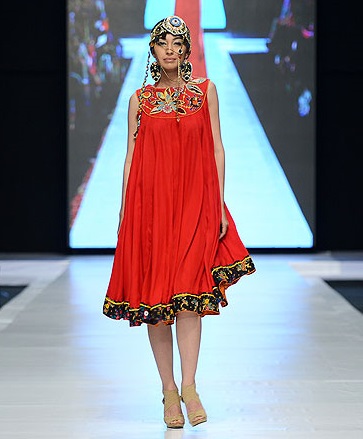 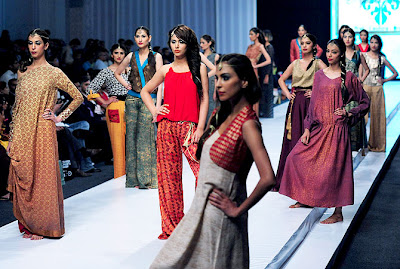 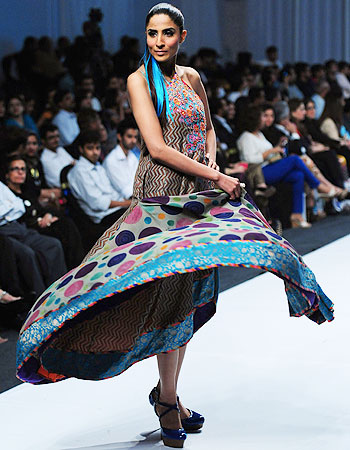 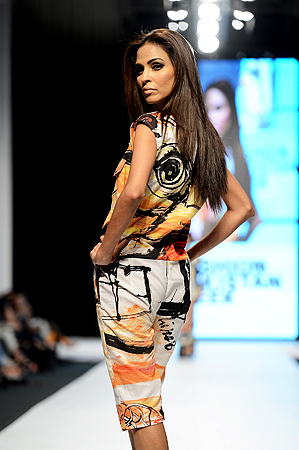 
Dolmen Mall Clifton Featured on CNN from DHAToday on Vimeo.

We Pakistanis are as talented as designers from any other countries.

Here's a BBC report on an effort to challenge negative stereotypes of Pakistan:

A new project is using films made made in London and south Asia in an attempt to promote Pakistan as a land of opportunity rather than a failed state.

Pakistan Calling is linking film students at London Metropolitan University with students in Lahore and Karachi.

It will provide a web-platform for short films documenting positive work going on in Pakistani society.

It is a joint venture between the Royal Society for the encouragement of Arts, Manufactures and Commerce (RSA) and The Samosa, a London-based British Asian website and is funded by these organisations as well as the Foreign and Commonwealth Office.

One of the main aims is to engage the British Pakistani diaspora in social projects "back-home" using skills and examples from the UK.
'Positive picture'

There were more than one million British Pakistanis counted in the 2011 England and Wales census (2% of the population) with the biggest concentration in the capital. Events in Pakistani cities can affect families from Ilford to Bradford.

Matthew Taylor, chief executive of the RSA, says it is vital that there is more to the conversation around Pakistan than extremism and terror.

"It's about trying to present a more positive picture of Pakistan which is far too often portrayed as a place of nothing but problems," said Mr Taylor.

"Of course, we don't think our project is going to solve all of the country's problems, but the first thing is to engage British Pakistanis to try to change the nature of the conversation.

"Only a week ago the media was full of a debate about whether we should help Pakistan when they don't even pay their taxes. A more positive conversation would make a useful contribution."
Change perceptions

The project recognises the many issues facing Pakistan - according to the World Health Organisation one in four Pakistanis live in poverty, and one in 14 children die before their fifth birthday.

Anwar Akhtar, director of Samosa, worries this situation could deteriorate.

"Pakistan's population will double over the next two or three generations. Without further provision of infrastructure, health, education and welfare, Pakistan's problems could worsen."

Those behind the project hope that by documenting positive stories in Pakistan it not only helps to change perceptions but could inspire others to follow suit.

There are also hopes to create a crowd-sourcing platform alongside the project that would mean people could directly contribute to projects similar to those shown.

Mr Taylor is optimistic that the project can have further ramifications.

"I think that's it's very clear that democracies are made possible not just by the rules of democracy - how many people vote and whether the rules of law is observed - but it's also to do with the health of civil society.

"This project talks about civil society and so contributes towards Pakistan being a democratic country."
'All-pervasive fear'

One of the most powerful accounts already featured on the website is that of Asma Jahangir, a Pakistani lawyer and human rights activist, who believes that Pakistan is at a crucial juncture.

"In one way it is very scary [where Pakistan is going]. There is an all-pervasive fear. And the future is very uncertain," she says in the film.

"At the same time, there are some very positive developments in the last five years, and that hasn't come from the government, but from people themselves."

Pakistan Calling is asking British and Pakistani film-makers to document these developments and add their own videos to the site.

WHat do you think of this?
http://alturl.com/gxp9v

Is it appropriate satire, or do you feel that Kunwar Sahib has crossed the line of propriety?

The seaside metropolis of Karachi is Pakistan’s largest city, its commercial hub and a city plagued by violence. Adding to the already volatile mix is the Pakistan Taliban, which is now firmly embedded in Karachi. But amidst the mayhem, businesses are thriving and capital markets are soaring.

In old Karachi, behind metal gates, barriers and security checks is a low-rise office block from which Canadian Nadeem Naqvi steers the country’s largest stock market: the Karachi Stock Exchange, with a market capitalization of $41.5-billion.

Mr. Naqvi moved to Pakistan in 2005 and took on the managing director job in 2011 with a mandate to modernize the exchange.

The KSE has a market capitalization of $41.5-billion – a tenth of the size of the Bombay stock market. Last year, it ranked among the top emerging markets in Asia.

With historic democratic elections scheduled for May 11, Mr. Naqvi spoke to The Globe and Mail about his optimism about Karachi and Pakistan.

What has it been like steering the exchange – it must be a roller coaster?

In one word: exhilarating. Not without sleepless nights, I can assure you. … On the political front there have been ups and downs, although I was lucky enough to be in an era when we had uninterrupted democratic set-up – the quality of that democratic set-up as a point aside. But that was a first for Pakistan. And now we are in the process of the first democratic transfer of power from one democratic set-up to the next … We have faced direct backlash as a result of Pakistan’s role in terms of war on terror and the backlash Pakistanis have to face every day. But within that dire dynamics you have seen a stock market that has performed incredibly well last year. It was up 50 per cent in local currency terms – the KSE100 Index – and it was up 36 per cent in U.S. dollar terms making it one of the top three best performing emerging markets in Asia last year.....

Here is a list of countries sorted according to their HOUSEHOLD savings rates in 2010: