A British officer has recently been fired for putting his Pakistani wife on a terror watch-list, according to a report in The Daily Mail. 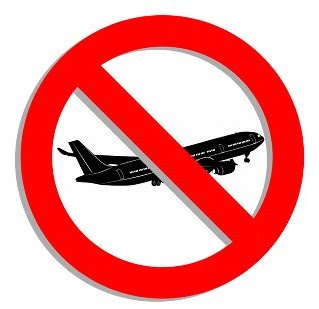 He used his access to security databases to include his wife on a watch list of people banned from boarding flights to Britain because their presence in the country is "not conducive to the public good".

As a result the woman was unable for three years to return from Pakistan after traveling to the county to visit her family.

The act went unnoticed until the immigration officer was selected for promotion and his wife's name was found on the suspects' list during the vetting process.

The British Home Office said that the officer has been fired for gross misconduct.

This is not the first time that questions are being raised about the no-fly list. The process of adding names to the list has been a mystery since it was first launched in September, 2001. It contains names of little children, and of people who have long been dead.

Officially, the process to add or delete people from the list has been a closely guarded secret, with only bits of information made public during US congressional hearings, according to Wired magazine.

Even though the list has grown, but it did not contain the name of airline passenger Umar Farouk Abdulmuttalab, according to ABC news. The Nigerian tried to bomb a Detroit-bound Northwest airlines flight on Christmas Day using explosives packed in his underwear.

Here is how Wired magazine and AP have described the process:

The first step might be a simple tip to law enforcement or an intelligence agent or may come from information gleaned from a wiretapped conversation. The tip is submitted to the National Counterterrorism Center in Virginia, where it’s entered into a classified database known as Terrorist Identities Datamart Enterprise, or TIDE. The database might include a suspect’s name and relatives and associates. About 2 percent of the names in the database belong to Americans.

Here information is data-mined to connect dots and flesh out partial names and identities. If enough information can be connected to a Terrorist Watchlist target, it’s escalated to the Terrorist Screening Center, also in Virginia, for more analysis. About 350 names are sent to the screening center daily.

Depending on what the analysis turns up, a suspect might wind up on the FBI’s terror watchlist, which includes the names of about 418,000 people — including a New Jersey eight-year-old who regularly gets frisked at the airport. Airport security personnel use the list to single out some travelers for extra screening or interrogation, and the watchlist is also used for screening U.S. visa applicants and gun buyers, as well as suspects stopped by local police.

To get on this list, there must be “reasonable suspicion” that the person is involved in terrorism, according to the AP. People whose names are on this list are singled out for questioning at U.S. borders, but they can still fly. A Justice Department inspector general report last year found that the FBI was mishandling the watch list and failing to add legitimate suspects under terrorist investigation to the list; at the same time not properly updating and removing records from the list so some U.S. citizens are subjected to unjustified scrutiny.

In order to get on the no-fly list, authorities must have the suspect’s full name and age and have information indicating that the suspect is a threat to aviation or national security. The final decision for adding a name to the no-fly list rests in the hands of about six people from the TSA, the AP said.

At this point, a suspect can either be added to a “selectee list,” a list of about 18,000 people who are singled out for extra screening at airports or be put on the no-fly list. Not all people on the no-fly list are prevented from flying, however. Sometimes authorities allow them to travel unimpeded, but place a tail on them to monitor their activity, the AP said.

Originally intended to be a serious intelligence document, FBI agent Jack Cloonan told CBS that the No Fly List has become a "cover your rear end" document designed to protect bureaucrats and make the public feel more secure.

"I know in our particular case they basically did a massive data dump and said 'Ok anybody that’s got a nexus to terrorism, let’s make sure they get on the list,'" Cloonan explained. "And once that train left the station, or once that bullet went down range. There was no calling it back. And that is where we are."

Inside the Mind of Times Square Bomber

Milgram's Experiments on Obedience to Authority
Posted by Riaz Haq at 11:26 AM

Here's a Guardian report suggesting that the Pakistani-American who trained 7/7 London bombers was an FBI informer:

An American jihadist who set up the terrorist training camp where the leader of the 2005 London suicide bombers learned how to manufacture explosives, has been quietly released after serving only four and a half years of a possible 70-year sentence, a Guardian investigation has learned.

The unreported sentencing of Mohammed Junaid Babar to "time served" because of what a New York judge described as "exceptional co-operation" that began even before his arrest has raised questions over whether Babar was a US informer at the time he was helping to train the ringleader of the 7 July tube and bus bombings.

------
Lawyers representing the families of victims and survivors of the attacks have compared the lenient treatment of Babar to the controversial release of the Lockerbie bomber, Abdelbaset al-Megrahi.

Babar was imprisoned in 2004 – although final sentencing was deferred – after pleading guilty in a New York court to five counts of terrorism. He set up the training camp in Pakistan where Mohammad Sidique Khan and several other British terrorists learned about bomb-making and how to use combat weapons.

Babar admitted to being a dangerous terrorist who consorted with some of the highest-ranking members of al-Qaida, providing senior members with money and equipment, running weapons, and planning two attempts to assassinate the former president of Pakistan, General Pervez Musharraf.

But in a deal with prosecutors for the US attorney's office, Babar agreed to plead guilty and become a government supergrass in return for a drastically reduced sentence.

The Guardian has obtained a court document which shows that on 10 December last year – six years after his initial arrest and subsequent guilty plea – he was sentenced to "time served" and charged $500 (£310) by the court in a "special assessment" fee. The document also reveals that Babar had by then spent just over four years in some form of prison and more than two years free on bail.
----------

Freed from prison and no longer in the witness protection scheme, it is not known where Babar is currently living. Visiting Babar's childhood home in the Jamaica area of Queens, New York, the Guardian was told that Babar's mother was on holiday in Pakistan. The woman who answered the door and identified herself as Babar's cousin did not know where Babar was living and refused to comment further.

On many Pakistani websites he and many others have been linked to RAW as well!! I will not be surprised Pakistan is being used as a pawn of India