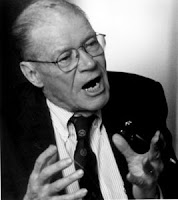 Donald #Rumsfeld’s Fog of Memos. He was ambitious, driven — also lucky. And, as we all know, he was one of the chief architects of the disastrous #IraqWar. #Afghanistan #saddamhussein #GeorgeWBush #MiddleEast https://www.nytimes.com/2021/07/03/opinion/errol-morris-donald-rumsfeld.html?smid=tw-share

Mr. Morris is the director of a 2013 film about Donald Rumsfeld, “The Unknown Known.”

It is impossible for me to write about Mr. Rumsfeld, the former U.S. secretary of defense who died on Tuesday, without writing about his memos. He played a role in making memo-writing the new frontier in governmental accountability. He also pioneered the memo as an obfuscatory instrument. Write one memo saying one thing, write another memo saying the exact opposite.

As I interviewed Mr. Rumsfeld for my documentary about him, “The Unknown Known,” it became (at least for me) a story about a man lost in his endless archive, adrift in a sea of his own verbiage.

In 1966, early in his public service career, Representative Rumsfeld, Republican of Illinois, co-sponsored the Freedom of Information Act, a vehicle for understanding the intentions of high political figures. Then, as a member of President Gerald Ford’s administration — first as the president’s chief of staff, then as secretary of defense — he found a way to effectively undermine it.


President Richard Nixon was undone by his attempts to conceal and excise the official record. Mr. Rumsfeld knew better by the time he was serving under Mr. Nixon’s successor. The trick was to marginalize the record, to litter it with so many contradictions that a rebuttal to any future historian could always be found. His memos (known as “yellow perils” in the Nixon administration and “snowflakes” under Ford) would pile up in drifts, disguising the underlying historical landscape. It’s a level of genius that has not been acknowledged in the press — the founder of the Freedom of Information Act is the guy who figured out how to render it almost totally worthless.

And what accounts for his seeming change of heart? The metamorphosis from a liberal Rockefeller Republican congressman, a confidant of the civil rights and antiwar activist Allard Lowenstein, to one of the most reviled neoconservatives?

It’s easy to blame everything on opportunism, a swiftly changing environment of success and more success. Vocational greed … I don’t know. But whatever the reason, a new Donald Rumsfeld emerged during the Ford administration.

His first stint as secretary of defense is the start of the story — Team B, in particular. That was an exercise in which a dozen or so defense industry wonks and Russia hawks were given carte blanche to undermine and effectively rewrite the latest National Intelligence Estimate on the Soviet Union, which they argued didn’t reflect the true peril facing America. They called it a “competitive stress assessment” — more confusing verbiage.