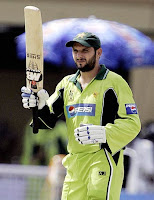 Brilliant all-round performance by Shahid Afridi has taken Pakistan into the ICC World 2020 Finals in England.

Afridi scored an impressive half-century and followed that up by bowling beautifully to claim 2 important SA wickets for just 16 runs.

This came as a huge disappointment to South African team that played well and remained unbeaten in the tournament until the semi-finals with Pakistan.

The powrful South African side were favorites going in to the semi-final and their bowlers bowled well to restrict Pakistan to 149 when, at one stage a total of 170 seemed on the cards. With the exception of Jacques Kallis, though, their batsmen failed to give the chase any sort of direction. They were suffocated by Afridi and the offspinner Saeed Ajmal and their failure to score enough runs during the middle overs left them with too much to do against the pinpoint accuracy of Umar Gul's yorkers.

Afridi, high on confidence after his breezing half century , came into the attack in the seventh over but was immediately driven by Herschelle Gibbs to the cover boundary. That was as bad as his evening got. He bounced back, bowling Herschelle Gibbs with a straight and quick delivery and, an over later, he got AB de Villiers the same way. South Africa were 50 for 3 and struggling.

Pakistan's early dominance was due to Akmal, who was intent on smashing the ball from the start. He cut Dale Steyn twice for four in the first over and lofted him cleanly over long-off in the third. In between, he crashed Wayne Parnell to the midwicket boundary and raced to 23 off 11 balls before top-edging a pull off Steyn to mid-on.

Now on the finals against Sri Lanka or West Indies Sunday June 21, 2009 at Lords.

This is rare good news for Pakistani cricket fans in particular, and Pakistanis in general, amidst a constant stream of bad news. Hope it helps our national psyche and makes us all feel better as a nation.

If Afridi, Akmal and Gul continue their form, I am confident Pakistanis can beat any team in the final…be it Lankans or Windies.

Here's an excerpt from an interesting Times of India blog by Avijit Ghosh:

About a fortnight ago when I wrote the blog, Why Pakistan must win Twenty20 World Cup, I was flooded with colourful abuses. An overwhelming majority of respondents labelled me "unpatriotic." Many appeared convinced that India was going to win the World Cup and that Pakistan will be knocked out in the first round.

They had their reasons, I guess. Some were political and had little to do with cricket. But for a variety of reasons, many genuinely believed that Pakistan wasn't going to put up a good show. To begin with, Younis Khan and company hadn't seen much of international cricket in recent times. That apart, none of them had played in IPL2. Even in the practice games, the team hardly inspired confidence.

No doubt Pakistani cricket team is capable to compete with anyone anywhere in the world, but in my opinion, they need to work on their batting side, because most of the time they are not able to keep their wickets safe. I wish them luck for the future world cup.