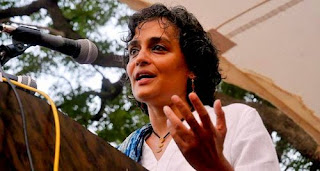 Indian author and activist Arundhati Roy is currently visiting Pakistan. “An individual resorts to taking up weapons only when he does not get justice in society,” she said. Here's a report on what she is saying to her Pakistani audience:

Is there a threat of Talibanization engulfing the entire region?

I think it has already engulfed our region. I think there’s a need for a very clear thinking (on this issue of Talibanization). In India, there are two kinds of terrorism: one is Islamic terrorism and the other Maoist terrorism. But this term terrorism, we must ask, what do they mean by it.

I think both needs to be fought. But if it’s an ideology it has to be fought differently, while if it’s a person with a gun then it has to be fought differently. We know from the history of the war on terror that a military strategy is only making matters worse all over the world. The war on terror has made the world a more dangerous place. In India, they have been fighting insurgencies military since 1947 and it has become a more dangerous place.

Swat and the Taliban boy

It is very important for me to understand what exactly is going in Swat. How did it start? A Taliban boy asked me why women can’t be like plastic bags and banned. The point is that the plastic bag was made in a factory but so was the boy. He was made in a factory that is producing this kind of mind(set). (The question is) who owns that factory, who funds it? Unless we deal with that factory, dealing with the boy doesn’t help us.

Water is the main issue

One danger in Pakistan is that we talk about the threat of Taliban so much that other important issues lose focus. In my view, the problem of water in the world will become the most important problem. I think big dams are economically unviable, environmentally unsustainable and politically undemocratic. They are a way of taking away a river from the poor and giving it to the rich. Like in India, there’s an issue of SEZs (Special Economic Zones), whereby the land of the people are given to corporations. But the bigger problem is that there are making dams and giving water to the industries. This way the people who live in villages by the streams and rivers have no water for themselves. So building dams is one of the most ecologically destructive things that you can do.

There are thousands of Pakistani and Indian soldiers deployed on the Siachen glacier. Both of our countries are spending billions of dollars on high altitude warfare and weapons. The whole of the Siachen glacier is sort of an icy monument to human folly. Each day it is being filled with ice axes, old boots, tents and so on. Meanwhile, that battlefield is melting. Siachen glacier is about half its size now. It’s not melting because the Indian and Pakistani soldiers are on it. But it’s because people somewhere on the other side of the world are leading a good life….in countries that call themselves democracies that believe in human rights and free speech. Their economies depend on selling weapons to both of us. Now, when that glacier melts, there will be floods first, then there will be a drought and then we’ll have even more reasons to fight. We’ll buy more weapons from those democracies and in this way human beings will prove themselves to be the stupidest animals on earth.

Money and the Indian elections

Whatever system of government you have, whether it is a military dictatorship or a democracy, and you have that for a long time, eventually big money manages to subvert it. That has begun to happen even in a democracy (like India). For example, political parties need a lot of publicity, but the media is also run by corporate money. If you look at the big political parties like the Congress and the BJP, you see how much money is being put out just in their advertising budgets. Now where does all that come from?

RSS and the Indian establishment

The RSS has infiltrated everything to a great extent. In India, we have 120-150 million Muslims and it’s considered a minority…It’s impossible to not belong to a minority of some sort in India. Caste or ethnicity or religion or whatever, in some way everyone belongs to a minority. The fights that many of us are waging against the RSS and against the BJP are to say that we live in a society which accommodates everybody. Everybody doesn’t have to love everybody, but everybody has to be accommodated. The RSS has infiltrated the (Indian) army as much as various kinds of Wahabism or other kinds of religious ideology have infiltrated the ISI or the armed forces in Pakistan. They are human beings like everyone else and they too get influenced.

Indian media and sensationalizing of news coming out from Pakistan

The Pakistani media is a little different from the Indian media. They stand on a slightly different foundation. But both share the problem of a lack of accountability…The trouble in India is that 90 per cent of their revenue comes from the corporate sector…there’s increasing privatization and corporatization of governance, education, health, infrastructure and water management. So in India you see an open criticism of governance, but very rarely criticism of corporations. It’s a structural problem. It’s not about good people or bad people. It’s just that you can’t expect a company to work against itself. This is a very serious issue which needs to be sorted out.

Is the Indian army a sacred cow?

The Indian army is quite a sacred cow especially on TV and Bollywood. But at the same time if you talk to the people in the Indian army, they say that they feel that the media is very critical of them. I don’t share that view. I think it is a sacred cow. People are willing to give them a lot of leeway.

Women and their fight for justice

Arundhati Roy on Kashmir
Posted by Riaz Haq at 7:35 PM

Thanks goodness. Pakistan is saved! Arundhati to the rescue!

Agree with the Taliban boy as far as Arundhati is concerned.

the above comment must have been made by osama bin laden or one of his deputies.

Here's a Guardian report indicating Indian govt's intent to arrest and prosecute Arundhati Roy for sedition for her remarks on Kashmir:

India's home ministry is reported to have told police in Delhi that a case of sedition may be registered against Roy and the Kashmiri separatist leader Syed Ali Shah Geelani for remarks they made at the weekend.

Under section 124A of the Indian penal code, those convicted of sedition face punishment ranging from a fine to life imprisonment.

Roy, who won the Booker in 1997 for The God of Small Things, is a controversial figure in India for her championing of politically sensitive causes. She has divided opinion by speaking out in support of the Naxalite insurgency and for casting doubt on Pakistan's involvement in the 2008 Mumbai attacks.

The 48-year-old author refused to backtrack. In an email interview with the Guardian, she said: "That the government is considering charging me with sedition me has to do with its panic about many voices, even in India, being raised against what is happening in Kashmir. This is a new development, and one that must be worrisome for the government."

"Threatening me with legal action is meant to frighten the civil rights groups and young journalists into keeping quiet. But I think it will have the opposite effect. I think the government is mature enough to understand that it's too late to put the lid on now," Roy said.

Earlier the author, who is currently in Srinagar, Kashmir, said in a statement: "I said what millions of people here say every day. I said what I, as well as other commentators, have written and said for years. Anybody who cares to read the transcripts of my speeches will see that they were fundamentally a call for justice.

"I spoke about justice for the people of Kashmir who live under one of the most brutal military occupations in the world; for Kashmiri Pandits who live out the tragedy of having been driven out of their homeland; for Dalit soldiers killed in Kashmir whose graves I visited on garbage heaps in their villages in Cuddalore; for the Indian poor who pay the price of this occupation in material ways and who are now learning to live in the terror of what is becoming a police state."

After describing her meetings with people caught up in the Kashmir violence, she said: "Some have accused me of giving 'hate speeches', of wanting India to break up. On the contrary, what I say comes from love and pride. It comes from not wanting people to be killed, raped, imprisoned or have their fingernails pulled out in order to force them to say they are Indians. It comes from wanting to live in a society that is striving to be a just one.

India's justice minister, Moodbidri Veerappa Moily, described Roy's remarks as "most unfortunate". He said: "Yes, there is freedom of speech … it can't violate the patriotic sentiments of the people."

Others were less restrained. One person posted a comment on the Indian Express newspaper website calling for the novelist to be charged with treason and executed.

Roy said she was not aware of the calls for her death, but said the comments were part of a "reasonably healthy debate in the Indian press".

"The rightwing Hindu stormtroopers are furious and say some pretty extreme things," she told the Guardian.

Roy made her original remarks on Sunday in a seminar – entitled Whither Kashmir? Freedom or Enslavement, during which she accused India of becoming a colonial power. Geelani also spoke at the seminar.