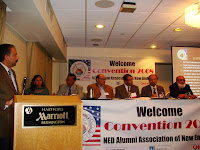 NED Alumni Convention 2008 in Hartford, Connecticut attracted over 400 NEDians and their families and friends this year on Nov 1, 2008. This was the fourth successful North America annual convention of NED University alumni after Houston, New Jersey and Silicon Valley conventions. It consisted of a day-long conference with keynote speeches and panel discussions followed by a gala event in the evening with a banquet, fashion show, concert and stand-up comedy. New England NEDians led by Abul Islam and Aslam Siddiqui put on a very useful conference and a great show to try and mobilize NEDians to help their alma mater. The speeches highlighted the rich heritage of NEDUET, our alma mater, as the oldest institution of higher technical learning while the panel discussions centered around the state of science and technology education, NEDUET's controversial ranking by the HEC, and how to help make it better. The specific steps and actions to coordinate efforts between North American Alumni and NEDUET will hopefully be forthcoming after this convention, which was also attended by Dr. Shamsul Haq, the Pro VC, Dr. Farooq Rafiqi, the Dean of Civil Engg, and Dr. Sarosh Lodhi, the Chairman of Civil Engg Dept. at NED University.

NEDUET Alumni Convention 2009 is planned for July 18 in Anaheim, California, across from Disneyland. The planning sessions have already been kicked off by Southern California NEDians, the proud hosts of next year's convention.

NEDUET and HEC Ranking Controversy
Posted by Riaz Haq at 7:06 AM

Amid the concerns for the state of education in Pakistan, Asif Zardari has decided to make Mir Hazar Khan Bijrani his federal education minister.

Mir Bijrani is known for being part of a jirga that ordered giving away little girls as part of settling a dispute in Jacobabad.
The innocent girls including Tasleema (3), Farzana (4) and Naseera Solangi (6), who had been ordered by jirgas in Jacobabad to be given as compensation to the aggrieved parties, were also present on the occasion with their parents, according to Dawn.

Another new federal minister in Zardari's cabinet is Senator Israraullah Zehri who defended the live burial of several women recently in the Senate as an acceptable "Baloch tradition".

What do you expect from a mentally retarded president.... When are you going to write an original blog celebrating President Hussain's Victory