After a string of 12 test match losses over the last three years, Pakistan won convincingly today against New Zealand by 141 runs at the Basin Reserve in Wellington. Pakistan's bowling attack, the Akmal brothers superb batting performance and patient scoring and leadership by Mohammad Yousuf were crucial in winning.

Pakistan's terrible test cricket performance has been in sharp contrast to its successes in T20 matches, including the World Championship. 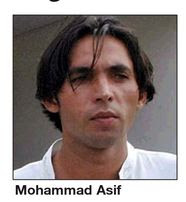 As always, Pakistanis owe their test win to the great bowling attack led by Asif and Kaneria. The win came in spite of the lackluster Pakistani fielding with over half dozen dropped catches, particularly in the second innings.

In recent international tournaments, India have been sent home early during 2009---T20 in England and ICC Trophy in South Africa.

While Pakistan won the T20 title in England, Indians couldn't even make the semis. In ICC trophy, India were eliminated early while Pakistan defeated India and made it to the semi-final.

In terms of the history of India-Pakistan cricket encounters in all three formats, Pakistanis continue to have an edge over their Indian rivals:

India far ahead of Pakistan in both test and ODI ranking.