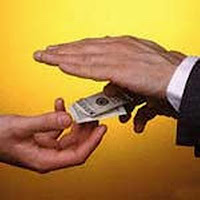 Halliburton is the latest in a string of Western companies settling charges or paying fines in connection with bribing foreign officials to get contracts. The company has agreed to pay $559 million to the U.S. to settle charges that one of its former units, Kellog, Brown and Root, bribed Nigerian officials during the construction of a gas plant, according to media reports.

The case under the U.S. Foreign Corrupt Practices Act against Kellogg, Brown & Root engineering unit stems from the construction of a giant liquefied natural gas plant on the Nigerian coast near Port Harcourt from 1996 through the mid-2000s. KBR was part of a consortium that built the facility, which at the time was the largest industrial investment ever made in Africa. Former U.S. Vice President Dick Cheney was the CEO of Halliburton during this period. Mr. Cheney is not named in the Justice Department charges and there is no evidence Mr. Cheney knew of the bribes.

The $559m payment would be the largest paid by a U.S. company in a bribery investigation, eclipsing the previous record $44 million fine in 2007 against U.S. oil-field services firm Baker Hughes Inc. for improper payments in Kazakhstan. In December, German industrial conglomerate Siemens AG agreed to pay $800 million in U.S. fines to settle bribery investigations involving alleged payments to government officials around the world to win infrastructure contracts. As part of the settlement, Siemens didn't admit to bribery allegations but it admitted to having had inadequate controls and keeping improper accounts.

There is a lot of anecdotal evidence of widespread corruption in many parts of the world. The rarity of the formal charges or convictions indicates that the behavior of large multinationals in their dealings with corrupt politicians and officials in many Asian and African countries has received only scant attention. There have been serious allegations and at least preliminary evidence to suggest that illegal payments were made to Bhutto-Zardari controlled fronts by companies in France, Switzerland and Poland. There was some action pursued in Switzerland at the request of Pakistani Government under Pervez Musharraf. However, France and Poland have not pursued the charges of corruption involving their companies in Pakistan. The only explanation being offered is that foreign corruption laws did not exist in France prior to the year 2000.

There are currently laws on the books in the West such as the Foreign Corrupt Practices Act (FCPA) in the United States. Almost all ethics classes taught in the Western management schools and company training courses cover this topic. However, the question is whether these laws are really enforced and how often are the companies held accountable? Or do they simply rely on the foreign governments to report misbehavior? It would be a fantasy to expect the officials and politicians on the receiving end to report incidents of bribery as they are the main beneficiaries. But I think the German, French, US, British and other governments of developed nations who claim higher moral positions should be cracking down on these reprehensible practices just to enforce their own laws and live up to their own higher standards. While it may be argued and it is like putting the shoe on the wrong foot, I see it as the only hope we have of containing such widespread corruption in developing nations that is robbing their people blind.

they are offering more money to get out of corruption charges. wah wah

It does seem a little strange that they are "bribing" their way out of trouble. But, in reality, the $559m payment is a fine agreed in front of a judge and the money goes into the US treasury, not in the pockets of the officials as it often does in developing nations.

Let's hope it proves to be a sufficient deterrent for other US companies rather than just another cost of doing business in the developing world.

So this is bribing US government to get out of the same crime they committed in a different country.

That means US government is asking US organizations to bribe the corrupt politicians whereever they can to do business make lot of money by doing bad job because they paid bribe and then come back to US and clean yourself by paying US government to wash themselves clean.

A jackpot for US government and its companies in this case.

Zafar,
If the US and other western governments use the extra funds collected as fines from the companies to beef up enforcement of foreign corruption laws, I think it will be a very beneficial to countries such as Pakistan and Nigeria. It will send a signal to the corrupt officials and politicians in developing nations that they are going to get scrutiny. A few hundred million dollars used for this purpose should be welcome news for the people of developing nations.

I don't agree to your argument as I believe it only strengthen the corrupt politicians in our countries as they are not accountable to anyone. US government is making money but not actually stopping these organizations from doing it again.

One can make billions in these transactions and then white wash it by paying few hundred millions, what is stopping them to do it again.

The government of the Indian capital, Delhi, has been paying salaries to 22,853 civic workers who do not exist.

Salaries for the missing Municipal Corporation of Delhi workers add up to nearly $43m a year, City Mayor Kanwar Sain said in a statement.

The "gap" was discovered after the authorities introduced a biometric system of recording attendance.

Correspondents say it shows some civic officials created a list of "ghost workers" to siphon off state funds.

The Municipal Corporation of Delhi (MCD) employs more than 100,000 cleaners, gardeners, teachers and other workers.

City officials became aware there were thousands of "ghost workers" after introducing the biometric system in August last year.

A press release issued by Mayor Sain's office said: "There is a gap of 22,853 employees in the Municipal Corporation of Delhi between the data given by drawing and disbursing officers, the head of the department and the number of employees enrolled for biometric attendance."

An "in-depth vigilance inquiry will be conducted into the matter to ascertain the facts," he said.

"Strict disciplinary action will be taken against officials who cooked the books," the mayor said.

It was long suspected that the city was being defrauded by "ghost workers", but the authorities had always denied the charge.