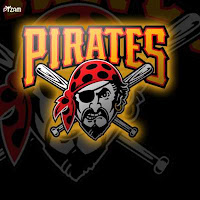 While the Indian Navy is going after the pirates in the Gulf of Aden, two Indian youngsters are joining the Pirates in the United States.

Rinku Singh and Dinesh Patel are two 20-year-old pitchers with million dollar arms. Neither had picked up a baseball until earlier this year. Both have now signed free-agent contracts with the Pittsburgh Pirates, the prestigious five-times winners of the Major League Baseball World Series. They were the top finishers in “Million Dollar Arm,” an Indian reality TV show that searched for potential Major League Baseball talent in the country with millions playing cricket. They are believed to be the first athletes from India to sign professional sports contracts outside their country in a sport other than cricket. These contracts open up new and lucrative opportunities for South Asian cricketers beyond India's new cricket leagues.

The faster of the pair, Patel has clocked at 91-92 mph pitching speed, significantly slower than Pakistan's Shoaib Akhtar's 100.3 mph considered the world's fastest bowling speed in cricket. The pirates see a lot of potential in both Singh and Patel as successful pitchers for their team.

"This is really big news," said JB Bernstein, a promoter and marketing agent who created the "Million Dollar Arm" contest in India that brought attention to the Indian boys. "I think when the boys return to India, that's when it will really reach its crescendo."

Singh and Patel will soon return to India for a 10-day visit. They haven't seen their families since the beginning of May, when both moved to the U.S. to train under University of Southern California pitching coach Tom House.

The signing got special attention from the US ambassador to India and the ambassador called a press conference to talk about it. The Indian media are now covering the story and their return to India is expected to generate a lot of enthusiasm.

It all started with an idea from Bernstein to see what type of baseball talent could be found in India. He developed the idea for a contest for boys and men between the ages of 16 and 21. The parameters were simple: see who could throw a baseball faster than 85 mph and for strikes.

Patel and Singh were among more than 37,000 people to try out, and both quickly emerged as finalists. The winner of the contest was set to receive a $100,000 prize and the opportunity to train with House.

The American Baseball sports agents have long been sourcing talent from Cuba, Dominican Republic and Japan. The inclusion of Indian players appears to be a way to open the vast Indian market for US Major League Baseball. Indian MLB franchise teams could potentially significantly enlarge the current $6b revenue opportunity to the South Asian and international media market. The MLB World Series games have been shown live in many countries of the world, including India. In October of this year, the Major League Baseball International broadcast the Fall Classic in 13 languages to 229 countries and territories around the world.
Posted by Riaz Haq at 9:56 PM

you are doing great job some thing missing about indian attacks.

I strongly condemn the terror attacks in Mumbai today. But it's too early to write about the details, causes and implications of Mumbai terror attacks without fully understanding what has actually transpired. I have talked about issues that could possibly be related to such terrorist violence in a post on the 21st century challenges for resurgent India recently. Please take a look at
http://southasiainvestor.blogspot.com/2008/11/modern-india-21st-centurys-economic.html

Pittsburgh Pirates should be always competitive enough to keep pace with the others. I really like them; they’ve always been my favourite teams in MLB. Just read about them here:
http://www.piratesdaily.com

#Pakistan has a vision for #baseball success. Pakistan plays at the #Panama City World Baseball Classic Qualifiers, hoping to be one of the two nations who will advance to the main international baseball tournament in March, 2023. https://www.mlb.com/news/pakistan-baseball-has-high-hopes-at-world-baseball-classic-qualifier via @mlb

Pakistan became beloved underdogs at the Brooklyn Qualifier in 2016 -- its first international tournament outside of Asia -- as they were the only team to field a club made up entirely of players who grew up and played baseball in their home country. Many of its best stars, like Zubair Nawaz, were cricket players who had recently converted to baseball for the tournament.

In a way, Syed Fakhar Ali Shah has been preparing for this his entire life. The current manager of Team Pakistan's Baseball Team and the head of its baseball federation, Shah was there as a young child at the first ever Pakistan Baseball Federation event in 1992.

"I'm 7 years old and I am sitting in the Federation's official meeting. I'm [there], attending as a founding member in 1993," Shah said. "Nobody in the world is going to believe that a person who is around seven-and-a-half was officially taking care of the meeting while baseball was being introduced!"

Shah's father, Syed Khawar Shah -- who passed away in 2018 -- assembled the group and gifted his son the baseball dream when Pakistan first fielded a team before the 1992 Olympics.

"Everyone who worked in sports was invited," Shah said. "There were 50 people -- educated, sports-related, people with a master's degree, who ever played for Pakistan in other sports was there. My father said, 'We're going to have baseball in Pakistan and you'll have a national championship in two months.' They were like, 'What's baseball?'"

Since then, Shah has devoted his life to baseball, helping get the program ranked as high as 23rd in the world despite lacking a single baseball-dedicated field in the country. Shah played catcher for Pakistan's National Team in 2003 -- taking the position no one else wanted and making sure that he was skilled enough that no one could accuse the team of nepotism.

"The first time I played, I was like, 'I have to be number one.' Because it's my father's dream," Shah said. "And if I play well, I help the team win. I don't want people to feel that it's because of his father that he's playing."

He even oversaw youth teams when he was just 16 years old. When it came time for them to travel to tournaments in Asia, another manager who was an actual adult had to step in. After all, how can you be taken seriously on the international circuit when you have a teenager at the helm?

Those decades of work have now led to this weekend, when Pakistan plays at the Panama City World Baseball Classic Qualifiers. They hope to be one of the two nations who will advance to the main tournament in March. It's a big stage to play on, as Pakistan's competition includes established baseball nations like Panama and Nicaragua and emerging programs like Argentina and Brazil.