Benzir Bhutto on the Big Screen 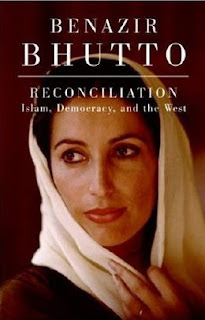 A Pakistani film company is rushing into the production of a movie based on the life of slain former premier Benazir Bhutto in collaboration with noted Indian filmmaker Mahesh Bhatt, according to a news report in Pakistan Link.

Given the multi-dimensional significance of Benzair Bhutto to Pakistan and the world, it is not surprising that Lollywood and Bollywood together see her as an interesting subject to put on the big screen. What is surprising is the following statement by producer Aneela Khan: “The film is going to be released internationally and we don’t want to create any controversy with this film. The basic motive behind this announcement is just to dedicate this film to Benazir Bhutto."

While there is no question that Benazir Bhutto has left a deep mark on Pakistan's history and psyche, it is hard to imagine how a movie about her life can be non-controversial. In some ways she was quite traditional. But she also defied tradition in other ways by becoming the first female leader of a Muslim nation. She captured the imagination, love and affection of a large number of Pakistanis but, at the same time, she became the object of serious corruption allegations and required an amnesty to have the cases against her dropped with the US mediation. Some saw her as a democratic leader and savior of Pakistani democracy while others accused her of incompetence, hypocrisy and authoritarian rule. Like her father before her, Benazir elicits strong emotions by her detractors and her supporters. Some regarded her as a leader who stood for democracy while others called her a feudal princess ruling her party by hereditary right as chairperson for life. Some genuinely mourned her passing and called her "Shaheed" while others criticized Ms. Bhutto for perpetuation of monarchical right to rule by naming her 19-year-old son as her successor in defiance of democratic principles

For this film to be reasonably objective and historically relevant, the screenplay can not completely avoid the controversies that surrounded Benazir's life and continue to be debated after her tragic death. These controversies defined her as much as her accomplishments as the first female prime minister of a Muslim nation and a role model for many across the world.
Posted by Riaz Haq at 8:03 AM

There are media reports indicating that Mr. Zardari does not want to see a Bollywood production on the life of her wife Beanzir Bhutto for fear of negative political repercussions in Pakistan for the PPP. There are also reports that Benazir gave the rights to Robert Redford for a Hollywood movie about her life. Let's see who gets there first: Bollywood, Hollywood or Lollywood?