Taliban--Enemies of Pakistan and Islam

With the recent Taliban gains in and around Swat valley, there has been rising concern in Pakistan, even among the Islamist leaders. “According to my knowledge, Taliban have seized control of Buner District too after the Swat valley,” JUI Chief Maulana Fazlur Rehman said a couple of days ago, adding that militants are moving closer to Tarbela Dam from Hazara. “What kind of a message was given to the world by signing a deal with a banned militant outfit,” he questioned. 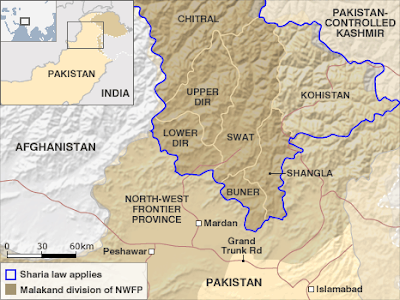 Talking to the media after meeting with Khaksar Tehreek chief Hamidud Din Almashraqi, Hassan said Muhammad had fought counselor elections’ in the past, so he should refrain calling the constitution and National Assembly members’ ‘un-Islamic’.

In an OpEd piece published by the Washington Post, popular Pakistani singer Salman Ahmad and filmmaker Kamran Pasha have now joined the chorus of condemnation of the Taliban. Here's the piece:

The Taliban hordes now sit dangerously close to Islamabad, the capital of Pakistan, and many both inside and outside the country fear that they are poised to possess the souls of a nation of 173 million. As Pakistanis living in America we stand united and join the people of Pakistan to resist the murderous Taliban and their proven malice toward Islam.

Malice toward Islam? But aren’t the Taliban true Muslims who seek only to establish a pure Islamic state based on Sharia, or Islamic law? That is certainly how they present themselves. But the Taliban are no more representative of mainstream Islam than the Crusaders who ransacked Europe and the Middle East were of Christianity. Both the Taliban and their Crusading counterparts represent a political movement meant to dominate and destroy rather than strengthen faith and build human society.

Despite the distorted teaching of extremists like the Taliban, the truth is that the Holy Qur’an does not establish any form of government. Indeed, it is disputes over politics and leadership that split the Muslim community into two sects, Sunni and Shia. The very idea of imposition of religion on others goes against the heart of the Qur’an. In Surah 2:256, the Qur’an says forcefully: “There is no compulsion in religion.”

Even the notion of imposing “Islamic law” is nonsensical, as the very idea of a monolithic body of religious rules agreed to by the Muslim community has no basis in Islamic history. There is no unified notion of Sharia. Over the past 1,400 years, many schools of law have developed, each with its own doctrines and jurisprudence, and with contradictory rulings on many matters. Sharia is not a codified body of rules, but a dynamic interaction between scholars, jurists and the Muslim community.

The idea of imposing a particular opinion on the entire community would have shocked the great Islamic legal thinkers such as Imam Abu Hanifa and Imam Shafi’i.To wage war, topple governments and terrorize a civilian population into accepting one radical brand of religion is by its very essence un-Islamic.

And the brand the Taliban wish to sell is not one the people of Pakistan have any interest in buying. Whenever free elections are held, the Pakistani people consistently reject fundamentalist parties at the polls. In last year’s national elections , Pakistanis living in the North West Frontier Province , bordering Afghanistan, voted for a secular political party. However, it is the failure of both elected governments and military dictatorships, that has allowed armed bullies like the Taliban to threaten the existence of the state.The Pakistani people have been demanding peace, justice,education and economic security from their leaders but instead have been offered corrupt and incompetent leadership for most of its 62 years of independence.The leadership vaccum has to be filled by sincere politicians , an independent judiciary and an army which commits itself to providing peace and security for all of its people.Only a collective,united effort can steer the country away from the edge of a precipice.The Muslim majority of Pakistan easily recognize when politicians are cloaking themselves in religion to secure power over others. The Islam of Pakistan takes inspiration from the tolerant Sufi teachings of poets and philosophers like Rumi,Bulleh Shah and Iqbal.Its the Islam of coexistence, music, art and love. The hijacked Islam of merciless rules, beheadings and floggings has little attraction for Pakistanis and can only be spread through violence, as the Taliban have proved.

Having witnessed up close how the Taliban have destroyed Afghanistan and ruined any chance for that nation’s recovery after the Soviet occupation, it is incumbent on Pakistanis to stand together against these forces of darkness. The fall of nuclear-armed Pakistan to a small band of extremists poses a threat not only to its citizens, but also to the region and the world. If the Pakistani army and politicians will not defend the state from this menace, then the people of Pakistan must rise up and defend themselves.

There are moments in history when we are called to stand and be counted. And today, we proclaim that we stand with the forces of true Islam, of democracy, human rights and freedom, against those who seek to destroy the religion from within.

Pakistan's War is Cultural, Not Military

Salman Ahmad is the founder of the Pakistani rock band Junoon , author of the forthcoming book “Rock n Roll Jihad” and a United Nations Goodwill Ambassador. Kamran Pasha is a filmmaker and the author of “Mother of the Believers,” a novel on the birth of Islam.
Posted by Riaz Haq at 4:04 PM

These guys are nothing. Generaly public are very religious and emotional. They are further fed up with the democractic corrupt government which takes years to give them justice and economic development.

So taliban has rose as the robinhood in the short run and then their develish side will come up. By that time it will be too late for the people and the pakistani establishment.

Salman Ahmad should team up with someone who knows something rather than another know-nothing. The end result: mind-bending gibberish.

Attacking the Talibunnies on a "who represents Islam" basis is the same as playing the guitar while Swat burns. Trying to undermine the Talibunnies' moral authority is a mindless exercise in extreme futility. This kind of writing may be a decent intro to an American audience who sorely need a Pakistan 101. But it serves no other purpose.

Riaz, your assertion that the Taliban are filling a political, judicial and economic vacuum is much more compelling. It's also much more alarming because it implies much broader support than the elitist or out-of-touch media is willing to grant them. Very, very worrisome.

It would be nice if you enlighten your readers about the key elements of Frontier Crimes Regulations and why this draconian law was not abolished in FATA - Actually, Shariah law is less cruel compared to FCR... No wonder people picked what may work for them.

Pakistan's Flintstones, a bunch of rag tag barbarians, were the love child of the Pakistani government and the Pakistani army and now they are disowning their own Frankenstein kids.

Maximum west would carve out the nuclear area and make it safe through their money and power and leave the remaining to taliban.

Here is a BBC report about Taliban's brazen Kabul attacks and how the Taliban deliberately avoided civilian casualties, unlike the Pakistani Taliban:

Here's an excerpt of WSJ review of "Islam Without Extremes" by Turkish author Mustafa Akyol:

Mr. Akyol, a pious Muslim and a classical liberal, begins his case by proposing a serious rereading of the Quran. "The idea of freedom—in the theological, political, or economic sense—was not unknown in classical Islamdom, as some have claimed," Mr. Akyol writes. He notes that the Quran, compiled in the seventh century, broke with the traditions of its time and place—by mandating protections for property, appealing to the judgment of reason and promoting the idea of a rule of law (as opposed to rule by the whim of despots). Taking inspiration from the separation of church and state in the American constitution, Mr. Akyol suggests that a liberal democracy can be built on Muslim soil as long as neither Islamists nor secular strongmen are allowed to mix religion with politics.